SYNOPSIS: Some great romances are destined to be. The Batman/Catwoman series shows readers the romance between Bruce Wayne and Selina Kyle as it changed over their lives, but what about their connections from before they became costumed adventurers? This special one-off issue, meticulously illustrated by John Paul Leon (Batman: Creature of the Night), traces the life of Selina Kyle from her earliest days to her entry into the criminal underworld, and reveals that Bruce was actually a presence in her life all along. Whether it was fate or coincidence, this story gives even more reasons why Selina and Bruce’s connection is one of the most enduring love affairs in comics. 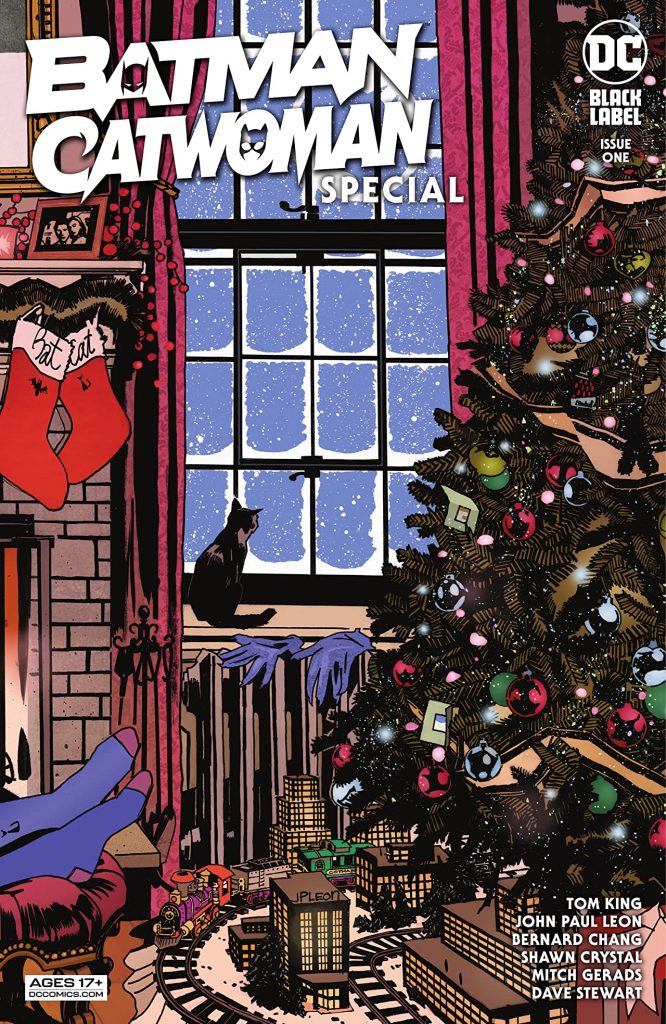 “There’s nothing good about this pain.”

Breaking from the traditional opening of the main Batman/Catwoman series, this special, entitled “Interlude”, eschews the window box opening and Wayne Manor facade, but still keeps its Christmas theme, particularly where Christmas songs are concerned.

Much like the main series itself, this is really Catwoman’s story. King opens the tale with baby Selina, already abandoned in a dumpster, being discovered by a stray cat. From there, we jump forward throughout the years, but always checking in with her at Christmastime.

While this mechanic lets us see all the hardship Selina has had to endure throughout her existence (and all the cats who were her companions along the way), we are also privy to the moments when her life intertwined with Bruce’s, going as far back as her talking to his portrait. Furthermore, while the main series certainly has its fair share of drama and conflict, we do get to see the fleeting moments of happiness that have fallen in the cracks of those pages.

As time marches us on past the events that molded a young Selina into the defiant woman she becomes, her criminal compatriots pop up from time to time. While The Joker makes a smattering of appearances, he doesn’t feel as ingrained in Selina’s life. However, you definitely see the tension between them, particularly as Catwoman gets more hostile in their interactions as the years pass, hinting at whatever is coming in the present day as the Phantasm story continues to unfold.

Perhaps most valuable is when Helena gets added into the mix. This version is such a tabula rasa and King lays out some formative holidays for her. I cracked up when Bruce gifts her with an Nth metal sword and she boldly proclaims, “I AM WONDER WOMAN!” Can you imagine having your parents being friends with Wonder Woman? What a way to grow up!

Helena’s upbringing also adds texture to the Bat/Cat dynamic, bringing a sense of normalcy as they bicker about how to raise her. Adding to this is getting to see Selina bond with her daughter at a time when the main book has them about to be irrevocably at odds. While they lead extraordinary lives, things like being tied upside down over alligators or racing across rooftops come off as commonplace to them and add to the feeling that these are just normal, ordinary people under the kevlar.

The crux of this story, the driving force, is loss. Selina lost her family from the start and eventually makes her own. Bruce’s passing is the turning point, one that sends her on a spiral I fear she won’t recover from. The scene of Selina in front of Bruce’s headstone is heartbreaking, told in a splash page that emphasizes the heaviness and loneliness of her sorrow.

This brings me to the art. This issue was originally scheduled to come out during the summer. Unfortunately, John Paul Leon succumbed to his battle with cancer during the production, leaving his work unfinished. Looking at the credits, he completed the first third, with Bernard Chang and Shawn Crystal finishing up his breakdowns for the next six pages. Mitch Gerads brought it home for the back half of the story. The creative teams did an excellent job in making the book feel consistent artistically and I can’t imagine the incredible pressure the honor brought them. The book looks fantastic and all involved make it easy to distinguish the passage of time.

The conclusion is ambiguous, both in terms of Selina’s fate and when it takes place. However, it does bring us full circle. Following the main story, the back half of the book is a tribute to John Paul Leon. There is an unused cover sketch, page breakdowns, two essays from past collaborators, a Batman: Black & White story from the DC vault, pages upon pages of tribute pinups, and a short story starring The Question. It’s a loving testimony to the wondrous work and inspiration he created during his time on this earth.

It wasn’t supposed to be, but Batman/Catwoman Special #1 showcases the impact one man can have on the lives of millions, be that man one of pencil and ink or flesh and blood. As Selina mourns the loss of her husband, the comics world mourns the loss of not just a collaborator, but a true friend. Like The Batman, John Paul Leon will remain eternal through his work. – Javier E. Trujillo