SYNOPSIS: The Lazarus Tournament has ended, but Mother Soul is not going down without a fight! As Damian Wayne battles for the fate of his family line, a last-ditch effort by an unlikely ally will lead to a major power shift in the DCU! It’s Robin versus his hyper-powerful great-grandmother in a battle so gripping you’ll need an extra butterscotch candy from her little dish to make it through! 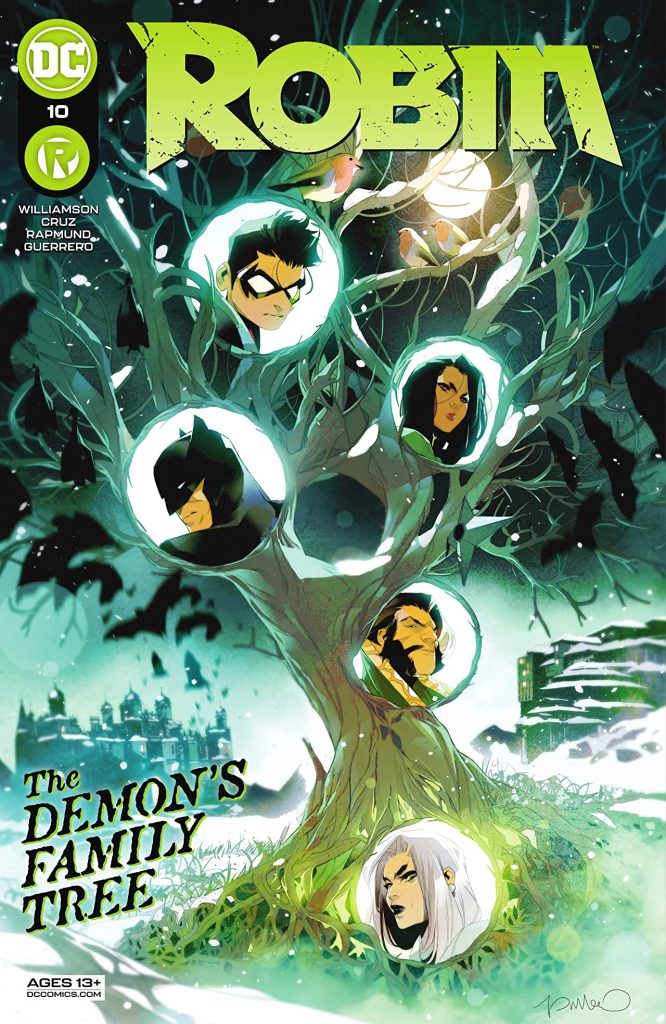 Well, I certainly didn’t expect time travel to pop up in this arc, but this issue opens with Damian thrown back in his family’s timeline, in an era before his grandfather takes on the identity of Ra’s al Ghul!

Meeting a young, well, younger, Mother Soul in prayer to an idol of The Demon, Damian obtains insight into his family’s beginnings, even running into his grandfather, who in this time period is the sultan’s physician and a believer in science over mysticism.

Williamson adds in his own layers and backstory into the al Ghul family history, building upon the foundations established by the work of Denny O’Neil and others. I feel the additions work, adding more texture to the dynasty and giving Damian a different perspective. Seeing him display a moment of compassion towards his grandfather as his great-grandmother dies in the past is a small, yet monumental, display of how far he has grown.

This is comics, though, and Williamson doesn’t waste any time explaining how Damian wound up in the past. While it could have been fascinating spending more time bouncing around in history, Williamson keeps it taut, giving us just what we need to know so we can move the story forward to the next big arc.

Roger Cruz is back on pencils and just like before, he’s such a good fit for this book and the look Gleb Melnikov has established. He knows what images to focus on and varies up his layouts for maximum impact. In particular, he has two splash pages that I enjoyed and I particularly appreciated how he interpreted the bat demon that opposes the al Ghuls. Also, the Neal Adams influence on his Ra’s al Ghul was a nice touch!

Luis Guerrero is no slouch on colors, either. He utilizes so many shades of green throughout, even in dialogue where cries for Mother or a cough stand out brightly against the word balloons. Not to be left out, Damian gets some Robin Red highlights as well, to add emphasis to appropriate moments. It’s a fun little way to underscore allegiances!

I thought this issue was a clever way to work in the secret backstory that has been driving this series so far, setting the stage for the next big arc. Williamson has deepened the mythology and given readers an understanding of the different factions that are about to come into conflict. He’s got some big things building at DC and I am on board for the ride! – Javier E. Trujillo