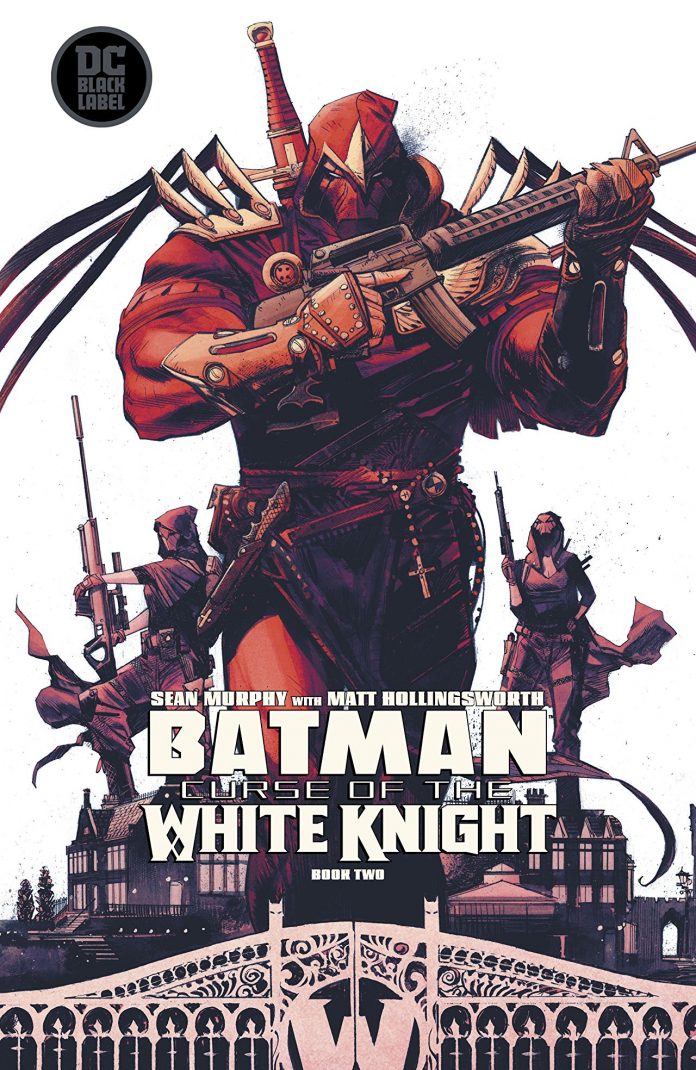 SYNOPSIS: The Joker’s plan is in full swing—with a single devastating secret and his puppet strings controlling the elites, the Clown Prince and his new recruit, Azrael, are ready to eliminate Batman and obliterate the Wayne family’s legacy. With Gotham City’s identity and institutions hanging in the balance, Gordon makes a surprising public announcement—but The Joker’s response will send the Bat-family and the GTO spiraling.

To move forward, you’ve got to go back.

Sean Murphy gives us a history lesson in this month’s Batman: Curse of the White Knight #2. While the opening pages of last month’s debut issue provided a finite showdown between Edmond Wayne and Lafayette Arkham, here we are introduced to the long journey of their meeting.

Meanwhile, in the present, Gotham’s Bat-family is falling apart. Allies are fighting. Bruce Wayne is threatened. And one hero’s secret identity is exposed. And that’s not even factoring in Azrael’s threatening presence and that damn Clown Prince of Crime.

I wonder if Sean Murphy gets nervous over fan reaction to his work anymore. Because as I see it, he’s 10 issues into White Knight (counting the first series) and all of them are knockouts. I didn’t have doubts when a sequel was announced, I just had no idea where the story would go. Then issue #1 set the table for a wild ride. And now, issue #2 ups the ante…AGAIN!

I’m at a loss for words here. Not in a negative way, I’m just not sure how to praise this guy anymore with different words. This Batman story has me just as excited as the last one did, and I cannot wait for the next issue. Yes, it’s JUST as good as everything before it.

And yes, even Azrael, which is big for me as I don’t care for the character. All of these factors are shaking up Curse and making the Dark Knight’s life very difficult. I’ve often read that writer’s need to write their characters into a corner, and the fun is getting them out of it. Well, Murphy has our hero chained in the darkest corners of a dungeon, and I don’t know he’s escaping.

But he will, because he’s Batman.

Since I don’t want to go any deeper into the story (because you should really experience it for yourself), I’ll focus on the art. The transition of the last series into this one is seamless and flawless. This looks like a continuation, as it should. Murphy plays with shadows in such a cool and distinct way, it provides a mood that suits Batman perfectly. Think of it as updated noir, with a few shots of Batman: The Animated Series. His characters are also unique, with a slightly sketchy look to them that I’ve enjoyed since he began drawing them. The art fits the story like a glove.

Batman: Curse of the White Knight #2 cranks this story up to an 11. The odds are stacked against our hero, and there’s no end in sight. Luckily for us, we get to experience it all for 6 more months. – Ryan Lower