SYNOPSIS: The “Justice/Doom War” starts here! The Lex Luthor the League has known and fought is no more, replaced by an apex predator version of Lex, powered by Perpetua with a goal of bringing tragedy to the DC Universe. Now that Lex has powered up villains across the cosmos, he marshals his own troops, sparking a war between the Legion of Doom and the Justice League that will span space, time and the Multiverse itself. This is the start of the next big Justice League event, with consequences affecting “DC’s Year of the Villain” and beyond! 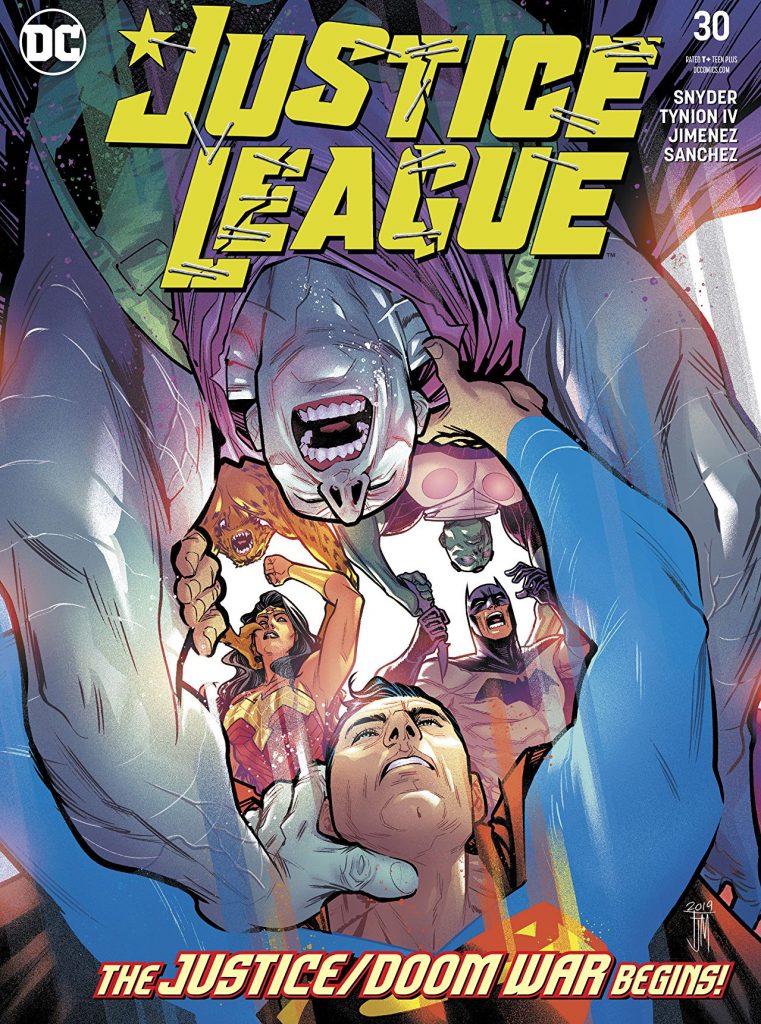 Part 1 of “Justice/Doom War” arrives in the pages of Justice League #30 and it is some of the most compelling storytelling you’re likely to encounter in comic books.

Lex Luthor has been transformed into a near-perfect killing machine, an Apex Predator intent on bringing about Doom to the multiverse. He’s on the verge of killing every single member of the Justice League and its allies. He has unlocked the mother of existence Perpetua (who we finally see awake and doing things!), who is determined to recreate the multiverse as the ultimate weapon. The only thing standing in her way is the Justice League and its expanded roster of heroes.

Scott Snyder and James Tynion IV continue their epic run on Justice League, weaving what is sure to become one of the all-time best storylines focused on the team. It’s a story that’s been gestating for years at this point and honestly a marvel that Snyder has been able to mastermind such an expansive tale over so many issues while pulling in plot details from decades of material. Snyder is at his best when crafting mystery tales, and this one has been building for so long that it’s hard to keep track of everything he’s pulling from and paying off. Luckily, Starman is here to assist the reader.

When Justice League has stumbled a bit it’s been under the weight of needing to relay plot mechanics and big chunks of information in order to package them for the reader. Tynion is never shy about getting wordy, and sometimes the overload can muddy the waters of the story more than I would prefer or become so expansive that it gets in the way of the storytelling. There is a bit of that here as Justice League #30 has lots of words (lots and lots) but the two writers pull this issue off well thanks for some strong structure work and (finally) opening the curtain wider. The middle section drags just a bit and some of the dialogue between character could have been thinned out, but the action heavy opening and closing sequences compensate nicely.

The writing of this issue is at its strongest thanks to the utilization of Starman. Whether its a well-executed glimpse via into the future of a defeated League in order to establish stakes, a recap of the positive energies of creation and their relationship to our heroes, or setting up a time-hopping adventure, Snyder and Tynion have created a focal point to the issue and larger story through a character that has largely existed on the fringes up to this point. Starman functions as a character that can give great insight to the happenings while still providing the reader a vantage point to go along discovering information about the mystery at play here. It’s one of the best aspects of this book and a real highlight.

Jorge Jimenez’s art continues to shine. He’s simply one of the best in the business and delivers pulse-racing action beats and dialogue heavy pages equally as well. The depth and complexity of the story would be too much of a challenge for a less talented artist, but Jimenez creates panels that keep the story moving and visually interesting without letting the words take over entirely. His character work continues to impress, leaning just to the cartoony side of comic art while employing lush scenery with detailed and textured surfaces. The color pallet is gorgeous and rich thanks to Alejandro Sanchez.

This issue really is a strong success. It has action, plot expansion, secrets revealed, high stakes, fantastic art, and sets up the Justice/Doom War to be a must-experience event. – Garret Grev

UPDATED: THE BATMAN Has a Release Date! (And Affleck is Out)