SYNOPSIS: Based on the acclaimed DC graphic novel of the same name, BATMAN: THE KILLING JOKE takes a journey into the dark psyche of the Clown Prince of Crime – from his humble beginnings as a struggling comedian to his fateful encounter with Batman that changes both of their lives forever. Years later, and now escaped from Arkham Asylum, The Joker devises a plan to prove that one bad day can make anyone as insane as he is – setting his sights on Commissioner Gordon. It’s up to the Dark Knight to put a stop to The Joker’s latest scheme and save one of Gotham City’s finest. Following a gripping prologue introducing Barbara Gordon’s heroic adventures alongside Batman as Batgirl, BATMAN: THE KILLING JOKE stays true to the authentic tale that has held fans’ imaginations for nearly three decades – spotlighting the birth of a supervillain, the fortitude of a superhero and the punchline that will leave you speechless. 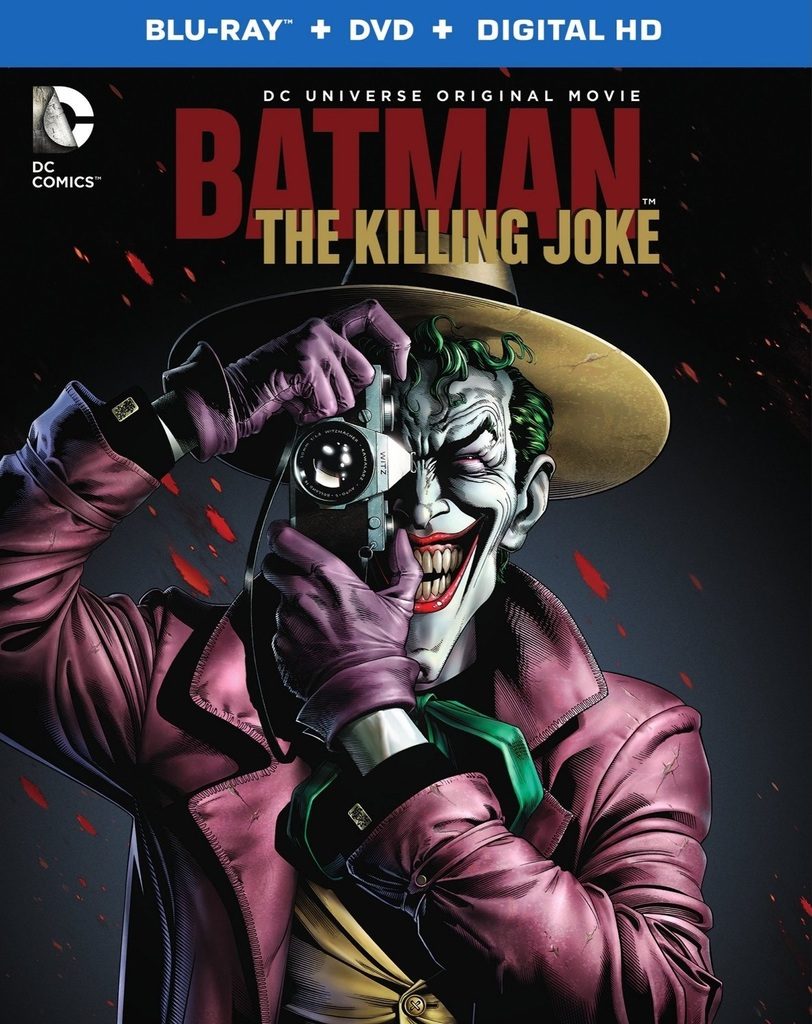 A confession: I’m not a big fan of THE KILLING JOKE graphic novel. I don’t hate it or anything, but I think it’s a bit overrated and there are other Joker stories I like much more. (Heck, even its author – Alan Moore – agrees with me: “I mean, Brian [Bolland] did a wonderful job on the art but I don’t think it’s a very good book. It’s not saying anything very interesting.”)

Regardless of what I (and Alan Moore) think, I’ll concede that it is perceived by many as a classic Batman story and revered by many.

When it was announced a year ago that the folks over at Warner Bros. Animation planned to turn the Alan Moore/Brian Bolland graphic novel into an animated film, I didn’t get excited. If I didn’t particularly like the comic book, I probably wouldn’t enjoy a straight-up film adaptation either. Regardless, I knew I’d watch it because, well, it’s Batman; and I give just about everything Batman a shot.

So last night, I ventured over to my local theater – the Silverado 19 IMAX – to check out the first screening of THE KILLING JOKE’s special, two-day run in theaters. My wife and I got there about an hour and a half early so we could partake in a few “adult beverages” before the movie started. Over the next 90 minutes, we noticed folks in various forms of Batman gear trickle into the theater. By the time we got to our seats, the damn thing was packed with Batman fans.

The first thing I noticed is that the animation is a little better than the trailer led me – and lots of other folks based on their comments – to believe. For some reason, it came off sorta awkward in that trailer, but that wasn’t the case when I saw the film. .

The art design does indeed invoke Brian Bolland’s work in the graphic novel, but I also got a BATMAN: THE ANIMATED SERIES vibe from it as well. Maybe it’s just a subconscious thing due to Kevin Conroy and Mark Hamill voicing Batman and The Joker respectively.

Speaking of the voice cast, Conroy and Hamill are the standouts for obvious reasons. Tara Strong – who has voiced Batgirl/Barbara Gordon many times before – does a fine job as well. Strong is one of the very best voice actors working today, we’ve all heard her in the role before, so, again, you all know what to expect.

So, let’s take a minute to talk about Barbara Gordon/Batgirl, shall we? The first third of the movie focuses on Barbara/Batgirl and is an original story. Apparently, adapting the graphic novel straight-up would not provide enough story for an 90 minute-ish film. Therefore they added a new subplot to enhance the overall story for film. Plus, they wanted to add more “Batgirl” to add a little more emotional impact to what ends up happening to her at the hands of The Joker.

FYI: There will be a major spoiler in this next paragraph. There’s just no way for me to properly review this film without bringing it up and discussing it. Therefore, if you haven’t seen the movie and are avoiding spoilers, scroll on down.

Still with me? Let’s continue…

Part of this new, Batgirl/Barbara focused story deals with, well, the “sexual tension” between Batman and Batgirl. Yes, they end up giving in to their mutual desire for each other, but it wasn’t a big of a deal as some made it to be coming out of the premiere at San Diego Comic Con last week. I’m no prude, but the filmmakers could’ve gotten it across that Barbara and Bruce (or Batgirl and Batman) hooked-up a bit more subtly. The bottom line is that Batman pushes Batgirl away – pretty much fires her – because he’s grown too emotionally attached and doesn’t want anything to happen to her. And of course, something does happen to her and Batman feels responsible.

Look, I get the criticism, certainly. Many times, Batman has been portrayed as a father figure to his sidekicks, Barbara Gordon included. However, Bruce being attracted to Barbara (and vice versa) isn’t something new. In BATMAN: RETURN OF THE JOKER, it was revealed that Bruce and Barbara were once in a relationship. Heck, even in the 60s BATMAN TV series, a sexual vibe between Batman and Batgirl was there in a wink-wink/nod-nod manner. The bottom line for me is that I don’t think this addition to the story was really needed and shouldn’t have been included.

Alright, no more spoilers from this point on!

The remainder of the film is a straight-up, faithful adaptation of the source material. If you’re reading this review, I’m going to bet you’ve read the graphic novel already – probably many times. Therefore, there’s not really much for me to analyze to be honest.

Yes, there are better animated Batman films than THE KILLING JOKE, no doubt about it. It’s not in the same league as, say, MASK OF THE PHANTASM, UNDER THE RED HOOD, or BATMAN BEYOND: RETURN OF THE JOKER. But just comparing apples to apples — in this case, straight-up adaptations — I’d rank THE KILLING JOKE behind both THE DARK KNIGHT RETURNS and YEAR ONE.  One final note…

I’d LOVE to see Warner Bros. release more of these animated Batman films into theaters for a limited run like they did here with THE KILLING JOKE. Based on the packed house I watched it with last night, I think they’d experience similar success with future animated Batman movies. – Bill “Jett” Ramey

THE LONG HALLOWEEN, PART 1: “The Triumvirate of Crimefighters & Their...