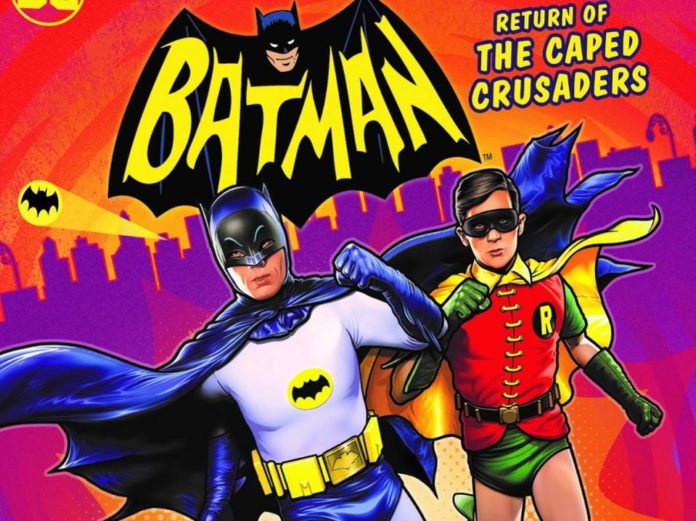 SYNOPSIS: Produced by Warner Bros. Animation and DC Entertainment, the film takes fans back to the 1960s as Batman and Robin spring into action when Gotham City is threatened by a quartet of Batman’s most fiendish foes – The Penguin, The Joker, The Riddler and Catwoman. The four Super-Villains have combined their wicked talents to hatch a plot so nefarious that the Dynamic Duo will need to go to outer space (and back) to foil their arch enemies and restore order in Gotham City. It’s a truly fantastic adventure that will pit good against evil, good against good, evil against evil … and feature two words that exponentially raise the stakes for both sides: Replicator Ray. Holy Multiplication Tables!

EDITOR’S NOTE: Warner Bros. Home Entertainment provided me with a free copy of the Blu-ray/DVD to review for BATMAN ON FILM. The opinions I share are my own. – “Jett”

As Batman and Robin are about to blast off into space (I’m not kidding), Robin tells Batman that he never thought they’d actually use the Bat-Rocket. “An intergalactic spaceship,” the Caped Cruder tells the Boy Wonder “is just another tool in a crime-fighters arsenal.”

This line tells you pretty much all you need to know about the latest animated Batman film, BATMAN: RETURN OF THE CAPED CRUSADERS.

Of course, BATMAN ‘66 has been riding a wave of nostalgia over the last few years ever since Warner Bros./DC Entertainment gained control over the TV series after making a deal with Fox (who originally owned the show). After the release of the TV series on Blu-ray and a plethora of BATMAN ‘66 merchandise, an animated film based on the series was a forgone conclusion.

Regarding ROTCC, I know I for one did a bit of the Batusi (metaphorically speaking, of course) when the film was announced. Though I missed the theatrical screening and didn’t have time to check it out when it was released digitally, I finally got to sit down and watch it via on Blu-ray via the screening copy I received from Warner Bros. Home Entertainment. So, since I was very excited to watch ROTCC, what did I think of it once I did?

Well, let me start by saying that I am a HUGE fan of – for lack of a better term – the “Adam West Batman.” Mr. West was my first Batman and the TV series is what introduced me to the character and made me a Batman fan. While there was a time I turned my back on it, I did eventually come to my senses and re-embrace BATMAN ‘66. Though it’s far from my preferred depiction of the character, it’s an important part of my personal Batman life and I’m happy got smart, if you will, several years ago and reconnected with the source of my Batman fandom. But again – I’m sure you’re asking – what did I think about this movie?

ROTCC is a faithful addition to the show’s mythos and history. Having Adam West, Burt Ward, and Julie Newmar return to voice Batman, Robin and Catwoman, respectively is certainly awesome and lends credibility to the project. Plus, it was awesome to see – or hear – them again, albeit in animated form.

The plot – though ridiculous (which it was meant to be) – is a lot of fun and tonally reeks of the TV series. In short, The Joker, The Penguin, The Riddler – and of course, Catwoman – form a supervillain super-team and plan to wreak havoc on Gotham City, and it’s up to the Dynamic Duo to take them down once again. To ensure that the villain’s nefarious plan isn’t thwarted by Batman, Catwoman slips him a mickey – or rather, scratches him a mickey – and turns our hero bad.

While it was fun to see West’s Batman being bad, this plot device was also used as a means to kinda-sorta criticize the “dark” incarnation of the character that Batman reverted back to after BATMAN was canceled in 1968. Make sure you watch for the nods to/jabs at BATMAN ’89, Frank Miller’s THE DARK KNIGHT RETURNS, and a not so subtle dis of THE DARK KNIGHT RISES. I guess one could its fair retribution in response to many people (including yours truly) who turned their back on the Adam West Batman and/or proclaimed it not to be a “real” or “legitimate” version of the character.

The only other quibbles I had with ROTCC is that it gets to be a bit much at times and slips into self-parody. There’s almost too many “Bat-this” and “Holy thats” that may induce an eye-roll or two while watching. Also, I found it a tad long – perhaps by 10 minutes or so. As a result, I got to a point in the third act where I was ready for it to end. Maybe a snip here and there would’ve prevented this.

But overall, ROTCC was a nostalgically awesome experience. Both the animation and voice-work was top-notch. I was worried that Adam West would sound too “old,” but it ended up being a non-issue. The dude sounds pretty good for being almost 90! In the case of Burt Ward, he sounds basically the same as he did on BATMAN 50 years ago! Julie Newmar sounded hot and did a wonderful job as Catwoman. As far as the rest of the cast, great job all-around. The folks who voiced The Joker, The Penguin and The Riddler (Jeff Bergman, William Salyers, and Wally Wingert, respectivey) did Cesar Romero, Burgess Meredith, and Frank Gorshin proud. And if I didn’t know better, I would’ve thought a 108 year old William Dozier was behind the mic as the announcer (again, Jeff Bergman)!
Minor issues and nitpicks aside, I enjoyed BATMAN: RETURN OF THE CAPED CRUSADERS quite a bit and I’m looking forward to more of this Batman on animated film. LIKE…

Review – BATMAN: PRELUDE TO A WEDDING: RED HOOD VS. ANARCHY