SYNOPSIS: “Doom Metal” part two of five storms the stage in this essential Dark Nights: Death Metal tie-in! It’s the Titans reunion you’ve been clamoring for when Starfire and Cyborg join Nightwing in this twisted Justice League. The team is hell-bent for Brimstone Bay to free the Legion of Doom, but what horrors and desires will the Valley of Starros reveal to them-and who or what is the villain named Mindhunter? 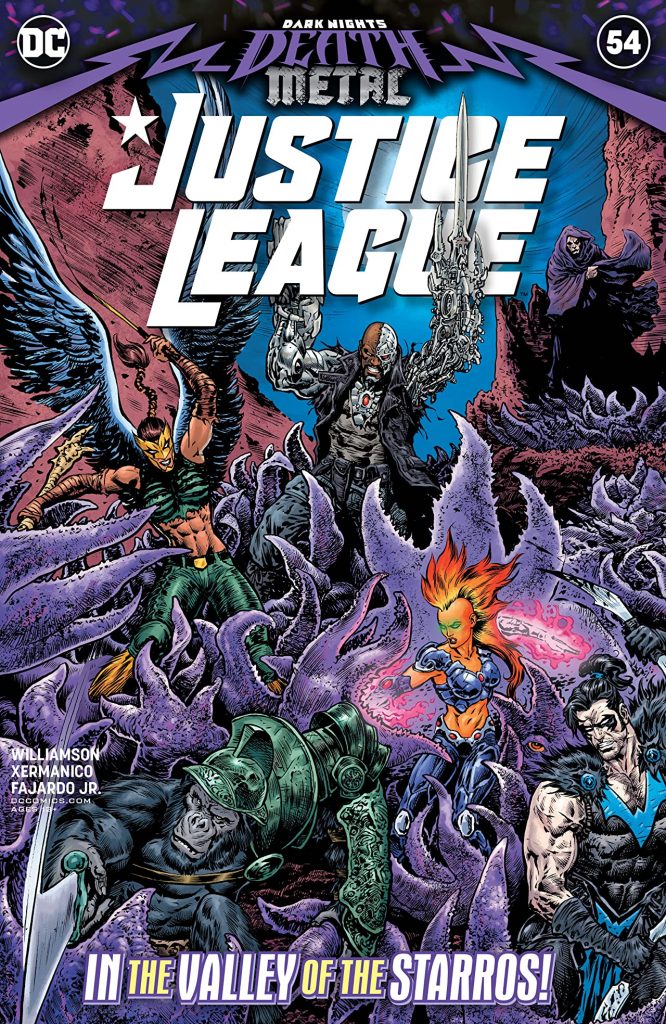 Justice League #54 serves as part 2 of writer Josh William’s “Doom Metal” storyline featuring a roster of heroes that has a bit more to do with Teen Titans than it does the traditional League.

Set in a post-apocalyptic wasteland designed by The Batman Who Laughs, Nightwing and company are met with none other than Lex Luthor and face down an entire valley of Starros! Meanwhile, Martian Manhunter faces the Mindhunter (a dark Batman/Martian mashup) in a confrontation of minds and control of communication.

Okay, so there is a lot going on in this book. Tie-in issues can be hit or miss for me, especially when the title isn’t able to use characters that are involved in the broader narrative. Let’s start with the positives.

Working with a team of JL B-teamers, Williams is able to not miss a beat when it comes to engaging the audience with who he has to work with. While there are heavy hitters from the Teen Titan ranks, it would be easy for the reader to miss the presence of the core League members. Utilizing Dick (Richard) Grayson as a fish out of water trying to determine real-life madness vs. false realities and faulty memories works really well as the main character in the story.

Lex’s presence in the story is solid as well. I tend to really enjoy the “Humbled Lex” that has come close to achieving his goal but fallen short and is desperate enough to work with his foes. His inclusion also allows this storyline to connect nicely to the Snyder/Tynion run on Justice League, serving as a way to remind the reader where things with the Legion of Doom and Perptua left off before the rotating creative teams took the book over.

I mentioned shifting realities earlier and the valley of Starros presents an opportunity for Williams to craft pages of different characters battling their internal demons via Starro visions confronting them with pivotal characters tempting them to lay their armor down. It’s a little reminiscent of the recent Black Mercy storyline from a couple of issues back, but it works well enough on its own and allows artist Xermanico to show off different character designs and panel layouts that serve as highlights for the visuals.

On to the aspects that didn’t work as well.

For so much going on in this issue, it didn’t really advance the story too much. Sure, it’s an interesting read on its own but the team’s mission feels a bit underdeveloped. The opening pages are fairly throw-away, with paper thing enemies featuring a corny background as Batman villain-themed science experiments.

While Xermanico’s panel design is solid throughout the book, his style, in general, is not my favorite. Character design shifts oddly in places it isn’t supposed to, making it difficult to decipher who is who in places. Overall, the art as a slightly unfinished and sketchy look with underdeveloped backgrounds. It isn’t bad, but it isn’t a home run either.

Overall, if you’re into Justice League meets Teen Titans, are enjoying Death Metal, and like Lex thrown into team dynamics, you’re going to enjoy this issue. There is enough good that the not-so-good won’t drag your enjoyment down. – Garret Grev