SYNOPSIS: It’s the landmark, oversize issue of Detective Comics #1050, and some of the biggest names in comics are here to celebrate the Dark Knight! First up in “The Tower” part four, the villainous force keeping Arkham Tower’s patients sedated is at last revealed-and this villain’s return is guaranteed to catch you by surprise! It’s the dramatic conclusion to act one of Mariko Tamaki’s Arkham Tower epic, brought to life by the legendary Ivan Reis! Then, in “House of Gotham” part four, Matthew Rosenberg and Fernando Blanco take us into the seedy underbelly of Gotham’s criminal elite through the lens of the original Robin (Dick Grayson), and reveal what it takes for a young man to survive amongst the deadliest killers in the DCU. It’s a tour de force of Gotham’s vilest villains! Last but not least, making his grand return to the DCU, writer Mark Waid teams with Detective Comics uber-artist Dan Mora to bring you the start of a brand-new day for Batman…and Superman? It’s the world’s finest collaboration that you’ll need to read to believe! 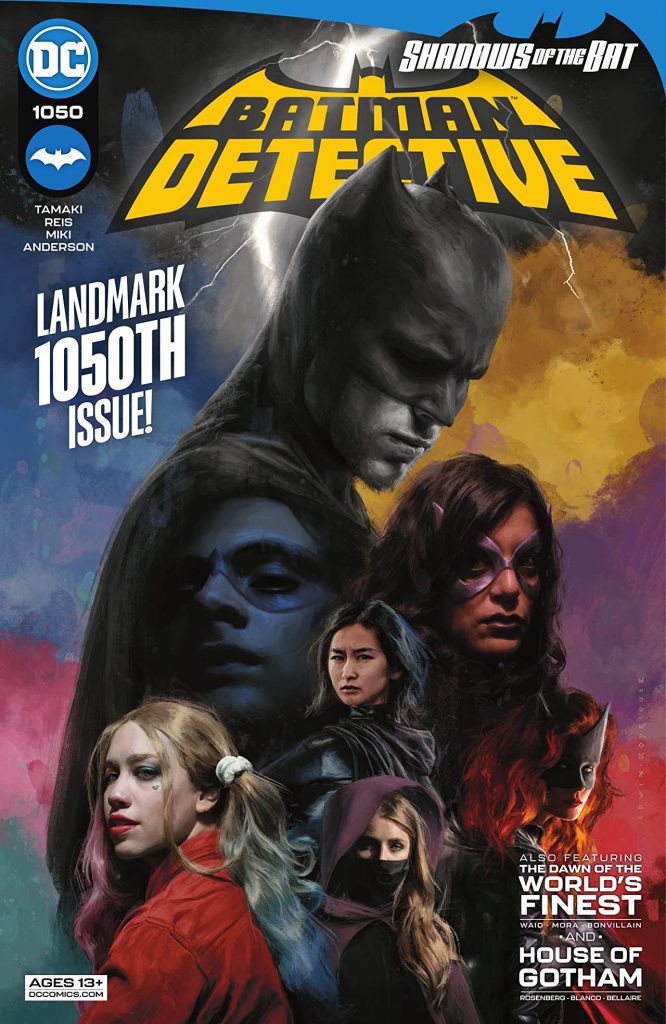 “Shadows of the Bat” is back with its latest chapter in Detective Comics #1050.  This twelve-issue weekly story has been a bit of a slow burn.  We know that Arkham Tower is the newest hot spot in town, and it has caught the eye of the Bat-family.  We know one of their own is inside, but details have been few and far between.  Is this the issue where Tamaki opens and lets the reader in on some of her secrets?  Let’s break it down!

If you read my reviews, you might have noticed that I was growing weary of the wait-and-see approach that Tamaki has provided just three issues in.  Well, I’m here to say that Tamaki has finally delivered.   She delivers some incredible reveals on the who, what and where.  While I think it has taken a bit too long to get here, I am more than impressed with what Tamaki has delivered in this book.

Shadow of the Bat part four is a unique book.  This book is a character study of the Huntress, past, and present.  Tamaki opens the book flashing back to arguably the most remarkable comic book to star, Huntress, Batman vol 1 #574.  This very well might be the defining moment in the character’s history.  Tamaki uses this moment and some beautiful exposition via Nightwing to show the reader what makes Huntress special.  Then Tamaki mixes in her piece of Huntress lore from Detective Comics vol 1 #1039 and Batman Secret Files: Huntress.  Tamaki does a great job blending nostalgia, legacy, and fresh ideas.  A trend that has become all the rage in Hollywood is now making its way to comic books.   Tamaki explains that Huntress was not kidnaped but went undercover at the request of the Bat-family.  This is a kill two birds’ scenario; Nightwing wants Huntress as their woman inside while she gets the mental health help she needs after being possessed by Vile.

The turn of events is fascinating, more interesting than a simple kidnapping or your standard undercover mission.  Nightwings motives seem very Batman.  Grayson is using Huntress’ mental health issues to his advantage.  There might be some hardcore fans who will say this is highly out of character for Grayson.  They might be right; one could argue with Batman out of town, Grayson is trying to overcompensate.  The Twitter debates might be worthwhile this week.

The theme of “Shadow of the Bat” part four is that everyone is at the top of their game.  In the past three issues, I have enjoyed Ivan Reis’s artwork but felt he wasn’t being used to his best abilities.  I thought Reis did an excellent job recreating scenes from No Man’s Land and Batman #574.  From the few panels he recreated, I knew the exact moment and issue they took place, a feat that cannot be disregarded because of how massive No Man’s Land is.  Most of the action scenes are flashbacks; it would be nice to see them extended just a bit, but I will take this as a “W” compared to what we have received in the last three issues.

The emotion that pours out of Huntress throughout the issue is phenomenal.  The anger, the rage, the pain, and the confusion are beautifully displayed and translated to the reader.   From arguing with Grayson to pummeling thugs, Ries does an A+ job on facial expression and sells every emotional note.  Not just Huntress but Grayson and Dr. Ware both have their fair show of scenes where you can see the tension and frustration on their faces.  Facial expression and body language are massive selling points for me when looking at artwork, and Reis did not disappoint.

Mathew Rosenberg’s House of Gotham also made significant progress on this issue.  Rosenberg sets up a wonder confrontation with Robin, Alfred, Scarecrow, and his crew.  Scarecrow and his “sidekicks” make a grand entrance at the doors of Wayne Manor.  We see some beautiful pixie boot Robin moments with all that makes Grayson great; the wisecracks and heroics are all on display.  Scarecrow has some exciting moments with our red-headed friend as he convinces the boy there is something special about him and how he is meant for great things.  It is unsettling to see Crane act as somewhat of a mentor to the boy, but Rosenberg pulls it off magnificently.  I can’t wait to see if this is a Trojan Horse act or what.  I’m all in on this backup tale!

Detective Comics #1050 is just what we all needed after three lackluster issues.   Shadows of the Bat seems to be finally coming together.  Tamaki delivers all the details that have been missing while providing some shocking reveals that none of us saw coming.  Reis draws heavy hearts and emotions that translate wonderfully through the page while perfectly paired with the script.  When DC announced this twelve-issue weekly event, this was precisely the type of book I thought we would get from this creative team.  Bring on part five!  The main story is hitting its stride, and the back story is getting more twisted.  Throw in all these sweet variant covers; it will be tough for you to justify not picking up Detective this week! – Peter Verra