SYNOPSIS: The Lazarus demon rises! The deadly end of the League of Lazarus is at hand! Countless fighters have fallen! And now, to save everyone on Lazarus Island, Damian must go one-on-one with a literal giant demon. Can Damian utilize everything he’s learned in the tournament, or will he die for the last time? 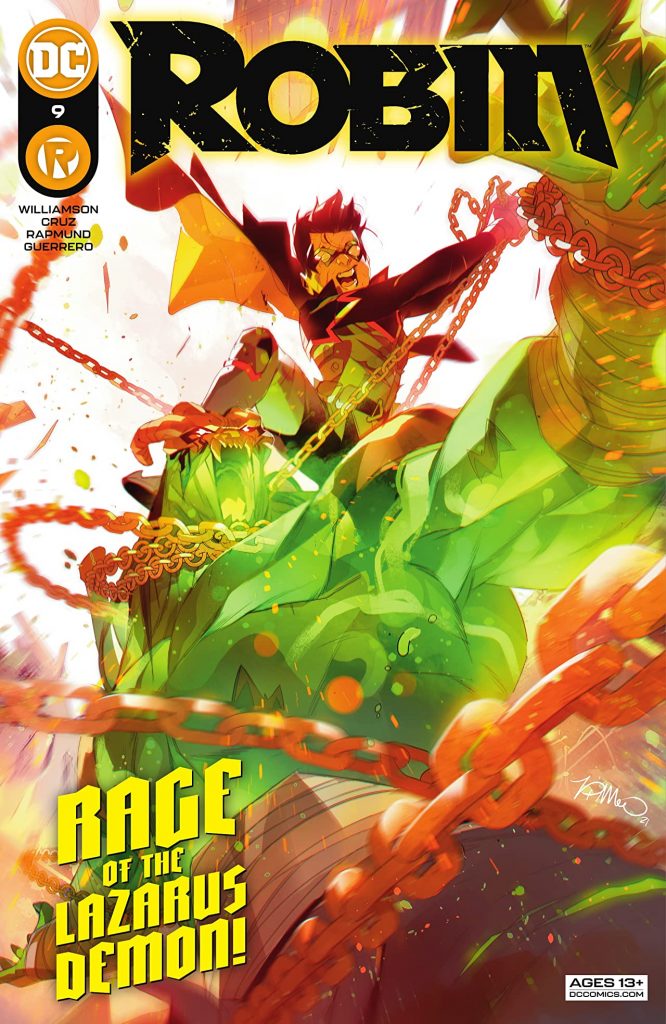 Joshua Williamson took a fun concept-Mortal Kombat Island crossed with the Lazarus Pit and made it a deeply personal journey for Damian Wayne. Now teamed with artist Roger Cruz and inker Norm Rapmund, the storyline is reaching its crescendo!

Damian has more than met his match against his Grandmother’s Lazarus Demon, a fact that becomes painfully clear to the young Robin, leading to the crux of the issue.

In a sequence reminiscent of Grant Morrison’s The Return of Bruce Wayne, young Master Damian gets counsel from the ghost of Alfred that has been by his side this entire adventure. Serving as the guardian angel on Damian’s shoulder, he walks the boy through the steps his father took to become The Batman, with Damian projecting himself into his father’s place.

It’s here that Alfred reminds him of “The First Truth of Batman”, which also happens to be the key to defeating the Lazarus Demon. The simple fact is, Bruce has always had help and by having Damian finally learn this lesson and understand it, Williamson continues the character progression begun by Morrison and continued by Tomasi. It feels very organic for Damian to be at this place given all that he’s lost recently and feels cathartic for him, maybe finally giving him a modicum of peace after all the guilt he’s been carrying since “City of Bane”.

Roger Cruz is a very capable replacement for regular artist Gleb Melnikov. While maybe not quite as unique when it comes to panel layouts, Cruz’s art fits in very well with the style already established, meaning those reading this in trade should not feel an abrupt visual shift when they get to this issue. Most importantly, he gets across how Damian is feeling this issue — from loss, to shock, to defiant leadership, you know what Robin is going through.

Luis Guerrero’s colors are critical to this issue, be it the shade of Lazarus Green or trying to mimic the look of Batman: Year One. If it didn’t feel and look right, this issue wouldn’t be as impactful and I’m happy to say Guerrero nails the different environments and separates all the different characters in group and action scenes.

Just as Damian gets to a good place, Williamson pulls the rug out from under us, closing on a cliffhanger I did not see coming. I know he’s got some big plans for this title and Batman in 2022 and now more than ever am I looking forward to them!

Robin continues to be a title that surprisingly keeps pulling on my heartstrings when I don’t expect it to. What could have been another issue of all-out mega brawling instead serves up another defining moment in Damian’s life and the character is all the better for it! I know Damian is far from the most popular Robin amongst fans, but it seems Williamson is making him a worthy challenger to the title! – Javier E. Trujillo