SYNOPSIS: “Fear State” aftermath! Bloody, broken, and beaten…Batman had a mission after The Joker War. He would no longer look over Gotham City from Wayne Manor; he would move to the heart of the city, get closer to its people and its problems. The fight he pursued would be different, but after Fear State he finds himself disillusioned. He is no longer the protector the city needs, and definitely not the one it deserves. Batman’s last night in Gotham City before his international sojourn is here. Backup: Harley Quinn guest-stars in the culmination of “Foundations”! Must Gotham City have an Arkham facility, and if so…will it be any different, or is doom on its way? 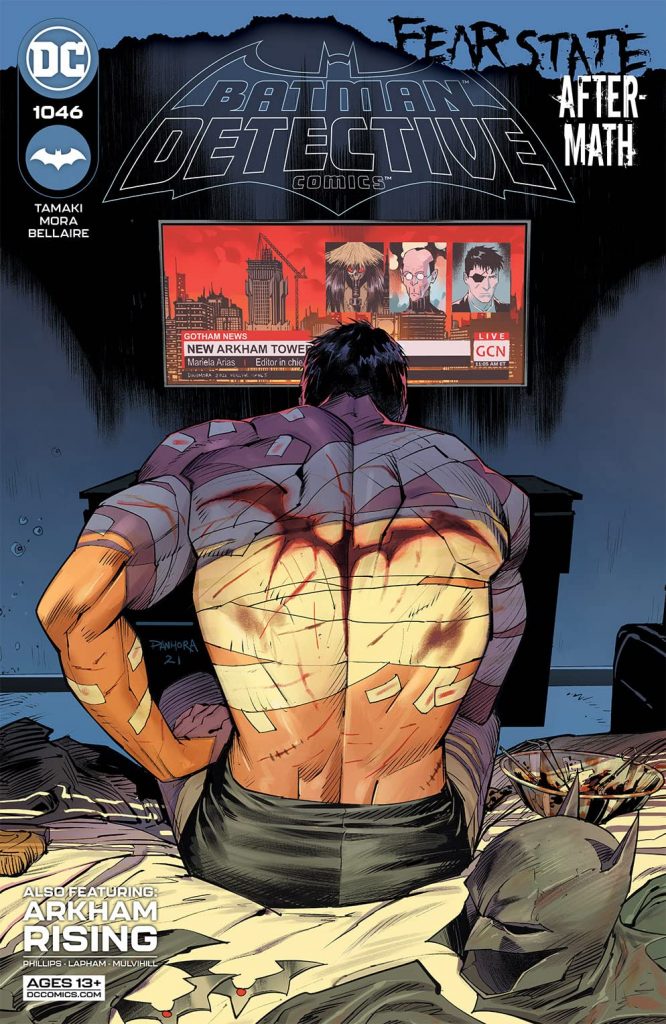 Detective Comics post-FEAR STATE was hopefully going to be Tamaki’s chance to take The Dark Knight down her journey for him.  After reading this issue, I question if this will continue to be an actual Batman title.  Let break it down!  Tamaki and Mora return for an issue that seems more set up than anything else.

#1046 is an issue unlike another written by Tamaki.   While the Batman moments are intense, they are few and minimal.  As noted by Spoiler, Batman seems to be going through one of his brooding phases post-FEAR STATE.  While Williamson has taken Batman out of Gotham in Batman, you had every right to question how that would impact Detective.  It seems to me DC is becoming a Huntress title until further notice.

Now me, I don’t mind it.  I like what Tamaki has been doing with the character in her few appearances.  I hope we get to follow Batman on his adventures after this issue.  That is the beauty of this book.  I left thinking, “Wow, what a cliffhanger.  Is this the end of Batman in Detective for a while?”  Someone might read this differently.  I enjoy the set and the various members of the Bat-family involved.  Huntress, Deb Donovan, Spoiler, and Babs.  Hell, we finally got Dr. Chase Meridian in a comic.  I’m sure there will be others as well.  This tale might not be for everyone.  If you dislike an extended Bat-Family, you might want to read elsewhere.

Mora’s artwork is less controversial but just as extraordinary as ever.  There is not one panel off the mark from his splash page explosions to his grizzled miserable Batman.  The book is hefty on the action and allows Mora to flex his muscles and draw great scenes.  Those who love Bats in the snow will have tons and tons of excellent panels featuring Batwoman and Huntress.  The Spoiler parking lot was my favorite part of the book, but you have many to choose from here.  Mora’s art in this book might be his best display on Detective yet. This issue will have tons of flip value; visually, it’s one of the best books you can buy this week.

Detective #1046 is not the book I thought I was going to read.   I finished thinking of endless possibilities for where this could take the title.  We have been on such an epic run as of late with Detective.  Since I have been reviewing the book for BOF, it’s been hands down the most consistent book of all the Batman titles.  This may be a transition period in Detective, but let us see what happens in #1047 before we jump to any conclusions, anyway #TeamYewllowOval? – Peter Verra