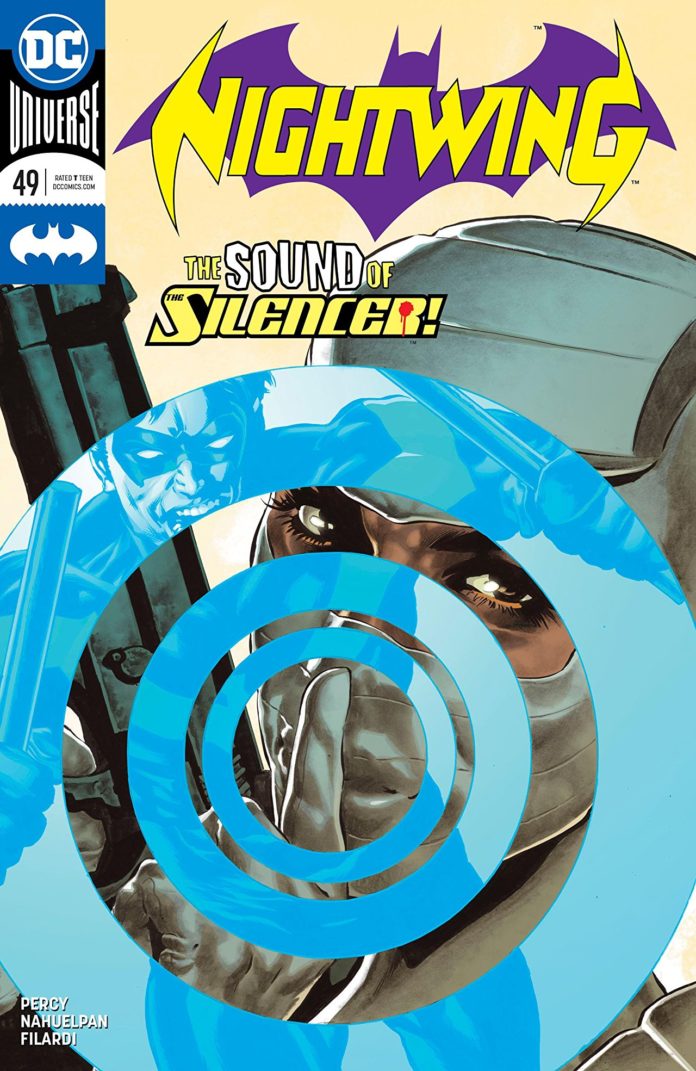 SYNOPSIS: What happens when the race is no longer against each other, but against Leviathan itself? As the head of the snake reappears, and as our heroes are allied against a common enemy, the bike race changes gears and the prize comes into focus—a chance for the winner to sit in the Mobius chair and ask one question.

When we last left our hero he was locked in a cosmic motorcycle race against the Silencer and others to reach the unlimited knowledge of the Pathway Altar.

Lives are on the line as Nightwing has to win in order to save friends who are held hostage by the Dark Web. He quickly forms an alliance with Silencer and, though they both have noble goals, have a few disagreements when it comes to killing. You know, the usual great divide among comic book characters.

Silencer demonstrating her tech to Nightwing also sets-up up a nice, friendly jab he directs at Damian Wayne’s Robin. It’s always pleasing to see the first Robin take a moment to taunt his successor from afar.

“Harm’s Way” part two is the first issue since writer Benjamin Percy announced via Twitter that he will be leaving the series saying, “I really wish I could have told the story I planned to tell…but I promise I’m leaving on a high note.”

Percy’s final run kicks off with the “Knight Terrors” storyline in Nightwing #50. Scott Lobdell is credited as the writer of Nightwing starting with #54.

I’m not going to speculate as to why Percy is leaving since I have a day job. Regardless, I do wish there was at least one more issue centered on this race.

I mean, come on, Nightwing gets to ride a Tron-esque light cycle!

Since we don’t see too many competitors (aside from Professor Pyg and Flamingo, who are wonderful in their typical creepy way) and obstacles the whole story feels like it was scaled back a bit.

The opening of Nightwing #48 saw people filling the streets and bars of the isle in preparation for the race. Compared to that the competition itself feels sparsely populated.

The start of the race had a moment where competitors were asked what they were racing for. There were sad cases like the guy on a moped who wanted to know who killed his wife and funny ones like a racer who wanted to find El Dorado. There were plenty of side stories that could have been told here.

And for all the talk about roads stretching beyond the isle to different planes of existence we never really see that as a threat, just a pit-stop for a quick conversation.

I hate to write that since the concept and visuals are thrilling, but man does it leave you wanting more.

Shout out to Mike Perkins and Dave McCaig who are credited with the issue cover, which to me looks very Hitchcock. – James Armstrong