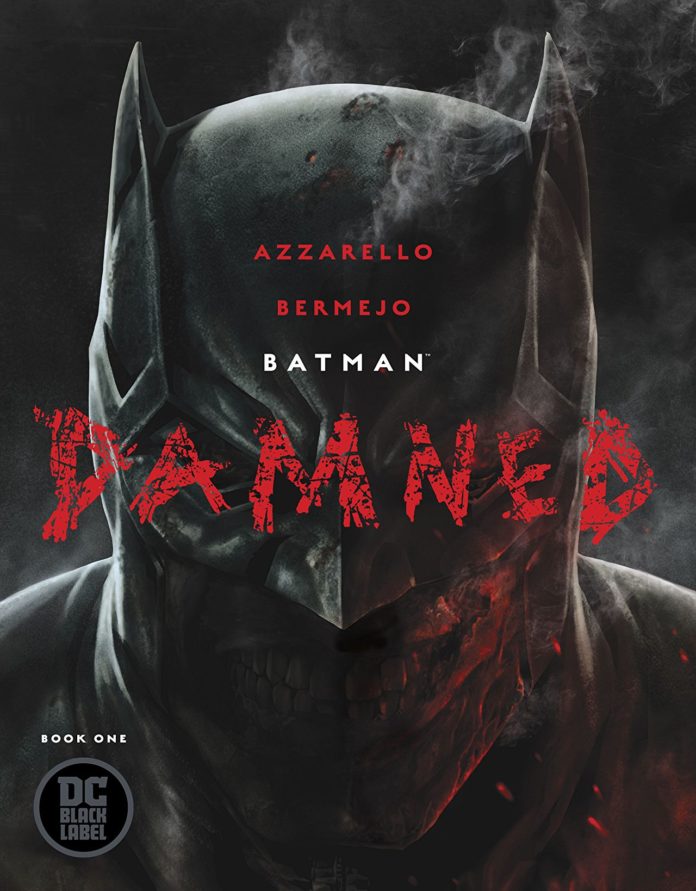 SYNOPSIS: The Joker is dead.

There is no doubt about that. But whether Batman finally snapped his scrawny neck or some other sinister force in Gotham City did the deed is still a mystery.Problem is, Batman can’t remember…and the more he digs into this labyrinthian case, the more his mind starts to doubt everything he’s uncovering.

So who better to set him straight than…John Constantine? Problem with that is as much as John loves a good mystery, he loves messing with people’s heads even more. So with John’s “help,” the pair will delve into the sordid underbelly of Gotham as they race toward the mind-blowing truth of who murdered The Joker.

When Brian Azzarello and Lee Bermejo team up, it’s something special. And for them to be the duo that kicks off this mature, standalone DC line, it’s saying something.

BATMAN: DAMNED#1 is a 3-issue, bi-monthly story that doesn’t just introduce us to this new label, but beats it into our brain that this something new.

The book opens with The Dark Knight lying in an ambulance, and in bad shape. We come to find out this tale picks up moments after the team’s Joker, and the Clown Prince is dead. Supposedly. According to the Batcomputer, one John Doe is in Gotham’s morgue (presumably Johnny Frost) and another is M.I.A. (Joker). During this discovery, Batman is saved by John Constantine, who is guiding us through the story. Along the way, we meet this universe’s version of Deadman, Zatanna and Enchantress. They’re raw, dirty and creepy, which fits for this team. By issue’s end, we’re led to believe there’s a conspiracy against our hero, and The Joker is involved.

If you don’t “get it,” it’s all right. Many lines/events here are meant to seem a little “out there” and ambiguous, but there’s two more books coming down the road. This was a great introduction that set the stage for a trip to the dark side. Azzarello is no stranger to complex and controversial writing. It’s not surprising DC went to him for the Black Label kickoff, as he likes to push the boundaries in his work.

It also makes more sense that Lee Bermejo is the one in charge of the look. I LOVE this guy’s work, and Batman: Noel is one of my favorite Batman books. But he has outdone himself here. I never thought Bermejo could get better, and yet he does. His Gotham is dirty, but beautiful. His characters are eccentric, yet realistic. He balances light and dark to perfection, and gives excruciating detail to the most minimal of items. There are a few panels in this book (Batman jumping into a cityscape) that had me forget reading, and just absorb the panels. This book is gorgeous.

Don’t worry, I didn’t forget about the….ummm….batpole. I don’t know who was behind it, but it seemed like a “let’s do it because we can” decision. Sure, we get some F-bombs and other language throughout that is more blunt than this batawang. But it’s not subtle enough, considering DC’s digital version covers it up. If you’re still not sure what I’m talking about, give BATMAN: DAMNED a Google (just not at work). The inclusion here is more of a “whatever” to me, but as seen online today this book is getting attention for THAT instead of being the kick-ass story that it is.

DC has outdone themselves with their first BLACK LABEL book. BATMAN: DAMNED is mystic, brooding, confusing and gorgeous. It’s the best work of the year, behind Sean Murphy’s incredible WHITE KNIGHT. The book is only $3.00 more than the usual comic ($6.99), but it’s an over-sized treasure that’s worth every penny. – Ryan Lower

BATMAN AND THE OUTSIDERS #7 by E. Chad Metz