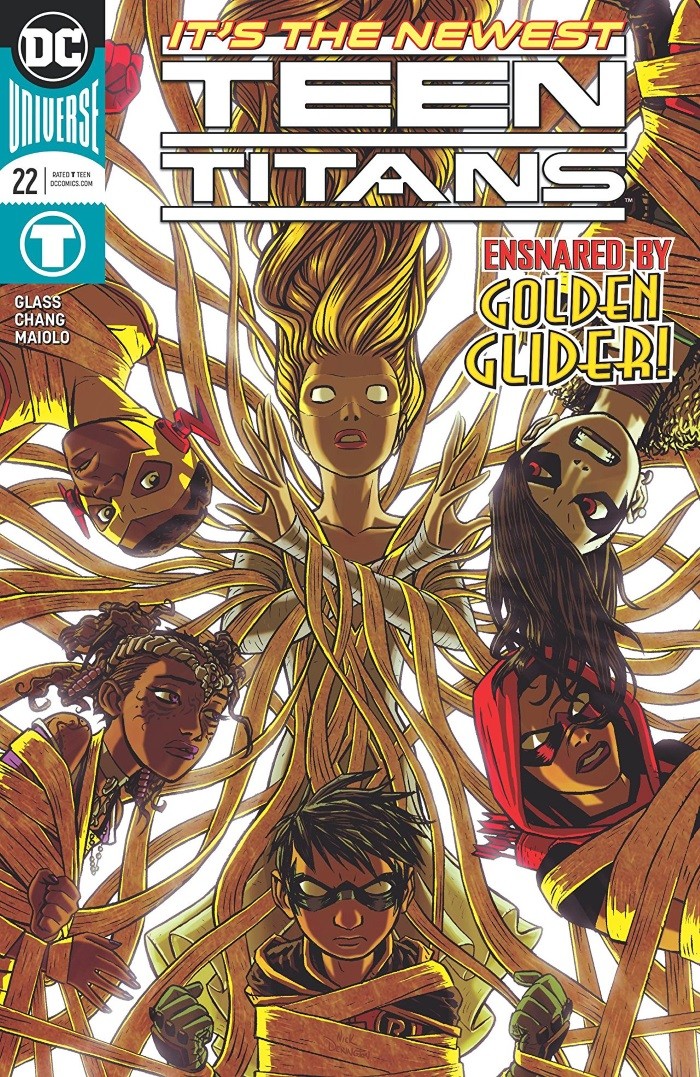 SYNOPSIS: The team’s dealing with an unexpected loss, but there’s little time to grieve. They must travel to Keystone City, where Golden Glider and Swerve plan to pull a heist at a children’s hospital. (That’s a new low, even for some Rogues!) There’s also plenty of drama to go around, as Kid Flash mulls quitting after his clash with Red Arrow, and Damian’s harboring a new, secret mentor, all while his secret prison’s about to blow up in his face.

In Fantasy Football there is this thing that good players have to keep in mind with rookie players, even those with great pedigrees and impressive stats coming out of college (stay with me here, please.) A lot of times, these newly minted professional athletes take a little bit to find their footing and to make a relevant impact to their actual NFL teams and their fantasy football owners roster. Good fantasy players watch their development, and allow for time for that development to take place, before deciding to put them in the starting line up or cut them from their team. You have to stay patient, even if it seems like they may just outright stink.

That’s where I am with this run on Teen Titans.

The story opens with the team on a night mission seemingly on the verge of failure. Our heroes stand behind a villain we come to know as Swerve holding a nurse at gun point at the the ledge of a building. Swerve is declaring that she can’t go back to jail and that she had no choice in the attempted robbery of the hospital.

Wally West (Kid Flash) serves as the issues narrator and he brings the reader back to the beginning of the day. The team is eating breakfast together and discussing the death of Roundhouse in issue #21. Wally is grieving and blames himself for bringing Roundhouse into the team before he was ready, while Crush apathetically tells him that it’s time to move on. On the verge of an altercation between the two, Red Arrow intervenes and says the loss of a teammate was the byproduct of the group not being prepared and needing additional training.

The team (minus Robin) moves on to do just that. The training session in question involves Red Arrow taking on the remaining Teen Titans, defeating them all one by one while lecturing them on their weaknesses and attacking her as individuals instead of a team. The lesson is that they desperately need to start acting as one and complimenting each other’s skills and abilities.

We move to Robin, in his absence from the training session, holding Black Mask prisoner in a dungeon deep below Mercy Hall. He’s looking for information on the mysterious The Other, and using his knowledge of Black Mask’s son as leverage to get the information he’s looking for. While Black Mask is aware of The Other, a mysterious and powerful figure working to organize all criminal threats, he tells Robin that he’s only heard the same legends and rumors that Damian has, doubting their validity. Instead, he offers up intel on a job set to go down later that evening.

This brings us to the beginning of the mission the issue opened with. The team is onsite at the hospital, awaiting the aforementioned robbery from Black Mask at a local hospital. While holding their positions, we get a nice couple pages of character interactions between Robin and Djinn, and Crush and Red Arrow. Despite all the “teamwork” emphasis , When danger presents itself Kid Flash decides to act on his own and not follow the plan, nearly costing him his life.

The thing that is frustrating about this run so far is the emphasizes that writer Adam Glass puts on the team not being a real team yet. They (still) don’t know how to work together, their interpersonal dynamics are either strained or at the precipice of forming, and their missions are badly botched. While this could be engaging set up for the stories to yet to be told, at this point it’s just a bit belabored and redundant. I understood it in the first issue, I got that Glass wanted to build on it in the second issue, I was ready to move on from it in the third issue, and its just plain annoying in the fourth issue of this run. While the scene between Robin and Djinn informs the reader of both some of the characters backstory and qualities, along with just a touch of romantic tension, far too much of the story find the characters written in overly broad strokes: Red Arrow is a disciplined bad-ass who always has a plan, Crush is emotionally distant and uses her strength as her only power and defense, Kid Flash is cocky and impulsive.

The sequence actually works decently is the rescue of the nurse from the hands (and gun) of Swerve. We get some of Swerve’s character history and finally see the team use their abilities together to keep the nurse from plunging to the street and her death. Hopefully this is finally a sign that Glass is ready to move the story (and team) forward a bit and bring some cohesion to the group dynamic that allows us to move on from the awkward upstart phase.

The story has two separate wrap up segments that are both enjoyable as well. The first finds Robin meeting with Red Hood discussing the team and their surprise next target in Damian war against The Other. The second brings us back to Wally as he races to the home of Roundhouse’s parents to finally inform them of their son’s death, a duty he’s been putting off for some time. Wally knocks on the door only to be greeted by a “surprise” character in a moment that I’ll wait until next issue to judge whether or not it actually paid off.

The artwork on the book is high quality. Artist Bernhard Chang’s dynamic style fits the team well and has a quick pace that moves the story along, even when the plot itself seems to spin its wheels. His panel work in particular is strong, telling the story in fractured, angular frames as the teams mission is seemingly falling apart. There is a vibrant quality to his use of lighting sources that plays equally well in high visibility scenes such as the hospital attack as it does in the shadowy Red Hook Docks at nighttime. For Chang’s sake, I hope the writing improves or he gets put on a better book where his talents can shine.

Overall, there this issue barely has enough going for it to be a recommended issue and to keep me hanging on to see where this creative team is bringing this title. I’m hoping to see the team come together more in issue #23. Here’s hoping that Teen Titans finds strong footing and can become a break out star, instead of a player that never capitalizes on its potential to make the starting line-up. – Garret Grev