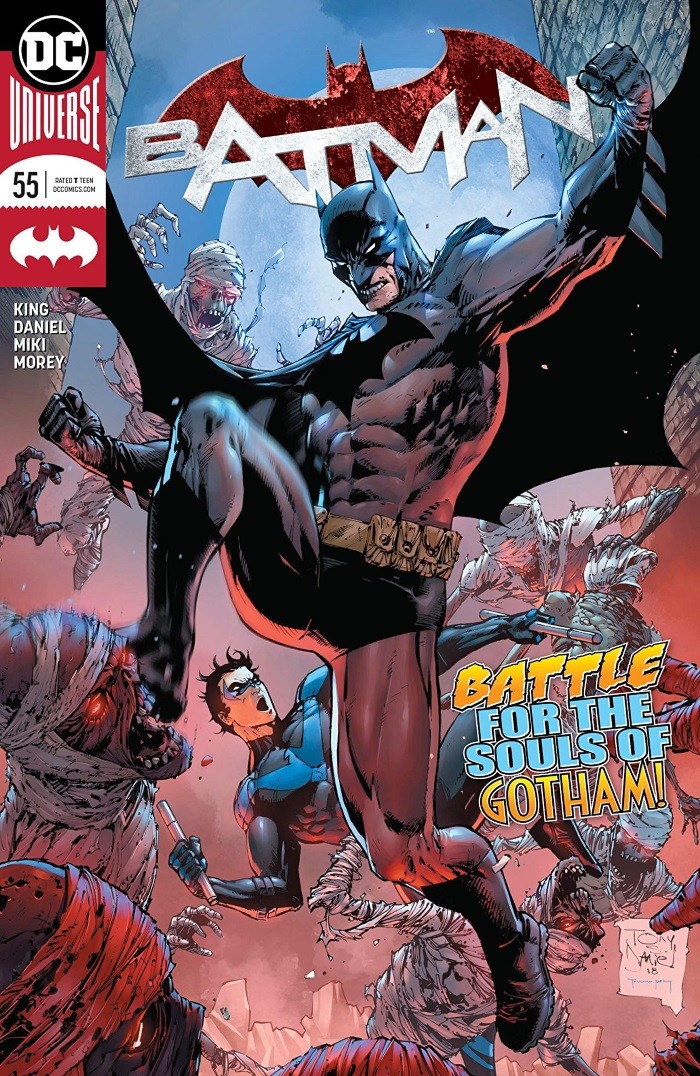 SYNOPSIS: The KGBeast lives! The Russian super-assassin is back—but under whose orders? Does he have a specific mission, or is this simply some leftover Cold War mayhem? Nyet, comrade—it has to do with Bruce Wayne’s recent court case involving Mr. Freeze. Something is rotten in Gotham, and you can still smell it, even if it’s on ice!

“How long are you staying in Gotham?” asked Bruce Wayne of his first son and soldier, Dick Grayson, in BATMAN #54.

You’ll have to read it yourself to fill in the blanks…and believe me, you’ll want to read it!

“Beast of Burden” begins with Anatoli Knyazev securing a Gotham City stamp on his Visitor Visa; we know him as the KGBeast, but his pirated passport proclaims him as “Mr. Zimmerman.” Knyazev checks into a hotel, does something illegal, and chomps on a sloppy hot dog at a Gotham greasy spoon while Batman and Nightwing melee with mummies mustered by new nemesis “Phantom Pharaoh.” (Think King Tut from the ’60s television series meets Mumm-Ra from THUNDERCATS.)

When Dick’s pun-packed efforts to trick brooding Bruce into smiling go awry, he challenges his morose mentor to a physical feat under the thinly veiled guise of a training exercise. That Bruce goes along with it at all is testament to Dick’s ability to bring out a little levity in even The Batman, but soon The Dynamic Duo have bigger fish to fry, and then a thing happens.

It’s the kind of thing that’s big, but also isn’t, as we all know there’s no way it sticks, and not even for a little bit. But it’s one hell of a hook into the next issue, and I’m eager to see how it fits into the bigger puzzle of Bane’s sinister scheme to break Batman yet again — a plan that began with nipping Bruce’s nuptials with Selina Kyle in the bud and continued with the framing of Mr. Freeze for three murders in “Cold Days.”

After delivering some of the finest art of his career in this book’s recent Booster Gold arc (see “The Gift” in issues #45-47), Tony Daniel returns with co-inker Danny Miki and colorist Tomeu Morey for another great looking issue. Faces evoke emotion and character (particularly among the seedy characters Knyazev interacts with); action is big, energetic, and easy to follow as Batman and Nightwing maneuver above and among the cityscapes they know by heart. Morey’s colors add varied moods and appropriate atmospheres to the story’s many locations; I especially enjoyed the panel where the smoke from Gordon’s pipe oozes into the hazy rain, which in turn fades into the yellow blaze of the Batsignal.

I still wonder how much different this book would be right now had he committed to the Bat/Cat marriage, but King remains the king of keeping us coming back. – John Bierly