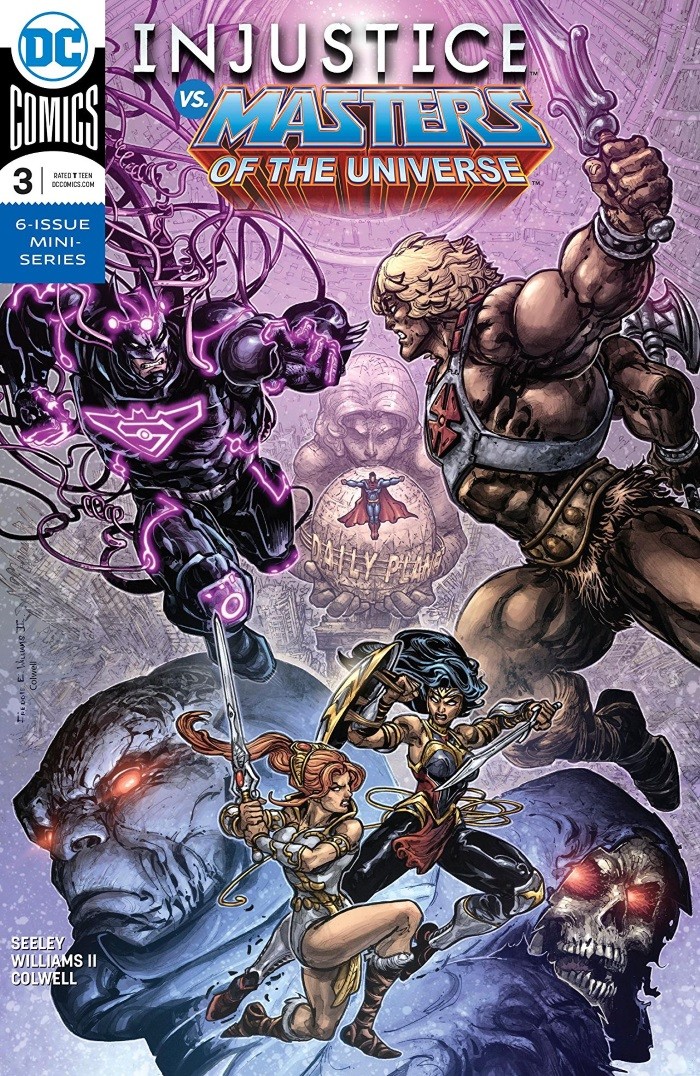 SYNOPSIS: Batman recruited He-Man to join the battle against Superman’s dictatorship, so why is Prince Adam battling him in the Oracle’s lair? Has Skeletor’s influence helped Superman breach new territory? Things seem dire on Earth, but Eternia is also facing a major threat—from Darkseid!

Well, I have good news and I have bad news.

The Bad News: I think I let my love of these characters run away with me in my reviews of Injustice vs. Masters of the Universe issues #1 and #2. I gave them both high marks, probably too high. I’m sorry for that. It’s tough to be unbiased when you’re reading a comic book that reminds you (kind of) of every battle you had between your Kenner Super Powers and Mattel MOTU figures as a kid.

The Good News: I am realizing this because of how incredibly exciting, fun, action packed, dramatic, and overall well done issue #3 is!

Injustice Vs. Masters of the Universe #3 gets everything it needs to get right, and it does it from the very first panel. For the first time in the series writer Tim Seeley gives the reader a look into the mind and motivations of the tyrant Superman and his lieutenant Wonder Woman. Superman is exhausted and sleep deprived, even though his body doesn’t require it. He and Wonder Woman discuss the challenge of trying to bring a world of peace to a population that is resisting his will to provide it to them through the force of his will. It isn’t just the reader that gets a better insight to Superman’s inner struggles and motivations, Skeletor makes an astute observation when asked by Wonder Woman why he thinks the Man of Steel still keeps him around; Superman wants to believe that someone he’s saved would be grateful and devoted to him in return, something almost no one else on Earth is feeling in this universe.

After recapping the Resistance force’s plan to take out Superman and his forces using Kryptech armor commandeered in issue #2, He-Man and the new Batman have a heart to heart. In the conversation we find out the true identity of this Batman, and as foreshadowed in the previous issue, it is indeed a former Robin, Damian Wayne. The balance between Damian and Prince Adam is handled nicely, drawing comparisons between two characters from “royal” families forced to take on responsibilities that were beyond their years.

On Eternia, Man-At-Arms and Cyborg make a visit to the Sorceress, who grants them the use of The Talon Fighter and Point Dread to use in their battle with the invading forces of Darkseid. Seeley really shines in finding ways to incorporate favorite elements of the Masters of the Universe world into his story in a way that provides the rush of pure fan-service in a way that ties the universes together and function with the plot at hand. Here, Cyborg is uniquely suited to pilot the Talon Fighter (an ancient, powerful, and hard to control machine) due to his ability to interface with its computer system. It comes not a moment too soon, as Darkseid attacks with the full force of his army along with the warriors of Avion, who have been turned into Parademons.

On Earth, Damian-Bats, He-Man, and a much more effective than normal Orko get to work on their attack of Superman’s base, battling magic sensing worm-monsters and a troop of DC villains under the control of Superman’s Kryptech armor. It is really fun to see Orko played against type as his magic seems stronger and more controllable on Earth. In fact, it is Orko who has a key role in the rescue of Bruce Wayne’s Batman from the mind control device in which he’s been in-prisoned. Damian and Bruce have an emotional reunion — for a couple of Waynes — while He-Man discovers Skeletor’s involvement. This happens just in time for Superman to return, ending the issue with a vibrant splash page displaying the violent energy of his heat beams as they engulf He-Man.

The writing in this issue is really something special. I mentioned Seely’s artful hand at providing fun call backs to the classic MOTU toys and cartoons before, and they are highly effective here. From Prince Adam reciting the classic monologue from the TV shows opening seen to an appearance of the classic variant figure Battle Armor, his choices land and never come off as forced or a detriment to the story.

I can’t say enough good things about artist Freddie Williams II’s work on this series. His rounded edges, magnified proportions, and detailed environments are perfectly suited to a storyline that finds its routes in cartoons and video games. The real treat here is the in the coloring and shading. Williams and colorist Jeremy Colwell have produced a unique visual approach that almost has a sidewalk chalk masterpiece feel to it. It’s soft but rich while never losing any edge despite a blending of texture not often seen in comic book art.

This is the issue that the creative team has really hit its stride. The book completely fulfills the potential that was just breaking through in the first two issues of this six issue mini-series. I will be counting the days until issue #4 goes on sale.