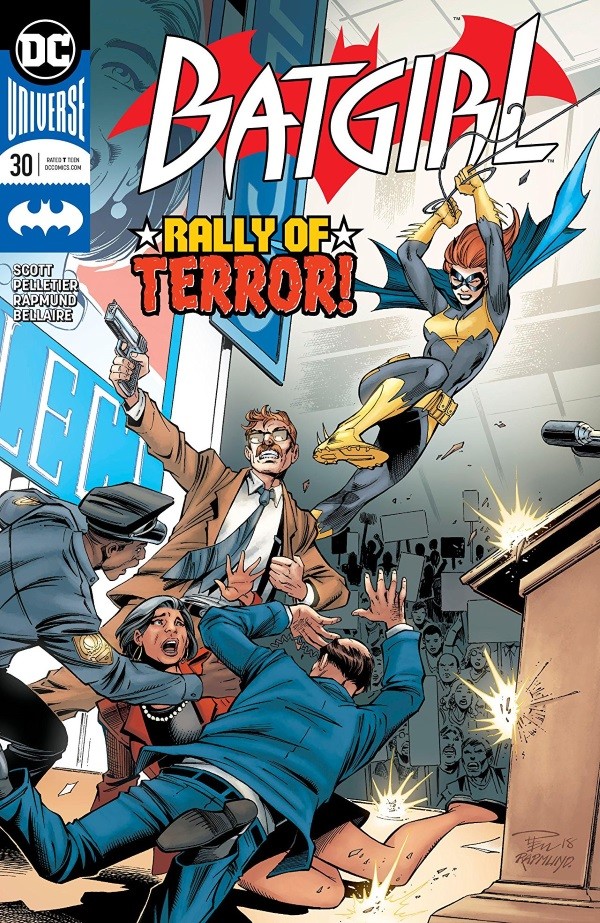 SYNOPSIS: You can take the Batgirl out of Gotham City, but you can’t take Gotham out of the Batgirl! Politics gets personal as the race for Congress in Gotham City heats up, leading to civil unrest in Barbara’s new neighborhood—as a new villain begins to make themselves known!

For the main cover, Paul Pelletier, Norm Rapmund and Jordie Bellaire go for an action scene which looks like it could just be an interior page. The posing is interesting, as it appears Batgirl is swooping down to kick her Dad in the head. Joshua Middleton delivers another very nice, very lifelike variant cover, although it really makes me aware of how little that face mask covers. Yeah, I know I gotta suspend disbelief and all that, but even more than Robin’s traditional domino mask, I can’t imagine anyone familiar with Barbara Gordon wouldn’t immediately recognize her in that Batgirl mask. Babs is still wearing her revised Year One costume with that mysterious yellow backpack (what is in there!?).

The issue starts with Batgirl psyching herself up to leap off a Gotham rooftop. It’s kind of cool to get inside her head and see that, although this is standard Bat-person routine and she’s done it a million times, it’s still jumping off a freaking building. We then go street-level to a political rally for a congressional candidate, and a group of thugs employed by her opponent and determined to make trouble. They do, Batgirl intervenes, and she reveals one of the instigators to be a bad dude she’s dealt with before. This action takes up the first twelve of the issue’s twenty pages, but it feels like most of the story takes place afterward and out of costume. I guess this is because the action in the early pages just moves faster than the later scenes.

In what’s becoming a staple of Mairghread Scott’s writing on this series, there’s another big argument between papa and daughter Gordon. This time the issue is that Barbara wants to volunteer for the congressional candidate who is building her campaign around calling out corruption in the GCPD and the failures of its leader, Commissioner James Gordon. Pretty understandable why ol’ Jim would have a problem with this. I’d guess this conflict will form the B-story of this arc, aside from the main Batgirl/villain battles. After this, Barbara visits the campaign HQ for candidate Luciana Alejo, meets a purple-haired girl named Izzy (probably gonna be an important character later on), and finds Alejo meeting with Jason Bard, the scumbucket from the beginning of the issue and a previous storyline. The issue ends by teasing us with an assassin named after an aquatic bird.

I wish I could say this issue gets me excited for the upcoming arc, but it doesn’t really. The story doesn’t seem to be doing much with Batgirl that couldn’t be done with Nightwing, and most importantly, the artwork just doesn’t do much for me. The political involvement storyline could yield some good results. I can envision some interesting contrast developing between Barbara Gordon the activist and Batgirl the vigilante.

Until next month! – Rob Veatch III

REIGN OF THE SUPERMAN Review by Ryan Lower