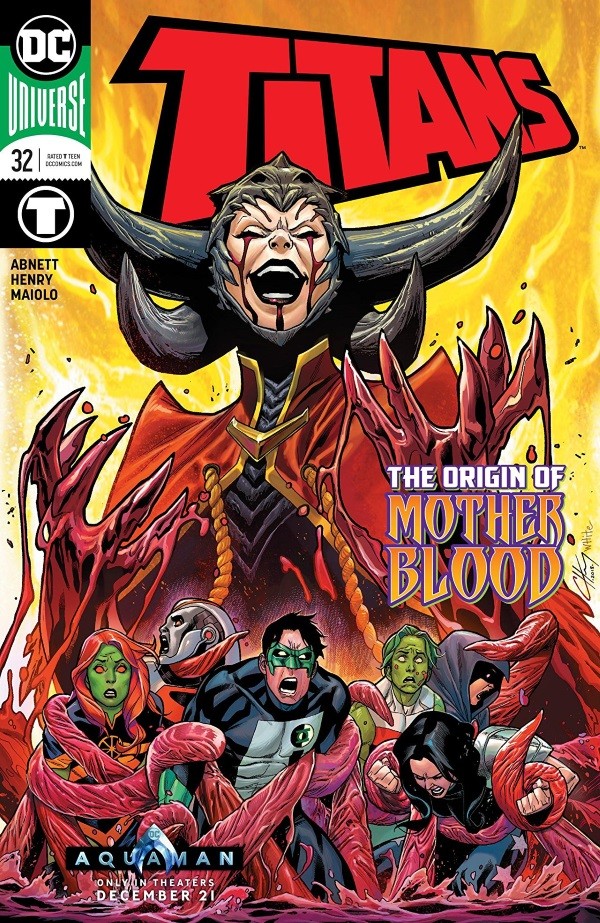 SYNOPSIS: While the Titans have spent months responding to Source Wall-related threats, Mother Blood and the Blood Cult have been studying that energy and learning to harness it for their own malevolent purposes. In this special villain-focused issue, discover what the Cult has been up to and why everything the Titans have done up to this point may have been for naught, and how they just might be playing into the ultimate trap!

Since we started reviewing Titans, the book has only been consistent in its inconsistency. I have tried to be as balanced, yet hopeful, when talking about the series. If you’re reading this, you probably love these characters as I do, and this is only place to find this cast. It is always disappointing when you see potential, but it is only realized in fits and parts. All of that to say, the latest issue of Titans does not inspire confidence. It feels like potential being wasted.

This issue is light on our heroes, it is all about the origin of Mother Blood. Mother Blood was introduced earlier in the run as the new leader of the Blood Cult. The Cult appeared to be a long-term threat to the new Titans, and that has turned out to be true. Mother Blood possess Beast Boy to tell the Titans all her plans, so they will find a way back to Unearth. She plans to access all emergent energy for the once imaginary planet. In her information dump, she reveals how she came to be, which is from the same emergent energy the Titans have been working to get a hold of.

I will be honest, I didn’t like any part of Mother Blood in this issue. Everything just seemed contrite. Mother Blood was a more intriguing character when it seemed like she was just the new figurehead of the Cult. Instead, we get a character granted powers through emergent energy and wants to control it all. Her plot does tie the ongoing threads of the series together: the team’s emergent energy goals, the Cult schemes, Unearth. All those things could, and should, come together for the Titans to deal with, but this feels unearned.

To add to the frustrations, the pre-energy backstory of Mother Blood was intriguing. They invoke feelings of real life; she is an immigrant and treated with hostility when coming to America. In that position, she is easy prey to the Cult, who is recruiting vulnerable people (as real cults do). She’s a scientist, she sees through the nonsense of the Cult. It would have been great to see her take a different route into becoming Mother Blood instead of becoming corrupt with magical powers.

On the bright side, I don’t have to complain about Beast Boy’s design for a week.

Can’t give a recommendation this week. Hopefully, it turns out better in the end. – E. Chad Metz