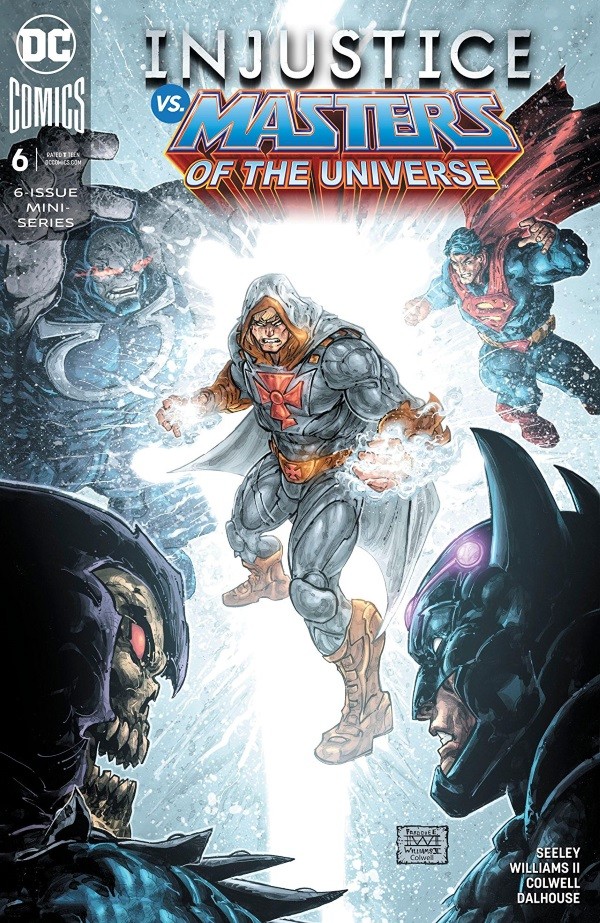 SYNOPSIS: He-Man is beset on all sides—by enemies and allies alike. If he helps Superman use the Nexus, he may save Earth from ever falling to injustice. But Skeletor has a marvelous trick up his sleeve! The battle rages, but who will prevail?

It’s just after Christmas as I read the final issue of DC’s Injustice vs. Masters of the Universe by Tim Seeley and Freddie Williams II.

I mention this not because I’m going to make some corny comment about how I must have been a good boy in 2018 because this issue is a gift (it is) or to share how it reminds me of the Christmas when I was 5 and I was lucky enough to receive both Masters of the Universe and DC Super Powers toys, proceeding to stage miniature off-scale battles with the figures (it does.)

I mention the holiday because the final issue, and really the whole run, of this incredible mini-series reminds me of The Muppet Christmas Carol.

Seriously. Hear me out.

The Muppet Christmas Carol is a movie that should be a joke, a gimmick, something that exists only superficially and only to make a quick buck. Instead, its a film that pulsates with heart and care and tenderness lovingly brought to life with attention to detail and wonderful performances. It adds layers and appreciation to both source materials. It’s become my favorite Muppet movie and my favorite telling of the Dickens classic on film.

In lesser hands, Injustice vs. Masters of the Universe could have so easily had the same fate as too many typical comic cross-overs series, ending up fun and cool to look but devoid of merit with a story that fails to provide a reason that the characters should actually interact outside its paper-thin plot and desire to cash checks.

Well, there is a good chance that DC is going to cash checks based on the route that was taken instead of following the same ol’ crossover recipe. Issue #6 delivers a satisfying end to a limited series as I can recall.

Tim Seeley’s storytelling is very well designed and on full display in this issue. There is a lot going on in order to tie up all the events that have unfolded to this point. Superman has more power than has ever been at his disposal and at the brink of rewriting history and existence, Prince Adam is without his Sword of Power or the Power of Grayskull, and there is an all-out war between Darkseid’s armies, the Evil Warriors, the Heroic Masters, and the Batman’s resistance. Seeley still manages to create moments of real emotion, character development and introspection, touching reunions, and story payoffs from seeds planted earlier in the run. The fact that he has been able to fill so much action in this issue while still leaving time for these moments is a real achievement. Potentially more impressive is that he was able to build stakes that deliver impacts which feel longstanding and real, even if we’re somewhat certain they won’t serve as canon for either franchise moving forward.

Freddie Williams II’s work is as strong as ever, his detailed and unique approach to textures and shading resonating on each page. The only criticism I’ve seen on William’s style focuses on his somewhat cartoonish and exaggerated figures, and you can see bits of that particularly in this issue with the sheer number of characters in action. What that critique misses is the stunning attention to detail in his panels and his ability to display character emotions, eliciting an emotional response from the reader in both the bombastic battle scenes and quieter asides. William’s work with colorists Jeremy Colwell and Andrew Dalhouse is gorgeous with strong blues, reds, and yellows popping off more muted and earthy background. There is a polished sketchiness to the art that is beautiful.

This book has been a pleasure to read and review. I recommend each and every issue and will be looking forward to a future Trade format release. My only complaint is that this is the series final issue. Pick up Injustice vs. Masters of the Universe #6, you won’t be disappointed.

And give The Muppet Christmas Carol a watch. – Garret Grev

RED HOOD AND THE OUTLAWS Annual #2 Review by Justin Lee