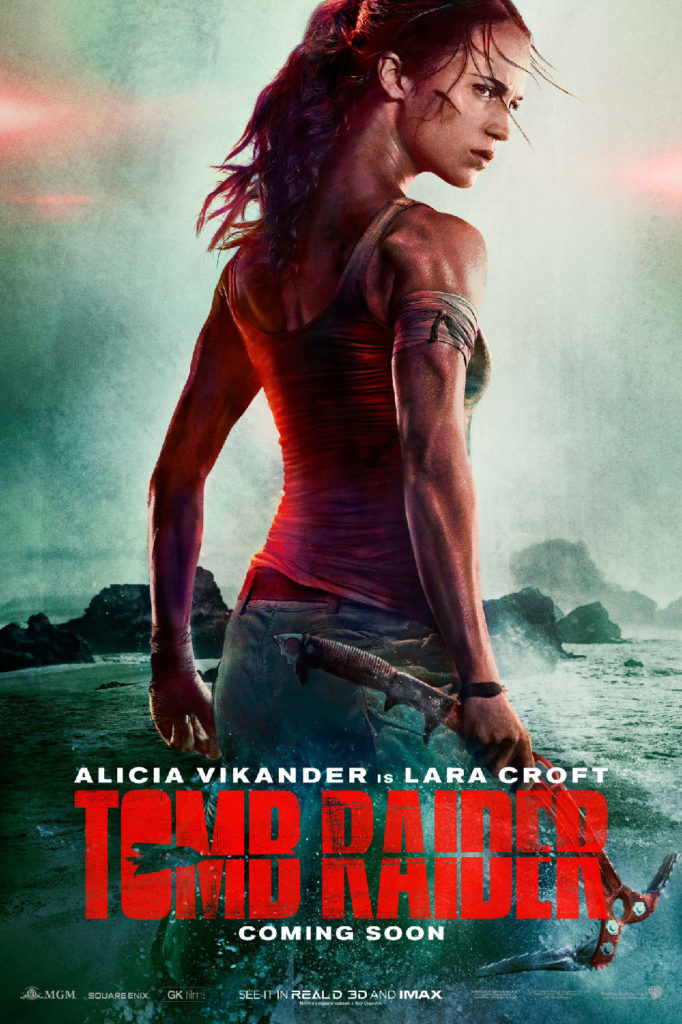 As Lara Croft in Tomb Raider, she dominates the screen and drives the story with relentless power. Forget those other two versions from 2001 and 2003 – they’re forgettable anyway.  Director Roar Uthaug gives audiences an intense, unified narrative that grips and keeps on gripping them until the very last frame.

Vikander gives a fierce, focused performance as Lara, daughter and heiress of Lord Richard Croft (Dominic West), a wealthy, but eccentric, adventurer. As the film opens, Richard has been missing for seven years. He had embarked on a journey to find and destroy the remains of an evil and powerful, ancient Japanese queen who was supposedly entombed alive on an uncharted island in the Devil’s Sea because she possessed the power to destroy any and all living beings.

Since Lara refuses to sign the papers that would declare her father dead, she has no access to his vast estate. The estate is handled by her appointed guardian, Ana Miller (Kristin Scott Thomas), and Mr. Yaffe (Derek Jacobi). With little money, Lara works as a courier and trains in mixed-martial arts to pursue her legacy as Lord Croft’s daughter. Father and daughter delighted in solving difficult puzzles together before his disappearance, and through one of those puzzles, Lara learns of her father’s quest to save the world from the spirit of evil queen. She sets out to his last known location, Hong Kong, to find the man whose boat carried Richard to the “lost” island. Instead, she encounters his son of the same name, Lu Ren (Daniel Wu), and persuades him to help her find the island.

Lu Ren reluctantly agrees, since his father is also missing, and they set out on the extremely dangerous journey, ultimately ending up shipwrecked and barely alive on the treacherous island. To her surprise, Lara discovers that there are already folks on the island. A menacing sort, Matthias Vogel (Walton Goggins), is leading a team of mercenaries and slaves in search of the same tomb Lara’s father was looking for. Now begins a lightening-paced game of capture and escape, cat and mouse as Lara tries to prevent Vogel from unleashing the evil her father had warned her about.

Be sure you got your popcorn and drink before the film begins because, believe me, you don’t want to miss any of the action. Goggins makes Vogel a formidable villain to challenge Lara, and like her, he’s not one-dimensional. Character development is a welcome strength in the narrative which leads to a tangible line of suspense to keep you mesmerized. This incarnation of Lara Croft is a conflicted young woman, longing for her father, who doesn’t win every fight and who suffers injuries and despair.

Alicia Vikander says in interviews that she was inspired in part by Gal Gadot’s performance as Wonder Woman. Although they come from different worlds, I’d love to see these two on screen together. It’s a completely new era for strong, female protagonists!

Tomb Raider provides a riveting, thrill-ride of a film. Your money will be well-spent! – JoAnne Hyde

RUMOR: Reeves’ THE BATMAN Rewrite Due Before End of the Year