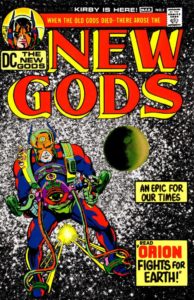 Well, you Darkseid fans are finally going to get to see him in a DC movie…but it may not be the way you expected/wanted.

Per DEADLINE.COM, Ava DuVernay (A WRINKLE IN TIME) is close to a deal Warner Bros to direct a big-budget film based on Jack Kirby’s THE NEW GODS.

Apparently, this project is going to be its own thing.  Here’s what the trade reported…

There is no connection to the other DC worlds being exploited for film right now by Warner Bros, where studio boss Toby Emmerich and his newly installed DC production president Walter Hamada are moving forward with new approach to filmmakers on their DC-based fare.

With all that said, here’s hoping that Henry Cavill’s Superman cameos in this film.  And what the hell…have Ben Affleck’s Batman take a boom tube to Apokolips just, well, because, you know? 😉

Kidding aside, if done right, I’m totally down for this.

For the full story, click on the source link above (below). – Bill “Jett” Ramey

BOFPC 193 | The Road to THE BATMAN Continues

THE BATMAN Has It’s Cinematographer