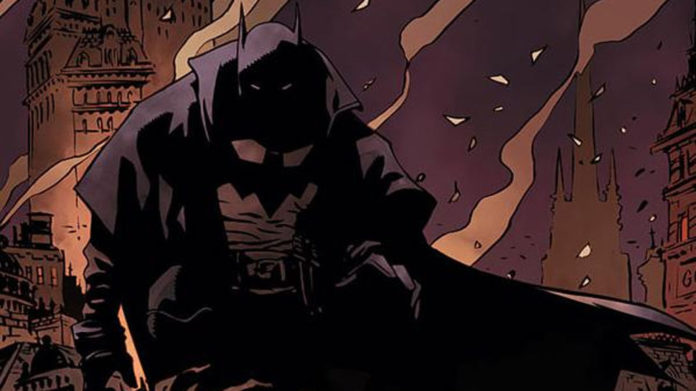 EDITOR’S NOTE: Welcome to BOF’s series of retrospectives/reviews of some of the best Batman stories featuring the DC Comics ELSEWORLDS banner.

I’m a fan of stories featuring alternative versions of Batman that are different from the “real” Batman — i.e. “in-continuity” — that we see every month in DC Comics.  As such, I always enjoyed the ELSEWORLDS banner of comics produced by DC back from the late 1980s into the early 2000s. 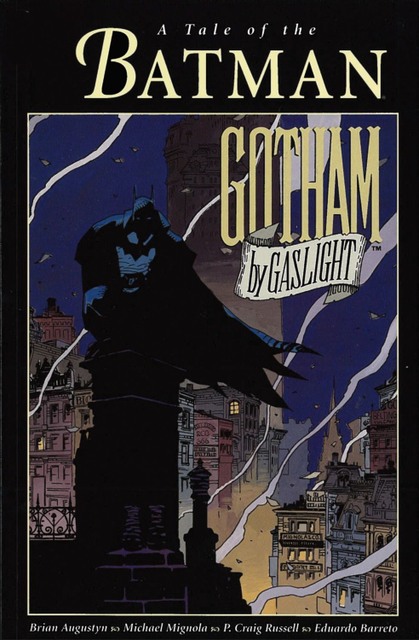 First published in 1989, GOTHAM BY GASLIGHT was the very first ELSEWORLDS title produced by DC (though it did not originally include the ELSEWORLDS imprint) and told the story of Victorian-era Batman fighting Jack The Ripper in Gotham City.  GBG was written by Brian Augustyn, with artwork by Mike Mignola, and inks by P. Craig Russell.

I first purchased this graphic novel back in 1989 amidst the “Batmania” that surrounded the release of director Tim Burton’s BATMAN starring Michael Keaton and Jack Nicholson in June of that year.

As I’ve mentioned many times previously over the years here on BOF, I was somewhat of a closet Bat-fan during much of the 1980s until BATMAN was released and it became, um, “cool” to dig The Dark Knight.  As a result, BATMAN got me back into the comic book shop for the first time in years and I proceeded to play catch-up by purchasing a slew of Batman comics and trades — including GOTHAM BY GASLIGHT.

Essentially, very few of the classic Batman mythos are changed, except the story is set in Gotham City c. 1889. Bruce Wayne’s parents — Dr. Thomas and Martha Wayne — are murdered by a killer in front of their young child. Bruce is raised by Alfred and travels the world to hone his fighting and detective skills.

He returns to Gotham ready to launch his mission. “Is it still here,” Bruce asks Alfred. “*Sigh* Yes, Sir. It’s waiting for you.”

Heading up Gotham’s police force is our old friend Inspector Gordon. While Gordon at first considers the mysterious “Bat-Man” an outlaw vigilante — someone simply taking the law into his own hands — they eventually forge a “working relationship” that will benefit each, as well as the city of Gotham.

While a character who obviously is The Joker makes a “cameo” in GOTHAM BY GASLIGHT (a “Happy looking Jasper” is how Gordon describes him), he is not the main villain of the story. It seems that Gotham has a serial killer on the loose. — one that has been imported from Victorian England. It is none other than the infamous Jack The Ripper.

Of course, Bruce’s return to Gotham coincides with the Ripper’s arrival and subsequent murders, Bruce looks to the police to be guilty as hell. In fact, he’s even thrown in jail (which conveniently helps out Bruce’s dual identity).

Of course, we all know it isn’t Bruce; so who IS Jack The Ripper?

Well, I won’t spoil it for you here (though I’m quite sure that if you’re reading this on BOF, you’ve probably already read GBG) the identity is revealed in the end by a partially predictable plot twist at the end of the story.

I love GBG and its take on Batman.  It doesn’t stray too far from the established mythos of The Dark Knight that we all know and love, but certainly brings a unique twist on the Batman mythos.

Mike Mignola does an awesome job with the artwork and it jibes well with the story by Brian Augustyn’s reflecting Gotham City in the 1880s. Think New York City as we saw it in the film GANGS OF NEW YORK.

In 2018, GBG got the animated movie treatment (after years of me banging the drum for it).  In the film, the core aspects of GBG remain — a Victorian-era Batman fighting Jack the Ripper in Gotham — but shaped into its own fresh and unique story.  Consider it way more “inspired by” than a straight-up adaptation.  (CLICK HERE to read my review of the GOTHAM BY GASLIGHT animated film.)

All in all, I consider GOTHAM BY GASLIGHT a classic Batman story not only due to its exceptional artwork, storyline, and overall quality but for the historical aspect as the first of DC Comics’ ELSEWORLDS stories. – Bill “Jett” Ramey