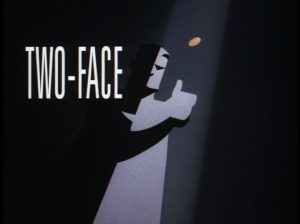 Harvey Dent, aka Two-Face, is one of the most well-known villains among Batman’s rogue gallery and arguably the most sympathetic. What makes his turn to villainy such a tragedy is the fact that he and Bruce Wayne (as well as Batman and Commissioner Gordon) were friends, something BATMAN: THE ANIMATED SERIES did well to build up to. We saw how close Bruce and Harvey were in “Pretty Poison,” but now we get to see their friendship deteriorate into the bitter rivalry its known for.

Harvey Dent has been fighting a battle on two fronts: one against infamous mob boss Rupert Thorne on the eve of his re-election and another within himself as his darker side is ready to burst. You see, in BTAS Harvey has always bottled his bad feelings since childhood, giving way to a split personality called “Big Bad Harv”, forcing him to seek help. When Thorne finds out and blackmails Harvey, it leads to the accident that creates Two-Face, igniting a war between the two criminals.

The re-working of Harvey’s origin into Two-Face – getting blasted in a chemical explosion rather than sprayed acid during a trial – works within the series. The moment the chemical tank explodes is actually fairly graphic for a kids cartoon as it’s a giant explosion with half of Harvey’s body seen getting the brunt of it.

The real issue I initially had a problem with when I was younger was reducing Two-Face to a split personality before the accident. At the time, I had found that a little hokey, taking away some of the complexities of the character. Now, though, I actually don’t mind it and think it works quite well within the confines of the series, especially as there is a clear difference between Big Bad Harv and Harvey Dent, even when they’re both angry.

Re-watching these episodes I was also struck by how mental illness was brought up. BTAS has always been a more mature cartoon, but the issue of mental health was openly brought up in a refreshing way. Remember, this was in 1992, yet we have Bruce telling Harvey there’s no shame in seeing a psychiatrist and getting help. It is impressive that they talked about the stigma so openly and positively.

Both Harvey and Two-Face is written very well. The show nails the main aspects of the character and Richard Moll does a fantastic job voicing the villain, helping differentiate the two personalities and bringing a good amount of sympathy to Two-Face. I still find the design choice pretty interesting – as a kid I thought it was mildly terrifying and ugly, but the blue face is a little much more kid-friendly than the comics or films, but this can’t be as graphic as THE DARK KNIGHT or even BATMAN FOREVER.

One thing I did find funny was the addition of his fiancé, Grace. Last time we saw Harvey, he was dating Poison Ivy. It might have added a bit more emotional weight t their relationship had we known Grace for a few episodes in the same way we knew Harvey prior to this, but it still worked for the most part.

Between the two episodes, I’d probably say “Two Face – Part 1” is the stronger of the two, but together they make a really good introduction to Two-Face and the struggle he faces (no pun intended) within. The emphasis on Bruce’s for not doing more to help Harvey gives the story the emotional weight that is somewhat lacking with Grace, and it’s great that the series continued to have Bruce view Harvey as a friend for the most part. – Ricky Church