I had a couple of Tweets from a great BOF’er directed my way that got me to thinking.  Before I get to the thinking part, here’re the Tweets… 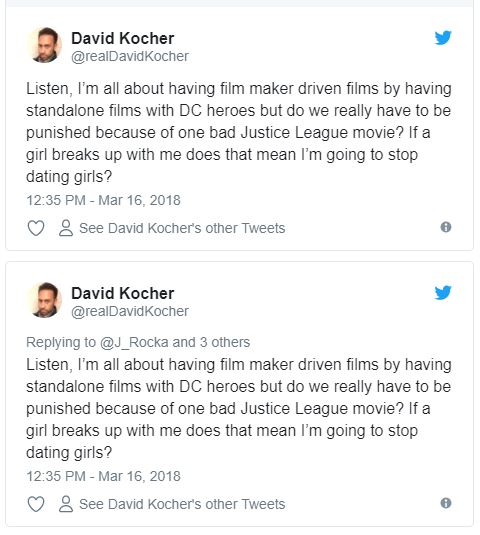 Let me start by saying I totally get what this gentleman, and fans like him, are thinking and saying.  As huge fans of DC Comics and the premise of the Justice League, they legitimately had been waiting their entire fan lives for a serious live-action Justice League movie.  Believe it or not, I respect them for it.

And what did they get?  Last year’s JUSTICE LEAGUE.

Furthermore, most of these folks also had been waiting their entire fan lives for a serious live-action film where Batman and Superman teamed-up and stood side-by-side.

(And yes, I know that there are many fans that love both of these films…but let be realistic.  It’s an irrefutable fact that both of these movies were received poorly overall by both the general audience and critics, and under-performed at the box office.)

Why? Because y’all, this whole BvS/JL universe is toxic as hell right now.

If “Justice League” is in the title of any DC movie in the next 8 to 10 years, the fine folks at Warner Bros. would be making a HUGE mistake, in my humble opinion.

What they SHOULD do is simple: Make a lot of GOOD DC movies, helmed by TALENTED filmmakers, and let ‘em do their thing WITHOUT having to worry about CONTINUITY and a SHARED CINEMATIC UNIVERSE.  If one wants to believe that a DC movie is part of a greater cinematic universe, fine, they certainly can.  If one does not, that’s fine too.  They can be both at the same time and appeal to everyone in the audience, without all the cameos, winks/nods, and post-credits tags.

My semi-rant brings me to my question at hand for DC fans: Is a shared DC film universe a must?  Can you not enjoy DC movies unless they are part of greater DC on film world?  Do you really need the solo films to feature cameos/post-credit scenes that basically exist only as a building block to a future team-up movie?

If that is the case…why?

Just because some fans desperately want it doesn’t mean it must happen.

I’m of the belief that these great DC characters work better on their own and in their own worlds.  I dismiss the argument of “it works in the comics and animation” because we’re talking about live-action films that are targeted to the general audience, not comic book fans.

Look, Warner Bros. tried the shared cinematic universe thing and it failed.  In fact, what should’ve been the crown jewel and pinnacle of a live-action, shared DC universe – JUSTICE LEAEGUE – was an embarrassing abomination.  Would it be wise of them to continue beating a dead horse just to please the segment of fans who want DC films to interconnect?

It’s time (again) for the focus of Warner Bros., when it comes to DC on film, to simply make good movies helmed by strong filmmakers who have a vision and a passion for the characters.  They don’t need to be saddled with having to insert mini-commercials for other DC movies into their films.

And one day down the line, maybe the time will be right team-up movies, like: Batman/Superman, or Wonder Woman/Aquaman, or Ambush Bug/Booster Gold. And, yes, there will even be a time to give a Justice League movie, another shot.

Now, however, is not the time.  The proof is not in the puddin’, but in the box office. – Bill “Jett” Ramey