Only two episodes remain for Swamp Thing and the town of Marais is starting to come unraveled.

Avery Sunderland is diving into his precious swamp trying to save his life.  Maria Sunderland and Sheriff Cable seem to be running the show while coming together vs. a common enemy.  Abby Arcane is back in Atlanta, in more danger than she realizes and Swamp Thing is being hunted down like a renegade gator.

“Long Walk Home” picks up right where we left off the last episode.  Avery is barley alive wandering through the swamp fighting off his own hallucinations and the swamps twisted taste for the theatrical.  Finally, we learn the details for Avery’s love/hate relationship with the swamp.  It was disturbing yet glorious to see how this childhood memory leads into Avery and Swamp Thing finally meeting face to face for the very first time, Frankenstein and his monster. 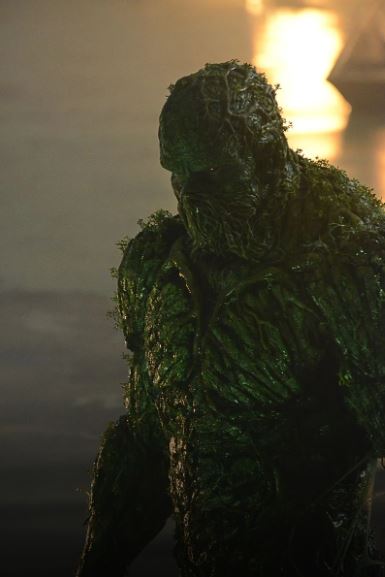 The hunt for Swamp Thing will make fans of 90’s action movies have a moment of nostalgia.  You will not be able to watch this episode without thinking of Predator 2.  Just think of Gary Busey in a meat locker but this time in the bayou of Louisiana.  It’s a wonderful moment to one of the more memorable action battles of my childhood. Smoke, bullets, laser sights and screaming what is not to love?

The Swamp Thing is a beautiful symphony of horror.  It is the little things that the show constantly nails in every episode.  The lighting on the show really brings eeriness to the main character.  The Swamp Thing is always lit with a degree of spookiness. You hardly see him clearly as the light creeps over his broad shoulders or beams through a broken and boarded window.   You are just left intimidated by the sheer size and confidence of Derek Mears as he steps into the light with those red eyes.

As we reach the end of Swamp Thing one starts to wonder what will and will not be answered.  Characters like Blue Devil and Susie Coyle might be the loose ends that never get tied.  While Susie was used as a plot point earlier in the series I start to wonder is her fate going to be left for fans to speculate on the battlefields of Twitter rather than seeing it unfold as intended.

While you can start to see how the shortened season now affects the show it doesn’t bother you because of what they have built up to this point.  You are neck-deep into the scandals and mystery of the main characters.  From Avery’s double/triple life, Maria’s backstabbing to Swamp Thing’s capture.  The show does do a good job of tying up the more important elements of the story. – Peter Verra