SYNOPSIS: Robin reunion! Nightwing, Red Hood, Tim Drake, and Spoiler guest-star as they track Damian down with a plan to bring the young hero back to Gotham. Back to his family. But the son of Batman plans to win the Lazarus Tournament and refuses to return. What starts as a happy reunion quickly turns into a Robin rumble! 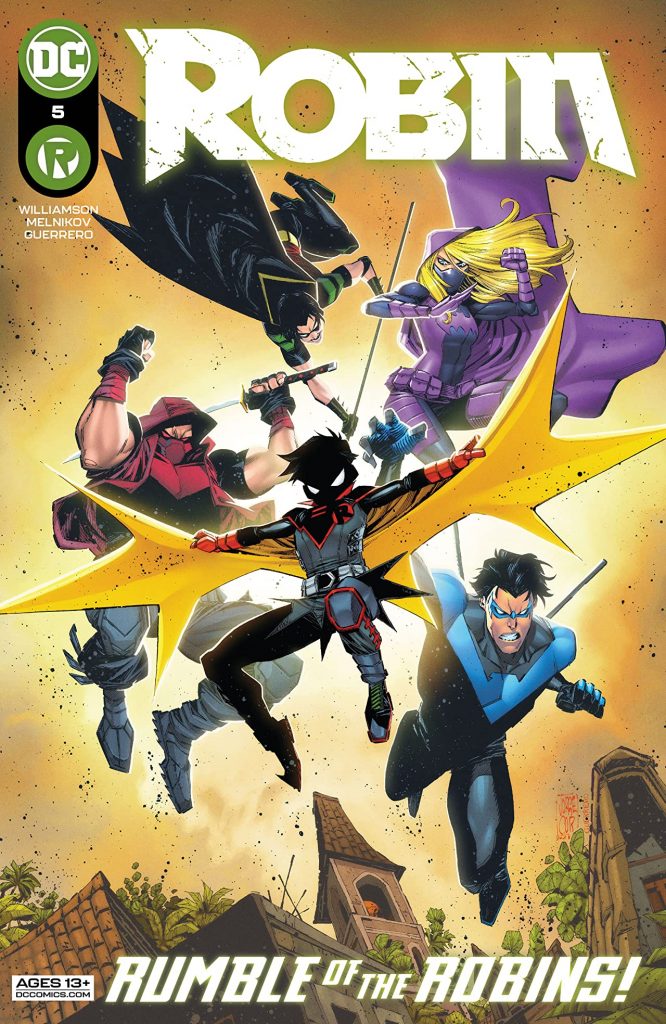 Grab a box of tissues for this one, folks.

It’s all Robins on deck as those who wore the domino mask stage an intervention with the current mantle holder, Damian.

Of course, this is a superhero comic, so it’s not as simple as everyone sitting in a circle and talking it out. Given Damian’s penchant for making things difficult, it quickly becomes a rooftop race, with Damian agreeing to go back to Gotham with the group if any one of them can catch him.

It’s not just about physical prowess and Damian uses psychological strikes to his advantage, catching Jason off-guard with a hug, calling Dick “Ric”, and bringing up Steph and Tim’s relationship troubles. If you think Damian is a little jerk, well, the first half of this issue is gonna back you up on that.

But then Dick catches up to him.

And gives him a birthday present.

What follows is going to be looked at as one of the best character moments in Damian Wayne’s history. It’s scenes like this when Damian’s vulnerable side gets revealed, that endears me to this very brusque character. And it’s fitting that it’s a moment with Dick Grayson.

Back in Batman & Robin (2010) #10, Damian let slip just how much being Robin to Dick’s Batman meant to him. It was the moment when I really began to like the character. Williamson plays off all that history between these two and how their bond has endured to the present day.

The gift that Dick bestows also opens Damian up to talking about the death of Alfred. I don’t want to say more, but I haven’t been this moved by a comic since Nightwing #83. Granted, that was last week, but it was a very heartfelt issue and this is perfectly in line with that.

I’m not sure why Melnikov wasn’t on art last time, but if it was to make this issue perfect, I’d say he succeeded. He imbues the rooftop chase with the requisite speed and energy, playing around with the layouts in a two-page spread as the race begins. When it comes time to get under the skin of Dick, Jason, and Damian, he rises to the emotional beats with equal aplomb. The sorrow and elated confidence Damian demonstrates will have you plummeting and soaring right beside him.

Of course, all of this leads to the beginning of the tournament, which will be in full effect next month. I could go on and on about this issue, but trust me, you really want to pick this up and read it for yourself to get the full experience. Williamson just nails the characterizations and Melnikov and Guerrero bring it to vivid life. Bonus praise goes to whoever decided to use Tim’s old logo in the title! I never get tired of seeing it! If you’re a Robin fan, this is one issue you can’t miss! – Javier E. Trujillo THE BATMAN is Returning to Liverpool