SYNOPSIS: Fly into director Richard Donner’s Superman once more in Superman ’78! Written by Robert Venditti (Superman: Man of Tomorrow) and drawn by Wilfredo Torres (Batman ’66), Superman ’78 tells a brand-new adventure in the world of the beloved film. A bright, shining day in Metropolis is interrupted by a mysterious drone that crash-lands in the city and starts wreaking havoc. This looks like a job for Superman! But where did the metallic menace come from, what is its purpose, and who is Brainiac? 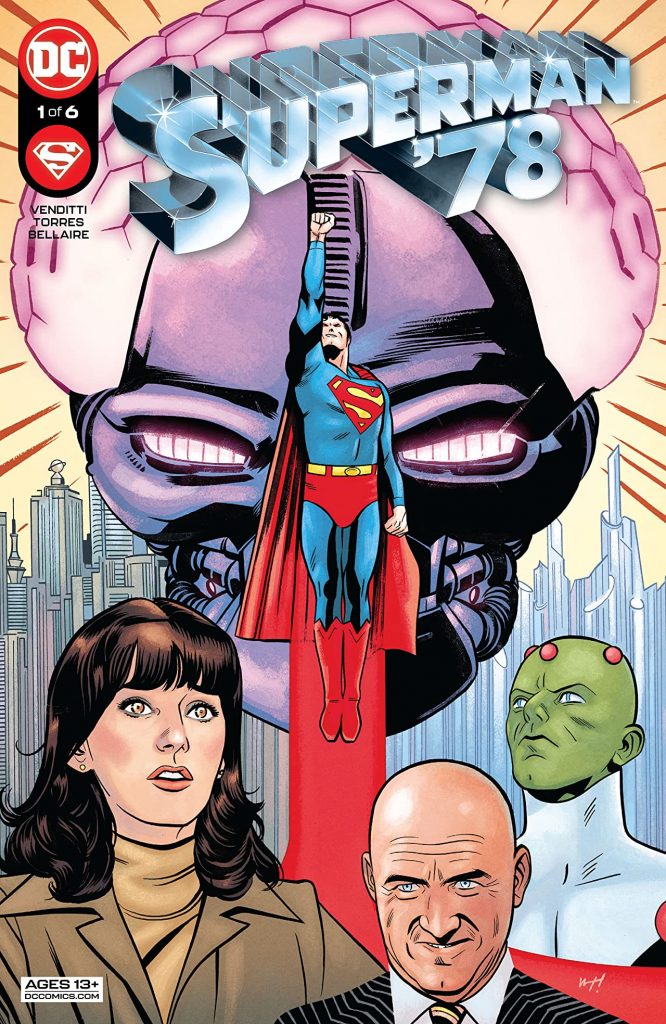 Up in the sky!

It’s another DC Comic tying in with a live-action property from yesteryear!

Writer Robert Venditti is joined by artist Wilfredo Torres, colorist Jordie Bellaire, and letter Dave Lanphear in bringing what they imagined Brainiac would be like if director Richard Donner applied his sense of verisimilitude and got the chance to bring the villain to the silver screen.

It’s a moment we’ve all seen before-Jor-El holds Lara tight as their son rockets away from their doomed planet. However, Venditti shows us a fleeting moment Donner didn’t — something happens to the couple and they begin to shimmer as Krypton meets its demise. It recalled a similar moment for me, one which saw Jor-El rescued from his homeworld’s destruction by Watchmen’s Dr. Manhattan to test the then-current Rebirth-era Superman. In this reality though, Brainiac is behind it, setting the stage for events that are guaranteed to rock the Metropolis Marvel to his core.

As the story shifts to the present day, we see Lois and Clark head off to work. Venditti makes quick work introducing us to the familiar cast, even throwing in a quick undercover rescue for Clark! It’s not long before the real action begins and the threat of Brainiac arrives.

Brainiac is a complicated villain to describe, having dozens of variations across the Multiverse and the timeline. One of the most well-known elements across iterations is that he is a collector of worlds, often shrinking an element of society, cataloging it and its information, and preserving it in a bottle. Venditti keeps this characteristic for the “prime” version in this story, but he’s not the only Brainiac we see.

The creators wisely also use the robotic Brainiac made popular in such 1980s stories like Crisis on Infinite Earths and the Super Powers toyline. I always loved that design as it was prominent in my childhood and my mind was racing, picturing a scenario where Donner actually brought this to life. If Cameron could make the Terminator work in his low-budget 1984 sci-fi classic, I totally believe Donner could be equally successful with the Warner Bros. coffers behind him!

The Batman ‘89 comic has the benefit of having the film’s screenwriter, Sam Hamm, penning the adventures of Michael Keaton’s Dark Knight once again. Sadly, writers like Mario Puzo and Tom Mankiewicz are no longer with us. Fortunately, Venditti has perfectly captured each and every Daily Planet character’s voice. It’s not hard to hear Jackie Cooper barking at the meek-sounding Christoper Reeve in their morning conference.

Wilfredo Torres matches Venditti’s words with his own unique, at times simplified, style. He’s not going for photorealism with his art, but the essence of these actors is there. Reeve and Cooper are his standouts when it comes to spot-on likenesses. The way he depicts Reeve’s body language, both as Clark and Superman, just feels right, making it that much easier to believe you’re in the world of the film series. However, I don’t see as much of Margot Kidder in his Lois Lane. He has shared his prior takes on key moments from the first two films on social media and I saw much more of a resemblance to Kidder there, so I know he’s got it in him.

Fans of Superman (1978) should be quite pleased with this debut issue. It’s a fun blast to the past highlighting a simpler world, but one that’s not afraid to test the mettle of the Man of Steel if one is to believe the upcoming solicitations for future installments. If Christopher Reeve is one of your favorite interpretations of Superman, you can rest easy knowing that the creative team does him, and the recently departed Richard Donner, justice. So, crank up the John Williams soundtrack and believe once again that a man can fly! – Javier E. Trujillo