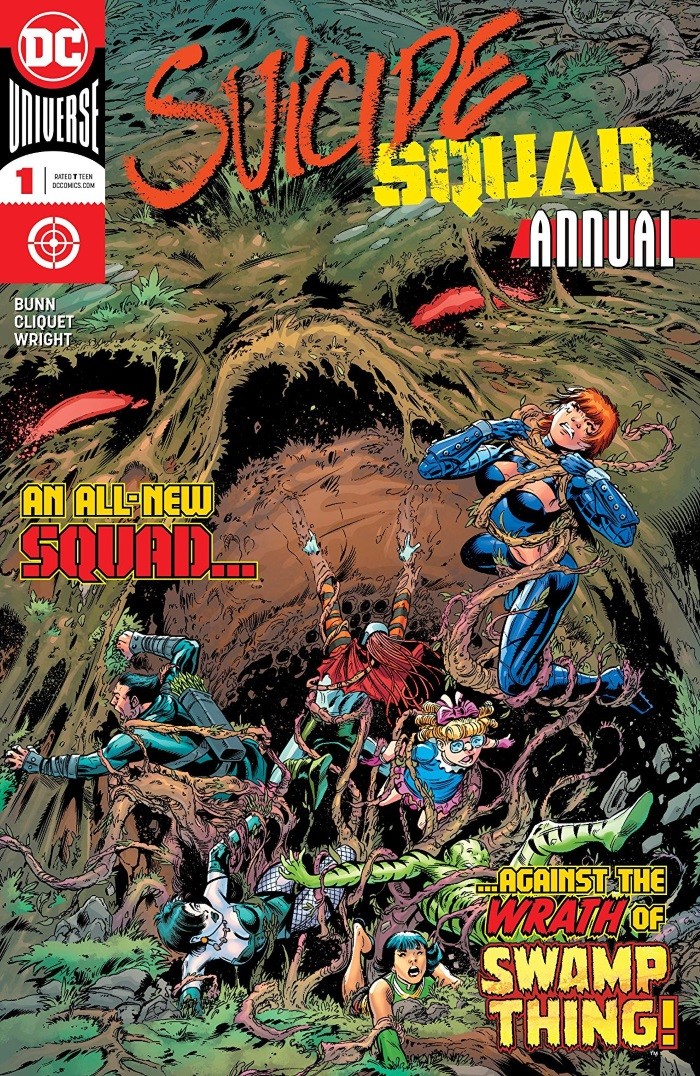 SYNOPSIS: Thrown together to apprehend an escaped inmate, Solomon Grundy, Rag Doll and Merlyn head into the muck surrounding Belle Reve, but no one is prepared for a meeting with the Swamp Thing. Bodies decay quickly in the bayous of Louisiana, and the avatar of the Green doesn’t care if the Squad makes it out alive.

The great thing about the Suicide Squad comic is that it gives the writer a free reign with regards to the villains they can use. The only requirement is that they are in Belle Reve prison. Suicide Squad Annual #1 comes from veteran comic writer Cullen Bunn, who while versatile is largely known for his horror/noir style of writing.

This is exactly what this book brings.

In a throwback to the Suicide Squad: Monsters arc from a few years ago, we find the Squad once again facing a paranormal enemy, but this time it is not Task Force X. As we know from issue #45, Task Force X has their hands full in Atlantis in the Battle for Atlantis Aquaman crossover story. So in order to deal with this new threat, Amanda Waller calls upon other prisoners from Belle Reve. Enter Merlyn (archer), Scream Queen (vampire), Shimmer (matter manipulation), Skorpio (blades), Tad Jones (force fields, martial arts), Rag Doll (contortionist, blades), and Baby Boom (explosives). This new crew of expendable villains is summoned to track down prison escapees Candace Laramire and Dennis Gaines, two strangers that were abducted by unknown parties and surgically conjoined like Siamese twins. Due to their new “situation” they went mad and started to abduct, murder, and mutilate people. During a procedure at Belle Reve, Dennis dies on the operating table but Candace somehow survives and escapes.

Our new Squad tracks Candace to the swamp where they encounter Swamp Thing and the action picks up there. During their quest they find out that Candace is not at all what she seems and realize they are in over their heads. Plenty of surprises ensue and they are forced to make a rash decision to save their lives.

The entire creative staff for this book is solid if not spectacular. When dealing with a more macabre storyline it’s important to have drawings that are very detailed and colors that are very vivid. Ronan Cliquet and Jason Wright do an excellent job here, respectively. Pat Brousseau’s lettering is also spot-on, especially when explaining the more morbid parts of the story.

I don’t know why this came out in August and they didn’t hold off on it until October for Halloween. It’s a solid book and if you like horror it definitely fits the bill. – Eric Holzmann