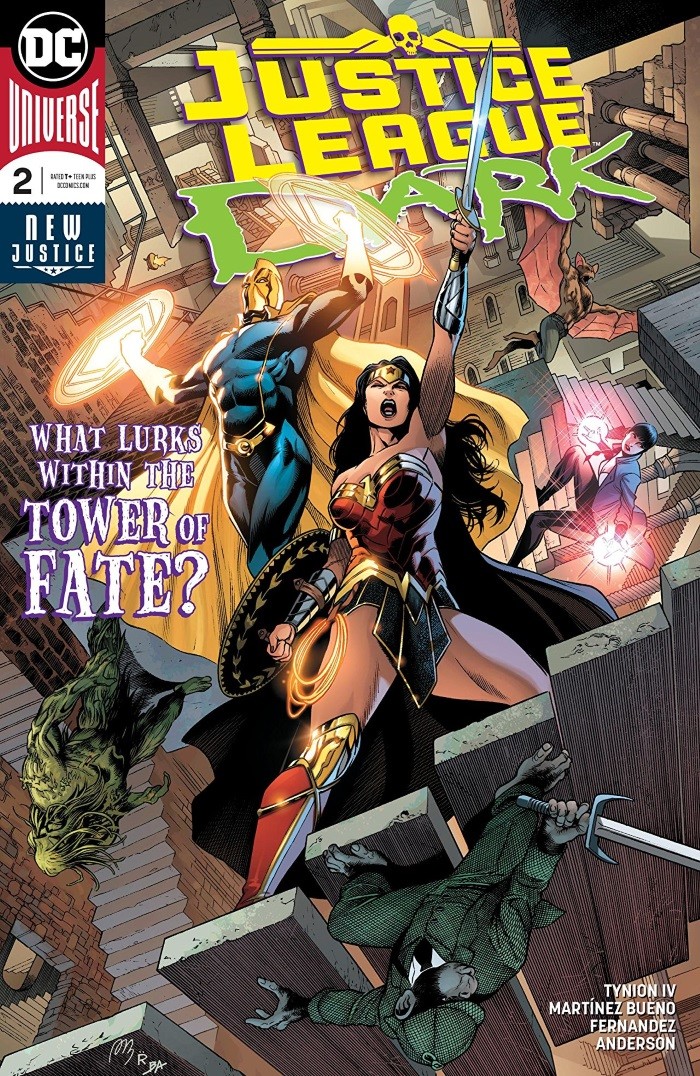 SYNOPSIS: Plagued by a rash of otherworldly resurrections, the new JLD team begins scouring the shadowy corners of the DCU looking for leads. Turns out, this latest mystery ties back to the Tree of Wonder, last seen laying down roots in JUSTICE LEAGUE: NO JUSTICE—and it bears poisoned fruit to boot. The Tree serves as a doorway from the Realm of Magic to our world, and the Upside Down Man is just the first of many all-powerful mystic entities looking for a new haunt. It’s gonna take a major twist of fate for our heroes to get out of this one…

Magic on earth is broken.  And its original owners are coming to take it back.

Gravely concerned about the devastating and deadly disturbance surfacing in the world of Magic, Wonder Woman, Zatanna, and the other members of the Justice League Dark head to Salem, Massachusetts to seek out Doctor Fate at the windowless Tower of Fate, an M.C. Escher-inspired jumble of impossible stairwells and gravity-defying architecture that overlooks the enigmatic Tree of Wonder.

Swamp Thing parts ways with the company before entering the Tower; there is a deeper mystery at the Tree of Wonder that he must investigate.   It is clear that he has a unique connection to the Tree, and a clandestine meeting between him and John Constantine divulges that Swamp Thing may know a bit more about what’s going on that he is not disclosing to the others.

Back at the Tower, Doctor Fate welcomes the heroes inside, instantly chiding Zatanna for bringing Wonder Woman into an issue that should be left to the community of magicians to resolve.  He whisks Wonder Woman and Zatanna away, leaving Bobo and Kirk Langstrom alone, where they begin a preliminary investigation of their surroundings.  The inscrutable and marvelous nature of the Tower doesn’t have Detective Chip fooled.  “All this wonder?” Bobo says.  “It means that somewhere out there, there’s something dark and terrifying.  And it’s always closer than you want it to be.”

In a separate chamber within the Tower, Doctor Fate regales our two heroines with a tale of primitive man.  Our ancestors sought to harness the power of Magic, but the awesome nature of Magic was too great to bear.  Magic has grown beyond their control, and now the original owners of Magic are being summoned to take it back.  Zatanna asks to speak to Nabu, the original Lord of Order who gave Doctor Fate his power.  As it happens, Nabu is closer than Zatanna thinks – and his intentions aren’t as honorable as she expected.

For there is yet another mystery within the Tower of Fate… and he is very, very hungry.

The Upside Down Man isn’t on his way.  He is already here.

This is a great issue.  I was a bit concerned that there was too much happening in the story with Issue #1, but writer James Tynion IV uses this chapter to ground the story and sets it on a clear, engaging path.  He continues to weave Wonder Woman into this story with a deft hand– the opening pages offer a glimpse of Diana as a pre-teen, discovering a disturbing act of Magic on the isle of Themyscira.  And though the overall storyline is dark, Tynion skillfully uses Bobo and Kirk Langstrom as comedic relief.

Artist Alvaro Martínez Bueno’s pencils shine once again: jawbones, eyes, and splintered ribs are sent flying in a frenzied battle, and topsy-turvy layouts and cockeyed panels mimic the off-kilter nature of the Tower of Fate.  The balance between horror and beauty is spot on.

Laid overtop the pencils are lush colors by Brad Anderson, whose moonlit palate is intoxicating.  Themyscira at night, Swamp Thing standing before the Tree of Wonder, and Doctor Fate’s brilliant golden mask arrest the eye with every turn of the page.

As I said above, this is a great issue.  The flow of the story was better than the first chapter, and the introduction of the Tower of Fate (and ensuing investigation) injects a healthy dose of fun.  And that last page… it’ll drop plenty of jaws. – John Funderburg