“She Was Killed by Space Junk” Review by Mance Fine 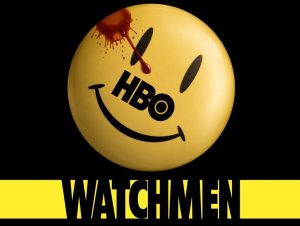 I’m sitting here, still in awe of what I just watched, and feeling frankly ill-equipped to articulate exactly how this show makes me feel. What a perfect homage and brilliant continuation of the source material this sequel series is.

“She Was Killed by Space Junk” really starts to shine a light on where the original characters from Alan Moore’s are in the modern-day of the WATCHMEN universe.

The episode is all about Laurie Blake, who is played brilliantly by Jean Smart, the second Silk Spectre that fell in love with Doctor Manhattan until his continuing evolution negated his human connection with Laurie and the rest of the world.

Laurie, who ended up with Night Owl at the end of the graphic novel, has come to resent masked vigilantes and has joined the FBI as an agent on the vigilante task force who seems hell-bent on taking down apparent Batman knock offs and other masked would-be do-gooders. Laurie is seemingly very good at her job, appearing to be that no-nonsense detective that is one step ahead of everyone else.

The most interesting part of the episode is Laurie’s one-sided conversation with Doctor Manhattan where she retells the events of the original story that we hear in pieces throughout the episode. Her retelling is done creatively in the form of a “joke”, as she recounts the fate of Ozymandias, Doctor Manhattan, Night Owl, and in the end, herself.

This is a fantastic and clever way of making all of the events of the graphic novel very real in this universe, while catching the fan up and informing the casual viewer of the history of the show’s universe.

She calls John from a phone booth set up to apparently send communications to Mars so that subscribers can speak to Doctor Manhattan. As Laurie condescendingly states, the population thinks John still loves and cares for them when he’s been gone from the planet for 30 damn years.

But the most shocking revelation?

John DOES hear her. The way this arc played with the episode and unfolded was just spectacular, and well, you really just need to watch it if you haven’t already.

After episode #3, I think the original characters (those still living) are going to play a much larger role in the sequel than I had initially thought.

Oh, and speaking of that, Night Owl is very much alive and is apparently incarcerated. Because of this, Laurie is goaded into going to Tulsa to investigate Chief Judd Crawford’s murder by a senator claiming he can help to free Night Owl by pardoning him once said Senator becomes President.

Worlds collide, and we find Laurie questioning Angela at Chief Crawford’s funeral after Laurie’s initial investigation left her suspicious that the Seventh Brotherhood may not be the culprits after all. That is until another terrorist in a Rorschach mask sneaks into the funeral with a bomb strapped to his chest.

Laurie and Angela manage to save the day but find themselves quickly at odds. Laurie has not only quickly deduced several of the irregularities surrounding Chief Crawford, but is also aware that Angela knows as well. But, as intimidating as Laurie can be Angela won’t be scared into confessing. It seems they may eventually have to work together to get to the bottom of what was in the Chief’s closet and why it was there.

Finally, I still don’t know what the hell is up with Adrian Veidt — who finally comes out and confirms he is indeed Ozymandias — but it’s creepy, pretty psychopathic, eccentric, and intriguing.

So, in other words, it’s perfectly spot-on for Ozzymandias.

This time, he’s seemingly trying to create a spacesuit out of common household parts.

Either way, I love the amount of mystery that surrounds him, all of which is a blend of Irons’ performance, the writing, and the brilliant way the show is edited.

I’m so excited about the plot and peeling back all of the layers and finding the various Easter eggs as I can spot them. I wasn’t sure if the fantastical elements of the graphic novel would be watered down in the show, and Lindeloff doesn’t disappoint. The brief hints at Manhattan and his powers, as well as eye candy like Ozymandias trying on his old costume and pictures of the original team of heroes are wonderful, and the show has found it’s pacing in terms of giving us just enough answers while continuing to ask more questions.

The cinematography is beautiful, and more importantly, Lindeloff has managed to translate the spirit of the graphic novel — and it’s sense of perspective — to the show.

At least so far.

I’m hooked, and I only see things getting better…except for that giant blue thing.

I’m taking the + of the A for that Mr. Lindeloff. Seriously, WTF?

Maybe that was his homage to Zack Snyder’s adaptation? – Mance Fine

Wright Says THE BATMAN is Grounded in Gotham, Americana