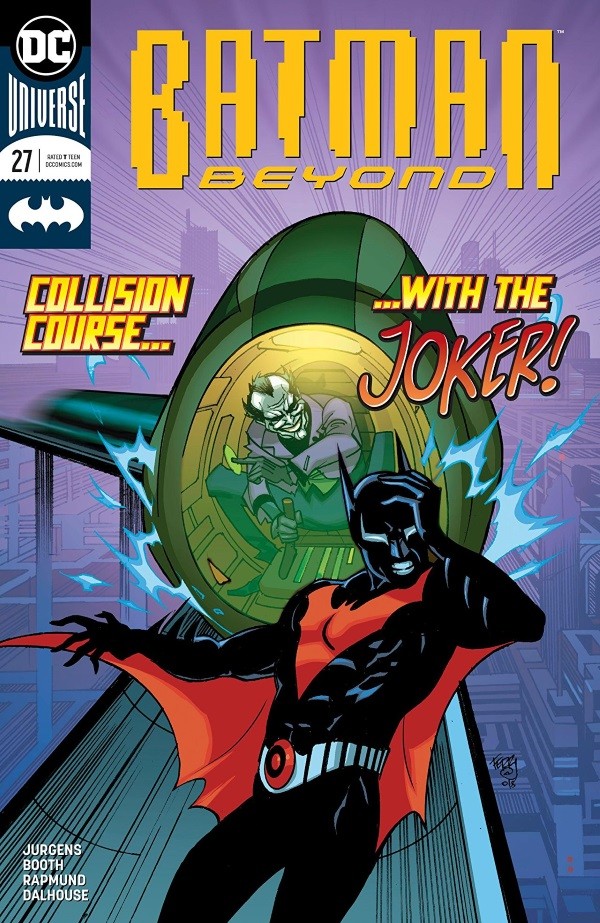 SYNOPSIS: The Clown Prince of Crime amasses his own army, and there might not be enough of Batman and Robin left to stop them. The only thing more dangerous than The Joker is a city full of weaponized Jokerz being pointed at Gotham, led by the Clown Prince himself! With his old nemesis firmly back in play, retiree Bruce Wayne becomes obsessed with bringing him down. But does he have enough in the Bat-tank? And what happens when Gotham’s terrified citizens start backing The Joker’s play?

After the great issue we got last month, we get a kind of lackluster follow-up. I’d love to say that this issue was action packed and full of crucial story points, but it feels like more chaff than wheat. We get some fun material concerning the Joker, but almost everything with Terry seems like filler.

The Joker is as psychotic as ever, probably more so with his expendable treatment of his gang, The Throwbacks, and his hatred of what Batman and Gotham have become (technologically advanced and clean and safe respectively) presents a nice dichotomy in ideologies between hero and villain. That’s definitely where Dan Jurgens’ writing shines. The tension between Bruce and Dick/Ric over the use of Matt as Robin is also growing, hopefully, that angle won’t be abandoned. In stark contrast, the sub-plot with Terry and Melanie just seems like it’s there just to fill out the rest of the 22 pages of the book.

Norm Rapmund and Brett Booth’s art is very good. The character designs all look great, they gave the Joker the old Jack Nicholson receding hairline, which I thoroughly appreciate, and the “upgraded” Joker we get later on is unhinged looking and very effective. The Throwbacks all look completely unique and fitting for a true Joker gang.

Hopefully, this issue is just a bit of a lull before the wrap up of one of the coolest Batman Beyond arcs we’ve ever gotten. – Matt Whaley

BOFSS 3 | “Things You Like/Love About a Comic Book Movie...