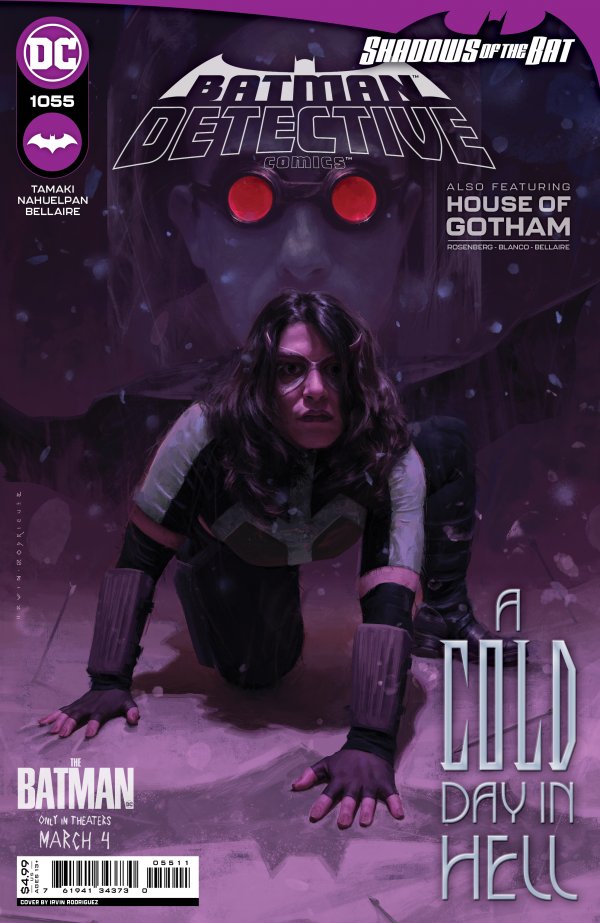 SYNOPSIS: The Tower under siege! With their grand scheme crumbling around them, Dr. Wear and the mysterious Dr. Ocean have lost control of Arkham Tower to the patients it houses…who just so happen to be some of the most violent, murderous villains Gotham City has ever seen. The Bat-Family on the inside are in shambles: Huntress is wounded, Nightwing is carrying 175 pounds of smarmy jerk on his shoulder, and Dr. Meridian is incapacitated. Who’s left to save the civilian hostages from this nightmare? Hmm…wasn’t there a patient who thought she was Harley Quinn?

Then, in “House of Gotham” part 9, the boy is growing up…and growing into the man that Gotham City has made him. Through the trauma of his time with the Penguin to the terror wrought by Azrael, a new mission springs to mind for this lost son of Gotham…murder.

Last week Mariko Tamaki wrote an issue that felt like previous issues we have already read in Shadows of the Bat.  This week she rebounds with authority, delivering closure to one plot point and a twist that none of us saw coming.  Amancay Nahuelpan is the new artist on this book, and his art is very different from Max Raynor and Ivan Reis stylistically, and he might be the perfect fit for this story.  Mathew Rosenberg’s “House of Gotham” once again delivers a jaw-dropping chapter of Gotham’s most unfortunate youth.  I doubt you will find a better book to read on new DC day.

Detective Comics #1055 very well might be the best issue of “Shadows of the Bat.”  Tamaki takes some risks in this book.  Dr. Ware seemed to be the focal point of this story; he was the one dealing with the gangs, the government, and the inmates, but as the Penguin says, “things change.”  With all of Gotham watching the chaos in Arkham Tower, a new set of villains emerge to take center stage.  Three of them were teased from the beginning, and one of them is an OG who has crept forward from the shadows in a dramatic fashion.   This book is packed with pages that will shake the reader to the core.  There are new hostages; some are civilians, some are heroes, and they are all of the high stake variety.  While Nightwing and Huntress have solid moments in the book, primarily action-related, Psycho-Pirate in three panels on one page is an emotional force.  He shares details, and now it makes you wonder what was going on between Ware and Psycho-Pirate.  He may not be the villain of this story but a pawn who has been played perfectly from the get-go.

Amancay Nahuelpan is an artist I am not familiar with by name.  As I look at his credits on DC’s website, issues of Nightwing, Wonder Woman, Justice League Dark, Crush & Lobo, and Batman: Secret Files are a few of the titles to his name.  I have some of these in my long boxes, so forgive me for not recognizing the name.  Nahuelpan’s art was perfect for this issue, and Gotham sets the tone right off the bat.  Nahuelpan has an edge to his art; it is sharp but not too delicate you can see the grit through his use of hatching and shadows.  Nahuelpan uses hatching to emphasize his action scenes and those tense moments.  From the elevator shaft escapades of Nightwing and Huntress to the blasts of ice from Mr. Freeze’s gun, there is not a panel in this book that is not stunning.

Nahuelpan wasn’t alone in this artist masterpiece as Jordie Bellaire returns to Detective Comics since her run on issues 1034–1046.  In my opinion, Bellaire is one of the top colorists in the comics game.  She knows when to warm or cold to set the mood and even mix the two on the story’s final page.  Her use of red and blue when Freeze and Huntress are fighting is mesmerizing; you will stare at those pages in awe of their beauty.  Bellaire’s use of color reminds me of when a filmmaker uses a filter; she is that creative.  Colors from across the visible spectrum are on display in this book.  If you have read my past reviews, you know I was a bit critical of some choices made by that artistic team.  Well, there are none of those here.

When it comes to “House of Gotham” one could say this tale is wasted as a backup, but it is so unique it’s hard to complain about anything.  Matthew Rosenberg has taken us on a journey with the people of Gotham City.   In particular, one unnamed boy has followed this boy and his adventures throughout the city.  Three Robins and Knightfall have passed.  He has been under the tutelage of some of Gotham’s most prominent names in the Underground.  Each of these interactions has paid off.   From sleeping in a closet beneath the Iceberg Lounge to a pitstop Arkham now the beginning of No Man’s Land.  Our red-headed friend has a master’s degree from the school of hard knocks.  He has made a name for himself (even if we don’t know it) with the worst in Gotham and has started to use it to his advantage.  Chapter nine of “House of Gotham” is the most impressive yet.  The story is filled with a young man’s determination and drive, showcasing how far he has come, caring for others and not just looking out for himself.  He sees the bigger picture; he sees a purpose.

Detective Comics #1055 is the best issue you will read from any publisher this week.  While the price is still a hefty $4.99, you get your money’s worth.  Every page is filled with twists, turns, and emotions from both stories.  Everyone involved in this book is at the top of their game, and we are truly blessed to have such an excellent comic in our hands.  Tamaki took risks I didn’t think she would, doing things I didn’t see coming.  Rosenberg gives readers a point of view that we are not used to in Gotham, the civilians.  You have two completely different stories, and both are nothing short of captivating.  No book on the shelves mixes story and art so perfectly.  If you don’t have this issue on your pull list, turn around and head to the comic shop because you missed out on the book of the week. – Peter Verra