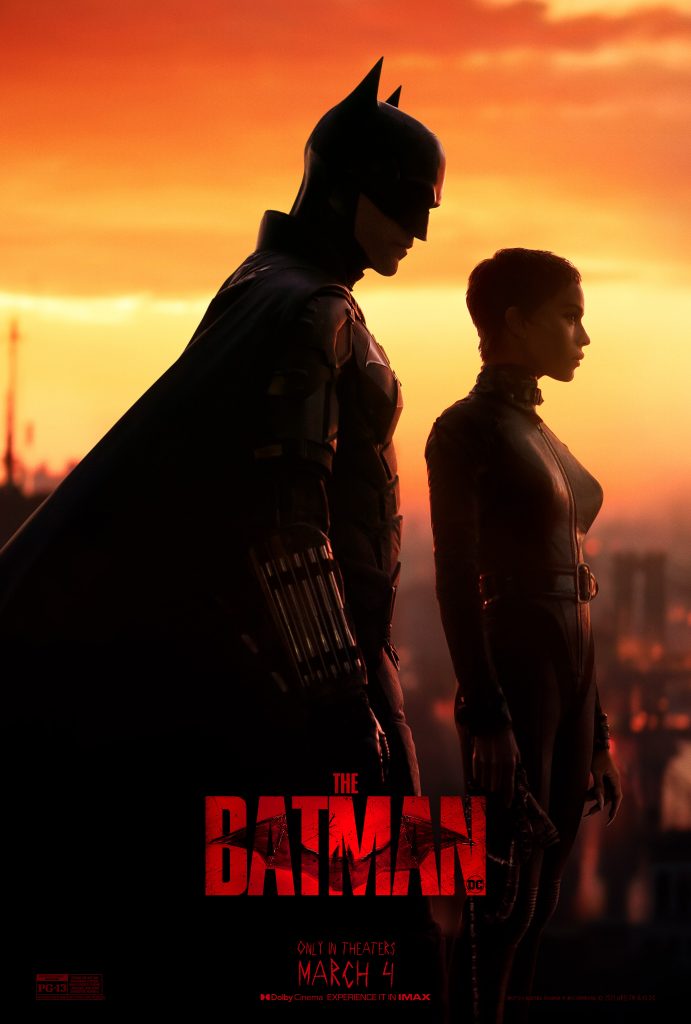 Two years of stalking the streets as the Batman (Robert Pattinson), striking fear into the hearts of criminals, has led Bruce Wayne deep into the shadows of Gotham City. With only a few trusted allies—Alfred Pennyworth (Andy Serkis), Lt. James Gordon (Jeffrey Wright)—amongst the city’s corrupt network of officials and high-profile figures, the lone vigilante has established himself as the sole embodiment of vengeance amongst his fellow citizens.

When a killer targets Gotham’s elite with a series of sadistic machinations, a trail of cryptic clues sends the World’s Greatest Detective on an investigation into the underworld, where he encounters such characters as Selina Kyle/aka Catwoman (Zoë Kravitz), Oswald Cobblepot/aka the Penguin (Colin Farrell), Carmine Falcone (John Turturro), and Edward Nashton/aka the Riddler (Paul Dano). As the evidence begins to lead closer to home and the scale of the perpetrator’s plans becomes clear, Batman must forge new relationships, unmask the culprit, and bring justice to the abuse of power and corruption that has long plagued Gotham City.

THE BATMAN is an edgy, action-packed thriller that depicts Batman in his early years, struggling to balance rage with righteousness as he investigates a disturbing mystery that has terrorized Gotham. Robert Pattinson delivers a raw, intense portrayal of Batman as a disillusioned, desperate vigilante awakened by the realization that the anger consuming him makes him no better than the ruthless serial killer he’s hunting. – Warner Bros. 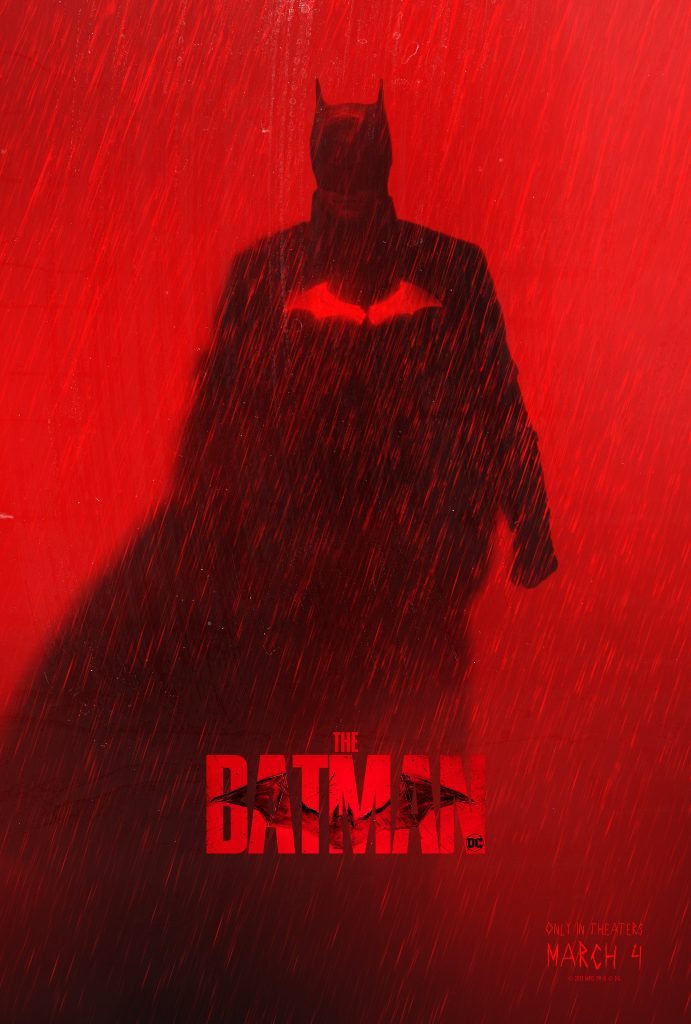 THE BATMAN — by writer/director Matt Reeves and starring Robert Pattinson in the title role — is VERY different from any previous film in the film franchise.  At the same time, it is the most “Batman” of them all — and by a pretty good margin at that.  It’s raw, thrilling, violent (they really do push PG-13), and emotional.

Going in, my expectations were high, High, HIGH.  In fact, in the days leading up to me seeing it for the first time, I started to worry that I was setting myself up for disappointment.

I was NOT disappointed.

I absolutely LOVED this movie.

In fact, it actually exceeded my sky-high expectations.  It punched me in the gut and it hit me right in my Batman fan heart multiple times.

I can also now confirm what I thought was going to be the case with this film: THE BATMAN jibes with my personal Batman sensibilities more than any other Batman movie.  It is more grounded, gritty, street-level, and yes, “realistic” than its seven solo Bat-Film predecessors — and that’s right up my alley.  Additionally, it’s a detective movie first and foremost.

In THE BATMAN, Bruce Wayne (Robert Pattinson) is in the second year of his “mission” in Gotham.  Bruce’s entire life revolved around The Batman.  He tinkers away in his Batcave way below Wayne Tower coming up with new gadgets (and a certain vehicle) that will aid his mission.  He keeps a journal of his activities (which at times, serves the film as a narrator).  At night, he’s stalking the streets of Gotham City.  “They think I’m hiding in the shadows,” he writes in his journal,  “But I AM the shadows.”

Speaking of Gotham, it’s a city that’s not only overrun by crime, but led by city officials that are corrupt at every level in every department — the mayor/city council, the police department, and the district attorney’s office specifically.  And then there’s the organized crime element with Carmine Falcone (John Turturro) as Gotham’s top mob boss.

As the film opens, The Batman is mostly dealing with street crime — muggings, robberies, etc. — and bringing down city corruption and the mob isn’t really part of his mission.   That all changes when a serial killer who calls himself “The Riddler” (Paul Dano) begins murdering Gotham’s most prominent leaders.  Not only does The Riddler leave behind clues to taunt the police, but greeting cards with even more information that are addressed specifically to The Batman.

When GDPD Lt. James Gordon (Jeffery Wright) brings the masked vigilante onto the case — much to the disdain of the police commissioner and other officers — The Batman is thrust into the very center of a case that will rock both Gotham and himself to their very core.

As I said previously, THE BATMAN is a detective story.  If you’ve longed to see that aspect of Batman front and center in a Batman movie, well, you’re finally getting it.  Not only do we get to see the young Batman doing “World’s Greatest Detective” stuff throughout the film, but he does that hand-in-hand with Jim Gordon.  They are truly partners.

I’m not going to discuss the film’s plot anymore — I’ll let you enjoy it for yourself when you see the film.  I will say that what you think is going to happen — based on trailers, TV spots, the film’s synopsis, and even events taking place during the movie — just might not be the way things actually play out.  You’re in for a lot of surprises, trust me.

The entire cast is fantastic.  From the good guys to the villains, the actors in each role all give wonderful performances.  Wright made me root for Jim Gordon.  Turturro made me despise Carmine Falcone.  And Colin Farrell made me like/hate and want to see more of his Oz “The Penguin” Cobblepott.

An important part of every Batman film is the Bruce Wayne/Alfred relationship.  We get that in THE BATMAN, but it’s a bit different than we’ve seen previously.  Bruce is so focused and obsessed with his mission, that he has no time for any personal relationships – including with the man who raised him.  Andy Serkis’ Alfred Pennyworth was in charge of protecting Thomas Wayne and his family.  He feels guilty that he wasn’t able to prevent Bruce’s parents from being murdered.  And he also feels guilty that he wasn’t a good enough father figure to Bruce as he grew up.  Their relationship is a cold one…and it’s not Alfred’s fault.  Will things change between Bruce and Alfred?  I’ll leave that for you to find out, but I will say that it might be an important subplot within the film.

Zoe Kravitz as Selina Kyle — she’s not yet Catwoman, so I can’t call her that…yet — was fabulous.  This is the first time that character of Selina is fully fleshed out in a film.  You get to know her backstory and why she does what she does (besides being a thief, she works as a waitress at The Iceberg Lounge), so it was easy to become invested in the character.  I’m looking forward to seeing more of Selina Kyle — and eventually Catwoman — in the future.  This film absolutely nails the Batman/Catwoman relationship and it’s a very important part of THE BATMAN.

Paul Dano is wonderful as the film’s “main villain,” The Riddler.”  In fact, Dano does for The Riddler what the late Heath Ledger did for The Joker in THE DARK KNIGHT — he reinvents the character and will absolutely turn people’s perception of the classic Batman villain on its head.  This version of The Riddler is a violent, insane serial killer, yet he’s cunning and smart.  He thinks he’s a hero, just like The Batman and doing Gotham a favor.  You’ll have fun hating The Riddler in THE BATMAN, thanks to Paul Dano.  Frank Gorshin and Jim Carrey he is not.

And then there’s Robert Pattinson as The Batman.

Pattinson’s performance is beyond fantastic and he’s a GREAT Batman.  He’s angry, focused, and driven. He’s “Vengeance.”  There is no Bruce Wayne, there’s only The Batman.  He’s also very violent and takes out all his anger and aggression on Gotham’s street thugs.  Will Bruce Wayne ever emerge out of The Batman?  Will he evolve from being simply “Vengeance” to being a “Hero?”  Again, I’ll leave that for you to find out, but I will say that THE BATMAN is Bruce’s film, totally.

Oh yeah, when I said previously that THE BATMAN is the most “Batman” of any of the Bat-Films, I wasn’t kidding.  Rob Pattinson is in almost every single scene in the entire movie as either Batman or Bruce Wayne, mostly the former.  So, you want to see a lot of Batman Batmanning in THE BATMAN?  Well, you got it!

Cinematically and aesthetically, THE BATMAN is a beautiful film. Gotham — which is dark, gloomy, depressing, and a place where it apparently rains 24/7/365 — is as much of a character in the film as is The Batman himself.  The New York City/Times Square in the 1970s vibe is evident.

Michael Giacchino’s score — which we’ve been able to listen to parts of it already (you can listen to the whole thing HERE) — is a character in the film as well and perfectly fits the story in THE BATMAN.  It’s haunting, beautiful, and very “Batman.”  In addition, Matt Reeves picked the perfect spots to insert Nirvana’s “Something in the Way.”  And, you’ll probably never feel the same way about “Ave Maria” again after seeing this movie!

I adored this movie and  I am ready to see it again…multiple times. I am looking forward to more of this Batverse — “THE BATMAN-verse” — that Matt Reeves is creating on the big screen and on HBO Max.

THE BATMAN is special, an absolute masterwork by Matt Reeves.  It’s Batman on film at its very BEST. – Bill “Jett” Ramey