THE BATMAN is an edgy, action-packed thriller that depicts Batman in his early years, struggling to balance rage with righteousness as he investigates a disturbing mystery that has terrorized Gotham. Robert Pattinson delivers a raw, intense portrayal of Batman as a disillusioned, desperate vigilante awakened by the realization that the anger consuming him makes him no better than the ruthless serial killer he’s hunting. – Warner Bros. 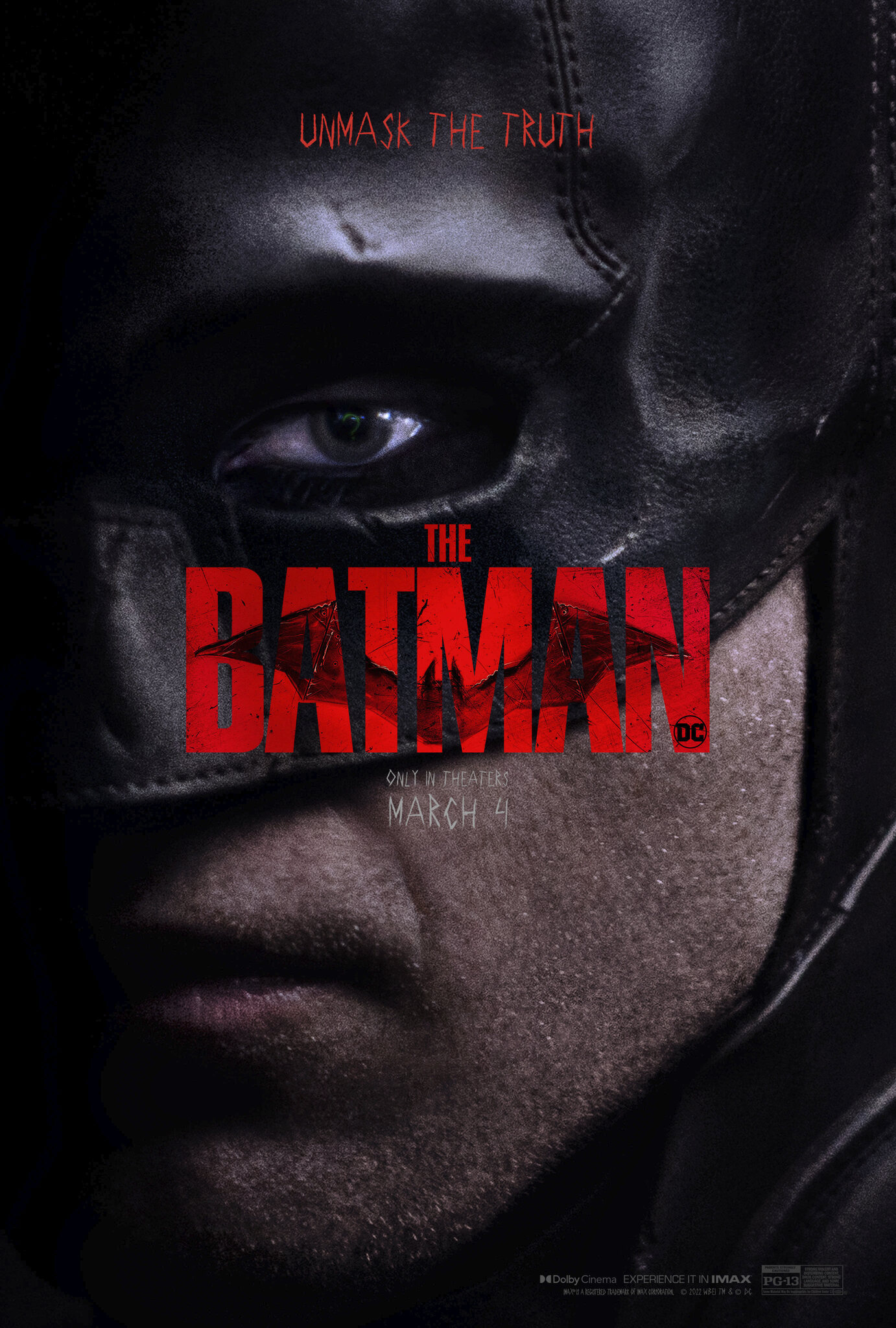 In his film The Batman, director Matt Reeves provides a unique, character-driven, perspective of the circumstances surrounding the complex psychology that drives Bruce Wayne (Robert Pattinson) into his crusading persona, Batman. Although I grew up on – and loved – the Adam West campy, funny television version of Batman, I always wanted to see the emotional pain that drove his actions portrayed onscreen. Well, Matt Reeves has hit this one out of the park.

Since the landmark 1989 film with Michael Keaton, Batman’s traumatizing past has evolved as his primary motivation, on through the Christopher Nolan trilogy to Reeves’s conception. For me, Pattinson’s Batman is the one. I was never satisfied with the dual playboy/Batman character. I wanted something deeper, more of a direct line from childhood trauma to the obsession to oppose evil and make things right. The Batman delivers just that.

Reeves has said in interviews that he based the character on Kurt Cobain, kind of a reclusive rock star and that he envisioned Robert Pattinson in the role from the beginning. As Bruce Wayne, Pattinson shows us a tortured, damaged man who nevertheless feels obsessively compelled to fight for justice for the powerless. Like bats, creatures of the night living in caves, he welcomes the darkness and hides from his pain until he unleashes it on thugs, bullies, and criminals.

Wayne’s inner thoughts are often revealed through voiceovers. Pattinson gives the character a low, even tone that seems powerful, even threatening, despite its contained cadence. Early in the narrative, he says, “They think I am hiding in the shadows. Watching. Waiting to strike. I am the shadows.” His power comes from emotional darkness, thrives on it, and turns his anger outward.

Perfect casting engages the audience from the beginning. Andy Serkis gives us an Alfred who is dryly sarcastic but also rueful. The reason behind his remorse becomes the primary driving force in the storyline. I won’t reveal it here. You will easily connect the dots by the end of the film.

Zoe Kravitz is a revelation as Selena Kyle/Cat- Woman. She radiates seductiveness and danger simultaneously and keeps Batman, and the audience, off-balance. Physically, her movements are undeniably cat-like, and she purrs her dialog, but that purr can turn into a scream in a second. Pattinson and Kravitz exude palpable chemistry despite the impossibility of any lasting relationship – at least in this film.

In The Batman, it’s difficult to keep up with the number of villains since so many characters are tainted with corruption and crime. But the two “formal” villains are brilliantly portrayed by Colin Farrell as The Penguin, and Paul Dano as The Riddler. John Turturro also shines as Carmine Falcone, a regular, Mafia boss-type of foe.

As Oswald Cobblepot (Penguin), Colin Farrell is unrecognizable in a fat suit and facial prosthetics. He’s a thuggish, threatening presence, delivering direct as well as veiled intimidation using a perfect Bronx accent. If you’ve seen the trailers for the film, you’ve seen part of the car chase between him and the Batmobile. Not only is this one of the most thrilling action sequences in the film, but it also gives us a stunning visual of Batman at its end.

Taking demented and eerie to the nth degree is Paul Dano as The Riddler. Dano is mesmerizing as the madman determined to exact vengeance on everyone connected to the event that drives the plot. The Riddler is a kind of quiet crazy, waiting on the sidelines, planning his elaborate revenge. You’ll be overwhelmed by the gripping finale.

Jeffrey Wright does a perfect job as James Gordan, the steady and irreproachable police detective who is Batman’s chief defender. He’s also in charge of summoning Batman when no one else can help. Even though he’s a supporting character, he gets a few nice, dramatic, even edgy moments.

Cinematically, The Batman is impeccable. Gotham has never looked more lost, a reflection of the violence and corruption infesting it. Gloomy and overcast, and with some seriously bad weather, it sets the somber tone so necessary for the narrative. Through the relentless rain and persistent foreboding, Batman becomes a haunting presence, poised to enact retaliation against the criminal and the evil. Although he calls himself “Vengeance”, maybe he’s really Justice. He’s frequently told that Gotham will never change, can never be saved, but he always has the same reply: “I have to try.” He’s the ideal combination of strength and vulnerability.

The Batman runs almost three hours, but I didn’t find that problematic. At first, I was concerned about the film’s pace, but then I realized the technique. It’s a study in contrast – periods of calm interrupted by extreme action scenes, all building to a cataclysmic finale. And what a finale it is! As it settles into the denouement, the falling action is a relief. The closing scene is a glimpse of Bruce’s reality. Showing the physical and emotional connection he wants, it also shows the resolve in his dedication to his mission that makes it impossible- “I have to try.”

Pattinson’s Batman is the complex character I’ve longed for. He’s there like the ominous sound of thunder before a storm. But he’s not the storm; he’s the lightning.

What can I say? In the darkness, there is a light. – Jo Anne Hyde

Ben Affleck Is The New Batman on Film