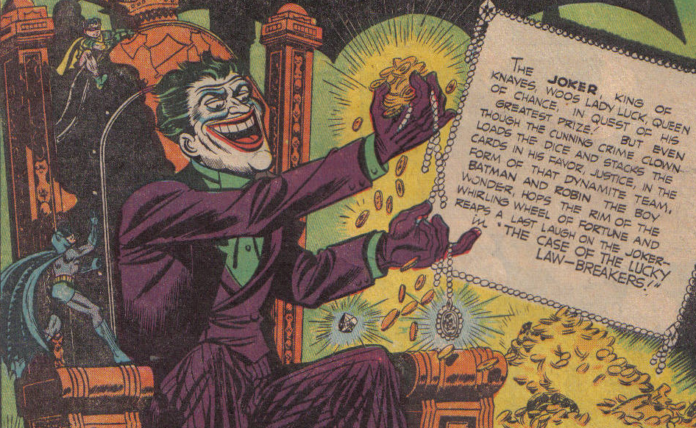 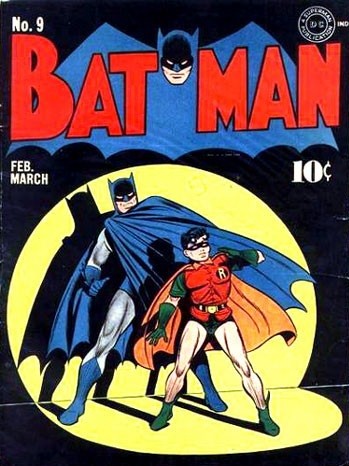 One of the touchstones of The Joker’s interpretation in comics is the first dozen stories featuring the Joker that follow his introduction as a cold blooded killer and his transformation into a clever prankster that would bedevil Batman over the years without falling prey to the morality police. There are a dozen stories that make up this initial introduction, so 2 parts to go after this.

The Story/Comic:  “The Case of the Lucky Law Breakers” from BATMAN #9 (February/March 1942)

The Return: The Joker escapes from prison by swimming underwater and disguising his snorkel gear with a carved wooden duck.

The Plot: The Joker and gang commit a series of crimes and launder the money through rigged games of chance.

Body Count: One via poisoned dart.

The Outthink: Batman and Robin escape from the Joker’s deathtrap and track him down.

The Comeuppance: Batman knocks the Joker in front of a train, only to discover that the train missed him and the Joker has escaped.

I have enormous respect for what Bill Finger accomplished with Batman. And how much of what he first set down is still relevant and sets the mold for today. That said, it must have been a slow month when the best you can come up with for The Joker is a money laundering scheme. Still, even in a rather ordinary story there are a few points of interest.

We can start with the splash page which depicts Batman and Robin opposing a larger than life Joker sitting on a throne amid a hoard of treasure. The Joker as a larger than life villain is a recurring motif of splash pages and, in the near future, covers. The cover of “The Joker’s Five Way Revenge” may be the best example of this motif. In addition, the idea of The Joker being criminal royalty is suggested, perhaps the early seed for the eventual “Clown Prince of Crime” nickname.

Following the splash, we get the better part of a page devoted to The Joker escaping from prison. Presumably it’s a local Gotham prison, but with a large body of water it could just as easily have been Alcatraz. Using a carved wooden duck to disguise an underwater breathing apparatus walks a fine line between practical and silly, but I think it works as an expression of the character. And, as The Joker notes, letting him work in a tool shop is a bad idea for a character as clever as The Joker is. Meanwhile, while news of a bank robbery of $10,000 hits the next day, Bruce Wayne and Dick Grayson decide to check out a theater advertising newsreel footage of Batman and Robin in action against The Joker. Kind of a passive approach to crime fighting after a big bank robbery.

We get a full page of the newsreel recapping The Joker’s exploits. With cameramen retroactively inserted into key adventures. I don’t know if the choices shown are representative of what the creative team thought was most representative, but you get highlights from BATMAN #1, Batman fighting a The Joker atop a train, and sniper Joker from “The Cross-Country Crimes.”

After the newsreel, the plot really kicks into gear. There’s a contest in the theater, with a $10,000 cash prize (the same as the bank robbery). A random game of chance and the two winners just happen to be two criminals recently paroled from the same prison that held The Joker. What are the odds of that? High enough to make Batman and Robin suspicious. (We won’t bother adding in the odds of Batman and Robin being actually there to witness this.) And there’s an announcement that The Joker has escaped and fun and games are over for Bruce and Dick and Batman and Robin ride into action.

The first stop is to visit the theater owner for questioning only to find him dead via poison dart at the hands of The Joker. A quick fight follows where The Joker holds his own just long enough to escape, a contrast to earlier stories where The Joker could go toe to toe with Batman and win, and the plot is in full swing with Batman already noting the connection of The Joker, paroled prisoners, and prize money.

The next move is up to The Joker who announces, via newspaper, who announces that he will be robbing the Midtown Bank that day. As The Joker notes “Any fool can pull a surprise job, but it takes The Joker to do the expected in spite of odds!” Soon a toy vendor is spotted outside the bank without arousing suspicion. Apparently, incompetent Gotham police were not an invention of the Adam West show. Soon, a toy clown marches toward the bank wall and explodes. And, in an otherwise uninspired tale, The Joker pulls off his disguise to reveal his real face beneath it to a stunned bank teller. Those who have seen the prologue to THE DARK KNIGHT will have seen a similar scene and this is an obvious potential influence.

Under a hail of gunfire, The Joker and his henchmen make their escape via car with Batman and Robin in pursuit on motorcycles. But The Joker, in a now familiar ploy, has ditched the car in the middle of the road, which Batman and Robin barely avoid courtesy of overhead tree branches.

At this point, there’s a montage of more robberies and more criminals winning games of chance. With a prominent image of The Joker gloating in front of newspapers with headlines reporting his various crimes. Again, part of the allure of crime for The Joker is to bask in the attention. And newspapers are a recurring record of their battles in these stories, as well as in Tim Burton’s BATMAN. Finally, Batman explains to Commissioner Gordon The Joker’s, rather obvious, scheme. The rigged games of chance are so that the loot can be spread around without being directly traced to the crimes.

Trying to get ahead of The Joker, Batman and Commissioner Gordon plant an item in the paper’s that The Joker’s drowned body has been discovered and is in the morgue. The Joker, due to curiosity and foreshadowing, thinks identifying the body and being “thought dead” would suit his plans. Disguised he walks right into a trap but escapes by bursting through a window and driving off with Batman and Robin hot in pursuit in a commandeered vehicle. Only the joke is on them as they run into a combination smoke screen/knockout gas cloud emitted from Joker’s vehicle . When they awaken Batman and Robin find themselves in a death trap, dropped into a grave which is covered by a suspended slab of rock, and left to suffocate.

We’ll assume for a moment that Batman and Robin just don’t want to take the time to dig themselves out as this “death trap” is hardly one of the more ingenious or reliable ones. Looking to get out in a hurry, Batman and Robin use silver pencils as rollers just under the edge of the slab and using an old engineering trick are able to quickly roll the slab away. Then it’s off to the Joker’s next robbery site, a railroad crossing, where a fight ensues. The Joker is knocked in front of an oncoming train, but when the train passes it’s discovered that he somehow escaped. But Batman vows that they’ll be ready for him when he returns.

What can you say about the big scheme being a money laundering gimmick? At least the rigged games of chance are a Joker-like scheme. The art is solid and the escape at least has some practical basis. It’s a decent enough Golden Age story but never rises much above the pack. The Joker can elevate most stories, but he needs something beyond a random string of robberies to really be exciting. Things will look up in the next installment as a fully developed and character driven scheme emerges. – Robert Reineke

The Batman Book Club Podcast 92: THE LAST KNIGHT ON EARTH