I’ll be honest here, OK?  I’m WAY more excited for SHAZAM! than I am for AQUAMAN — and I’m very much fired-up for AQUAMAN.

Take that for what you will BOF’ers.  ANYWAY…

Here’s another official pic fro SHAZAM! revealed in EW.COM, check it out… 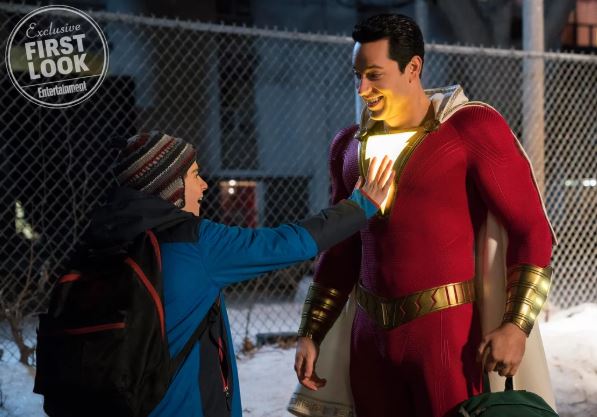 As I said before, I’m digging the vibe I’m getting from this movie — which I’ve been waiting for since my age was a single digit and I was in LOVE with the mid-1970s Saturday morning TV show.

And here’s a quote from the article that makes me happy as well..

In the film, Billy (Asher Angel) is assigned to a new foster home where he befriends comic book superfan Freddy.

I’ve LONG said that SHAZAM! should be its own, crazy, PG-rated, Captain Marvel kinda thing. Tawky Tawny, Mister Mind, the Marvel Family, ALL OF IT!

In this world, superheroes should exist as they do in our world: in comics, on film, in video games, on TV, etc.  Then, Billy Batson — one of US when we were kids — actually gets to become a “real” superhero!”

There’s no need to have this film be set in a cinematic universe in which Superman exists and requires poor Henry Cavill do yet another cameo as Superman in a DC movie. (The next time we see Cavill as Superman should be in a dadgum SUPERMAN film!)

And he’ll always be Captain Marvel to me dammit. – Bill “Jett” Ramey