SYNOPSIS: As “The Joker War” rages on, the casualties are mounting, and the underground residents of Gotham City must deal with the devastating effects of the Joker toxin that’s been pumped into the old city’s tunnel system. Batman must risk everything to guide them to safety, but a familiar face has mobilized these forgotten souls to rise up in anger…and Killer Croc takes no prisoners! 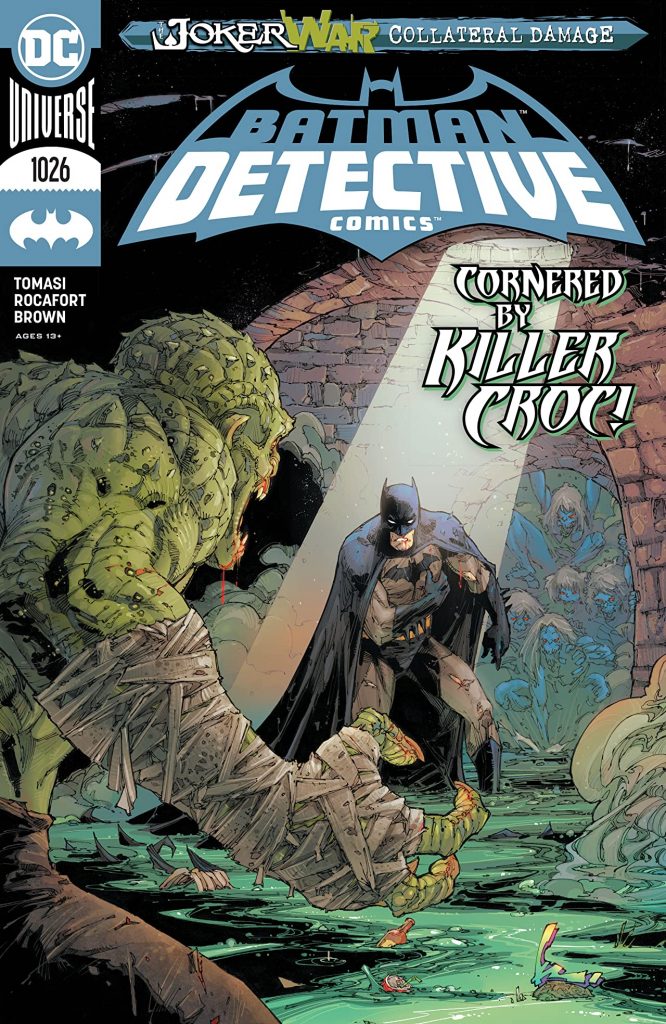 That is how you do it and that is why Peter Tomasi is an all-star writer!  The previous issue of Detective Comics #1025 was lacking, it just didn’t feel like a book written by an amazing writer, it felt like a tie-in book.  Well, no complaints here with issue #1026.  This is the classic Tomasi Batman we have come to enjoy since he took over the title from Tynion.

Now let’s break down the issue!

It only took Tomasi one issue to get right back into form and it works so well.   While the cover claims this is a tie in issue to “The Joker War” it really can stand on its own, much like issue #1024.  Tomasi, much like he has for most of this run, takes Batman back to his basics, what makes him work best.  The answer old fashion detective work and the willingness to help those in need, no matter how much of a “monster” they are.   The premise of the story is simple, someone is kidnapping people and taking them into the underbelly of Gotham’s sewer system and that can mean only one creature is behind this, Killer Croc!

Tomasi nails Batman’s interactions with Gothamites as he follows the screams to Crocs hideout.  The interaction that stands out the most is Batman enforcing his no guns rule with the Brinks truck guard.  While the effects of The Joker’s war on Gotham have left Croc a bit down and out.  I found it refreshing to see Croc play somewhat of a hero in this issue.  Yes, Croc and his crew are out kidnapping people and furthering Gotham into madness.  But it was Croc who after retreating down into the sewers did save this group from death while they were hunkering down during the war.

Tomasi gave Croc some heart here in a weird and twisted way.  As I was reading the issue, I kept thinking back to Zod in MAN OF STEEL, “..And every action I take, no matter how violent or how cruel, is for the greater good of my people…”  Croc sees this group of “monsters” similar to himself, cast out by society for their looks.  It really brings something to Croc when a writer can use him as something else other than a creature of mindless brute force. Croc can be a character as complex as Two-Face.  A man inside a monster and Tomasi blends both sides brilliantly.

Back for the second issue in a row is Kenneth Rocafort and let me tell you this guy is the most underrated artist we have seen on Detective since I started reviewing the book.  Artists like Carmen Carnero, Eddy Barrows, Doug Mahnke, and Brad Walker have all graced us with their artwork inside Detective, but this is my second time viewing Rocafort’s art and I have got to check out this guys catalog.  Right off the bat (no pun indented), we have a wonderful piece of an injured Batman facing off against Croc in the sewers.  What a great cover, setting up the tone of the issue, and letting you know the roller coaster ride you are about to begin.   We are looking off to the side of Croc’s shoulder so we can’t see his face, but we can see the blood dripping down his jaw.  I love the light on Batman as he stands under the manhole, the cover is so simple yet so perfect.

Then you flip open the book and Rocafort opens up with Batman emerging beyond some gargoyles, perfection.  There is a little bit of Jim Lee in Rocaforts’s artwork, stylized with just the right about of detail and shading.  Rocafort has the right approach for Batman, utilizing the cape and the white eye slots heavily.  Good artists portray emotions through the eyes of characters and Rocafort does so effortlessly.  So many great panels in this book of a dark and shadowy Batman and all you can see are his eyes.

Rocafort isn’t one for splash pages, there are multiple panels on every page and not one page is similar to the last, from three long vertical rectangles to, six squares and two horizontal rectangles to five small rectangles and one large square, Rocafort is mixing it up like Funk Master Flex on a Saturday night.  It’s a joy to follow along with, I for one really take notice of panel placement it really can add to the story when done right, and Rocafort nails it here.  The final fight between Batman and Croc is a wonderful display of what Rocafort can bring to an issue.  Four pages of mixed-up panels, heavily stylized with more detail than should be allowed in a panel that small.

It was a real pleasure to read issue #1026 from cover to cover.  Tomasi has been at his best this run when he keeps his Batman and villains simple and classic and I can’t imagine a Batfan thinking anything different.  While Croc may not be number one on many fan’s list of Bat-villains, this was a more than enjoyable read.  Tomasi gave Croc some heart in this issue, going beyond his monstrous appearance.  Artist Kenneth Rocafort has been a wonderful addition to the Detective Comics revolving door of artists.  I really enjoyed the panel placement in this issue as it brought some character and perspective.  It felt like an old school comic book and not an issue of posters.  This is the Batman we all enjoy, and this is an issue that you should not miss at the local comic shop this week! – Peter Verra