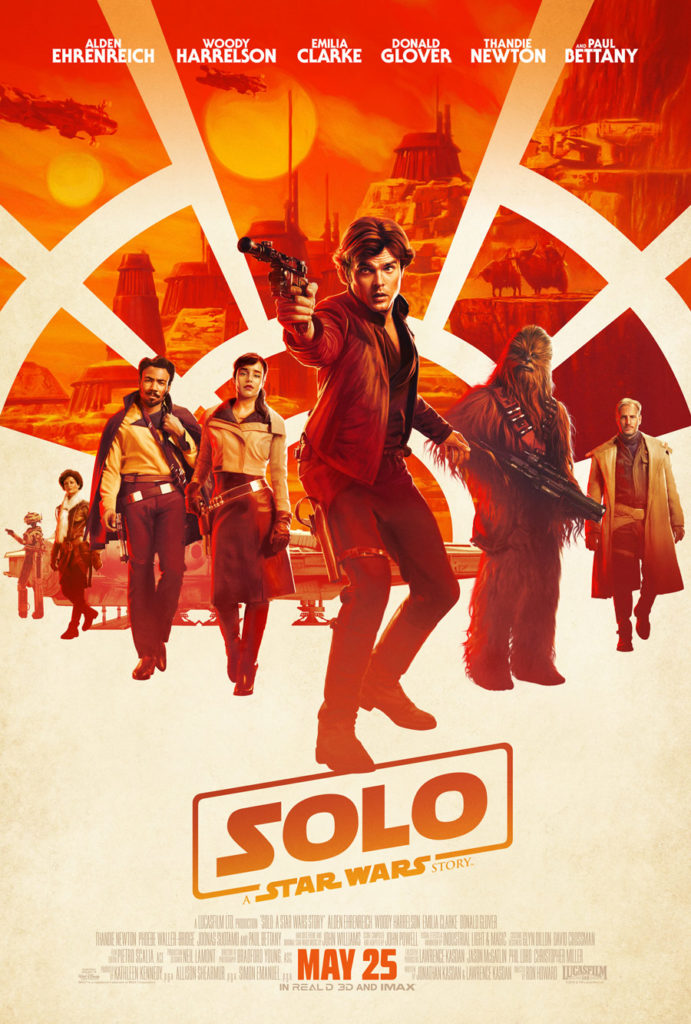 SYNOPSIS: Board the Millennium Falcon and journey to a galaxy far, far away in Solo: A Star Wars Story, an all-new adventure with the most beloved scoundrel in the galaxy. Through a series of daring escapades deep within a dark and dangerous criminal underworld, Han Solo meets his mighty future copilot Chewbacca and encounters the notorious gambler Lando Calrissian, in a journey that will set the course of one of the Star Wars saga’s most unlikely heroes.

There’s an important word in the title of Solo: A Star Wars Story that should be noted before seeing the film: story.

This is not a saga or an epic. It’s a well-told story. It’s good guys and bad guys duking it out, mainly for survival. The closest the narrative comes to philosophy is a shady character, Beckett (Woody Harrelson) telling the young Han Solo (Alden Ehrenreich), “Don’t trust anybody.” The Empire and the Rebellion are barely mentioned. Director Ron Howard and the LucasFilm folks call it a space western.

OK, so it’s pop – not hard rock. That doesn’t mean it’s not enormously entertaining. It’s the perfect summer film – plenty of action and very likeable characters. The actors who play the familiar roles of Han Solo (Ehrenreich), Lando Calrission (Donald Glover), and Chewbacca (Joonas Suotamo) back in the day do a remarkable job. All of them met with and discussed the roles with their originators, and the result is performances that resemble the originals but have enough originality to showcase the talents of the actors.

Alden Ehrenreich performs brilliantly as a young Han Solo. He swaggers and smooth talks his way out of trouble most of the time, but he’s also up for a good fight if the need arises.

As the film begins, he and his best friend/girlfriend, Qi’ra (Emilia Clarke), are navigating the mean streets of the desolate planet Corellia where they barely survive as gutter rats. Their one aim is to get off the planet. On Corellia, there’s always the risk of being enslaved by the planet’s quasi-amphibian queen, Lady Proxima (voiced by Linda Hunt), or of being caught by Empire Storm Troopers.

Eventually, Han signs on for risky heist which eventually leads him to Chewbacca and Lando Calrissian. Clarissian’s self-made droid, L3-37 (Phoebe Waller-Bridge) provides some hilarious banter. Han’s acquisition of the legendary Millineum Falcon is an integral part of the narrative.

Of course, there are the near misses and implausible escapes, dizzying action scenes, and some unexpected outcomes. You’ll have to see the film to find out if the “heroes” are successful. One thing about all the characters that will strike you is that the line between good guy and bad guy is quite thin.

Some characters could have used a bit more development.  More background on Han Solo himself would have also been useful. Who were his parents? How did he end up abandoned and on his own at such an early age? He merely says that he has no family and doesn’t know who he is.  We’d also like to know how he ended up on Corellia.

Those matters aside, Solo: A Star Wars Story doesn’t disappoint. Alden Ehrenreich and Donald Glover are both so charismatic that you long to see more of them. I’m hoping we’ll get that chance! – Jo Hyde