SYNOPSIS: “The Joker War” explodes with an assault on Wayne Enterprises! The Joker has taken control of Waynetech R&D-and with it, all the weapons hidden in its sublevels-plus Lucius Fox as a hostage! The Joker and his clown-masked henchmen are now using Wayne Enterprises as an armory, using sophisticated 3-D printers to produce weapons to rule Gotham City…but Batman and Batwoman might have something to say about that. It’s all-out action in this nonstop issue! 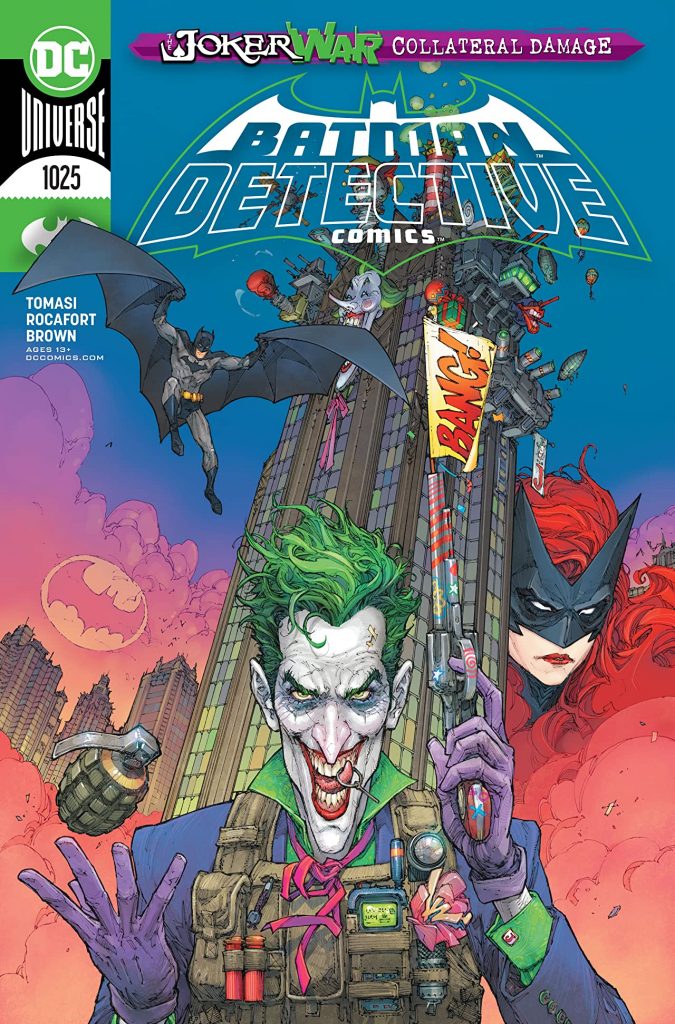 “The Joker War” has taken over the Bat-books for the summer and there are tie-in issues galore.  Last issue, #1024, was a unique case where the issue was able to stand on its own.  Not feeling the repercussions of trying to fill in the gaps or take the writer out of their zone trying to finish someone else is work.  Sadly issue #1025 has just those problems.

Issue #1024 had shock and awe, villains and heroes, but most importantly it had its own story to tell.  Here in #1025 it just feels like Tomasi is not in rhythm. We all know Tomasi is an A-list writer, a big name that has left his impact on not just Batman but DC comics as a whole.  This issue just doesn’t feel like Tomasi, not one bit.

We get plenty of Batwoman and her trademark military approach as she walks us through what has been happening previously in “The Joker War.” This almost feels like a Batwoman book with Batman having taken the role of co-star on his own title.  While this issue is all about brute force, it makes me miss that finesse that I have grown to love about this Tomasi run.  I miss the detective work and personal motivations that Tomasi has crafted his run on.   This issue feels like Tomasi is cramming in this tale while he is waiting to get back to his classic Bat-stories.  Batman, in this issue, just feels off to me.  Tomasi has been writing a Batman that has been brought back to the basics, investigating crimes, vintage villain showdowns, and a Batman who is more than his utility belt.  The Batman in this issue seems like the opposite, a one-trick pony, a billionaire with tech.  It feels like a huge step back from what we have been getting in Detective recently.

We have a new artist for this issue of Detective Comics, Kenneth Rocafort.  I dig what Rocafort brought to this issue, a crisp, clean brand of artwork.  At times I felt like I was looking at Frank Quitely’s artwork, especially the closeup panels. The style these two have feels very similar to me.  The splash page of Batwoman taking on The Joker gang is fantastic and enhanced buy the cool floating panel placement. Rocafort does a damn good job on Bullock, he looks like a portly Dick Tracy with that fedora.  What’s not to love? Bullock covering behind a gravestone, shotgun cocked and stogie ablaze, that’s a damn good Bullock if you ask me.  The book is not heavy on action, the graveyard scene with Batwoman really takes the cake.  Batwoman flying in on her motorcycle, working with the cops taking down thugs like a scene from John Wick, it was 100% Grade A badass!

Batman and Batwoman’s rescue of Lucious Fox is the next best action scene and while not bad it just feels very generic.  I’m not saying that because of how it was drawn as much of how it was told.  I think the story would have benefited from a more tactical approach rather than the battering ram Rocafort had to draw, this is more of a knock on Tomasi.

Did you happen to catch any of the Easter eggs Rocafort has sprinkled around the issue?  There are nods to Todd Phillip’s Joker and Frank Miller’s The Dark Knight Returns that are scattered prominently throughout the issue. Let me know in the comment section below if you can find any more. I always enjoy it when an artist drops winks and nods no matter how big or little.  It’s just great to see worlds collide for lack of a better term.

I can say that issue #1025 of Detective Comics definitely feels like a tie-in issue.  Detective has been tieing into “The Joker War” since #1022 so I feel like we were due for a clunker.  While I like how Tomasi wrapped up his Two-Face tale to fit in with “The Joker War” that is featured over in BATMAN. I do wonder what happened in this issue, it almost feels like Tomasi was just not feeling this part of the story himself.  We have one more tie in issue on the Detective side of this crossover so I am really interested to see how Tomasi bounces back.  We are also two issues away from Detective #1027 which marks the 1,000th issue since Batman’s first appearance.  Now that is what I am honestly looking forward to! – Peter Verra