SYNOPSIS: The Batman knows his enemy. He knows what his enemy wants. What he doesn’t know is why. Can the Dark Knight get inside the deranged mind of a man waging war on Gotham City’s justice system? 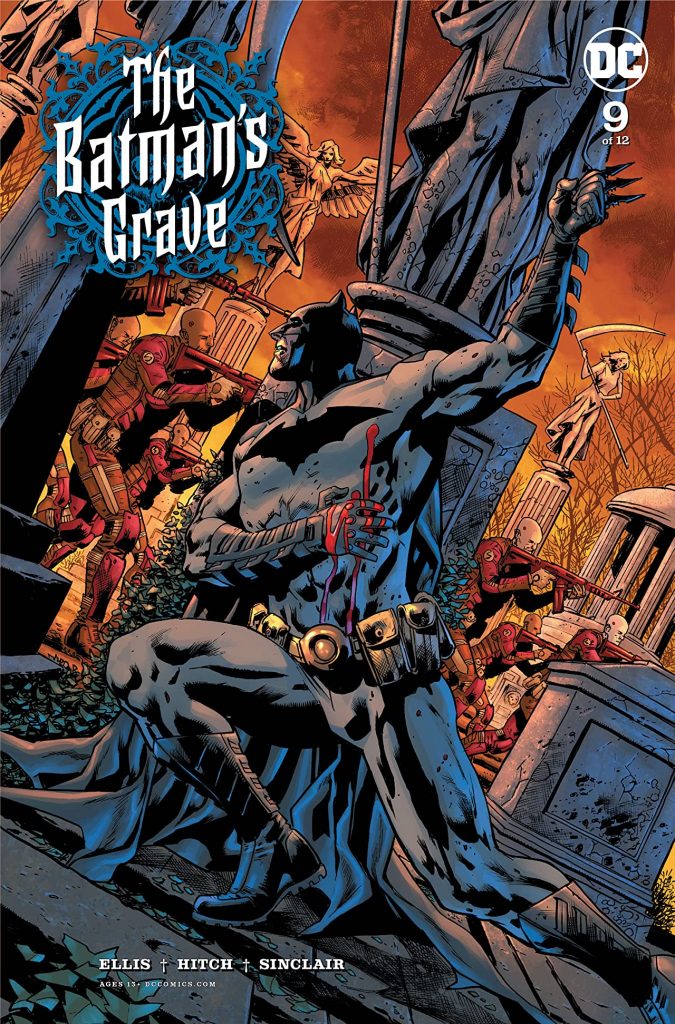 The Batman is in charge of Arkham Asylum! So, what does he do? Drugs everyone to sleep! That’s certainly one way to get some peace and quiet, but what would this Alfred say about his methods?

With all his downtime, Batman has constructed a “serial killer wall”, with Scorn at the center. Not only does this help the Dark Knight Detective with his thought process, it serves as a great visual aid for the reader as well, reminding one of all the story beats thus far.

It’s not long before the Scorn Army strikes again, this time lone gunman…with a rocket launcher. Fortunately, Batman had two of his “Bat-Hound” drones guarding the asylum, the first of which takes one for the team, saving Batman and Gordon.

Batman calls the other hound in so he can make a daring leap at his would-be assailant. With the Dark Knight catching a ride on it, we finally get an idea of just how big these drones are. They’re HUGE. No wonder Gordon says they’re scaring the crap out of his city. I had assumed they were a lot smaller, but they’re at least SUV sized.

The action of this issue is very brief, despite it spilling out across eight pages. Hitch’s artwork is brilliant as always, but overall the issue feels lacking with so little going on.

What does work is the attention spent on Batman’s injuries. Gordon starts it off with an observation on the Dark Knight’s walk. Then there’s Hitch, who depicts the Caped Crusader rubbing his shoulder a few times during the issue. The topper is Batman, having landed flat on his back on a police cruiser, moaning out in a clipped fashion that he can’t feel his legs. Not only does it immediately call to mind his injuries from “Knightfall,” but it serves as a reminder just how human, how mortal, this Batman is. In a book where anything can seemingly happen, it helps the tension that you believe Bruce is in legitimate peril.

The issue closes with another scene of Bruce and Alfred talking the case out. At this point, it came off as filler to me. The dialogue is sharp, the art and coloring are at their usual standard, but this installment just seems like it’s treading water till the next one. It shouldn’t be like that as we enter the final third of a story. The opportunity of having Batman run Arkham feels wasted, as well. I wouldn’t say it’s a bad issue, just an unfulfilling one. – Javier E. Trujillo