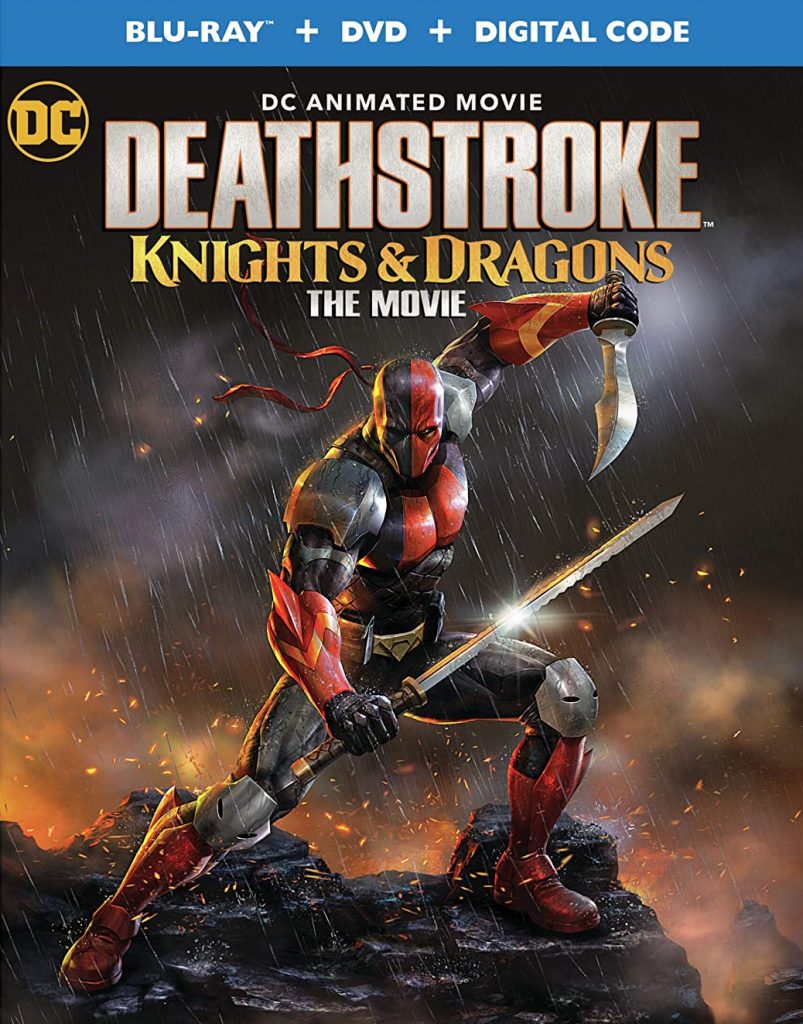 Over the past decade, Deathstroke has elevated to a top-tier character in DC Comics. Whether it’s an adversary to Batman in a video game, or to Oliver Queen on television, or a brief appearance on the big screen opposite Lex Luthor, Slade Wilson has evolved from a “who?” to an “Ohhh.”

With this “promotion” comes his own DC Animated movie, DEATHSTROKE: KNIGHTS & DRAGONS, available now on digital and August 18th on Blu-ray/DCD. Having aired (at least the first 38 minutes) on The CW Seed app, the movie is now collected as a near hour-and-a-half action-packed, bloody film that does some really good things.

Non-spoiler summary: Slade Wilson lives a double life as a family man, and a self-healing mercenary. Unfortunately, as always, both lives overlap, and a traumatic incident forces Slade to choose one life. Fast forward ten years, where the past catches up with him (as it always does), and he’s forced to confront the choices he made to prevent a major catastrophe.

Let’s start with the positives. Deathstroke is known as a fierce, methodical, relentless killing machine and that is on full display here. The fight scenes are flat our awesome, and there’s plenty of blood and gore splashing in every frame. The character has a reputation, and this movie backs that up in spades. Michael Chiklis (THE WIRE), Nathaniel Barnes from Pete Verra’s favorite show GOTHAM) delivers a badass performance as the mercenary. His voice is deep, direct, and at times threatening. I really dug it.

I focused on 38 minutes above because that’s where the movie kind of takes a turn for me. We get a lot of great story setup, payoff, and twists, leaving me a little on the edge of my seat and excited where we were going to go the back half of the movie. What played out left me a bit fidgety, spacing out, and ultimately feeling “meh,” It’s like the filmmakers knew how they wanted to set up the movie, but didn’t know how to finish it. We’re dealt A LOT of exposition, which really slows down the pacing. The focus also switches off of Slade, which I find a problem when he is the star of the movie. He’s definitely the star for the first half, but shares equal billing with others the rest of the way. I understand we needed the information for the rest of the movie to work — and some of it does — but was just done in a less-than-thrilling way.

Overall, I did enjoy this movie. It’s got some great fighting and delivers on its R rating. Deathstroke is lethal and voiced to perfection by Chiklis. The story just takes a detour into explanation land in the back half that prevented this movie from reaching “good,” keeping it “OK.”

Rent before you buy. – Ryan Lower