SYNOPSIS: The story of Two-Face reaches its end, and Harvey Dent will at last find peace after decades of schism. But will that peace be in death, or in the chance at a new life? All along, The Joker has been the puppet master behind the torment of Two-Face, and he knows how to make an entrance! Don’t miss the final battle between Batman, Two-Face, and Lincoln March, with a shocking conclusion that will split you right in two! 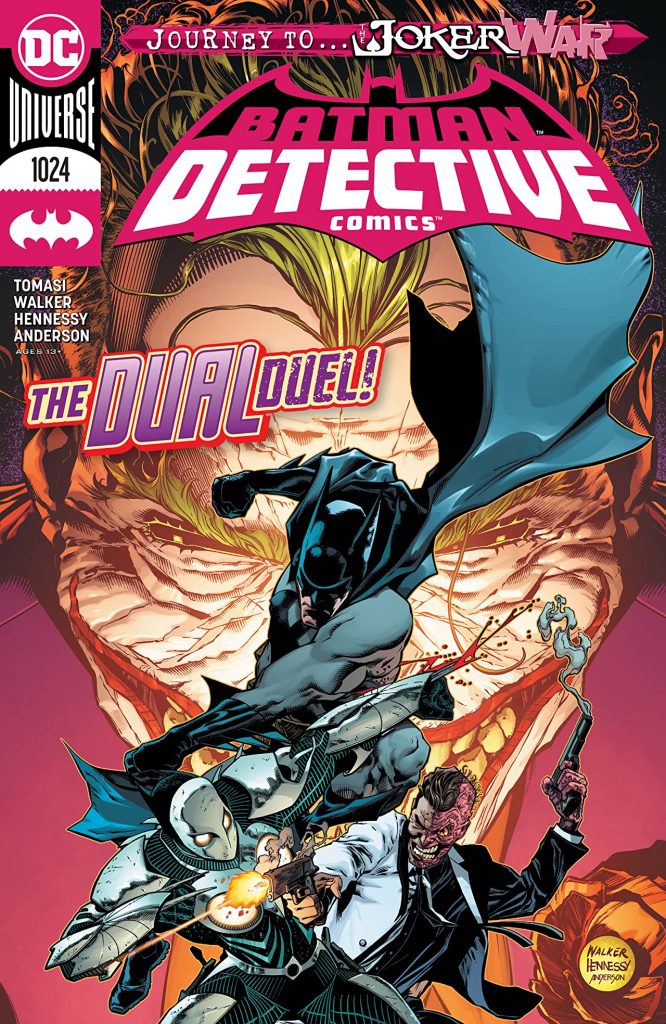 “Joker War” is here, and this is a big week for the Bat-event of the summer.  The main event takes place in Batman while we get two tie-ins this week in Batgirl #47 and Detective Comics #1024.  As The Joker said in Batman ’89, “It’ll be a hot time in the old town tonight!”

Now let’s get right into it!

The last issue of Detective ended in tremendous splash page fashion.  Harvey Dent and his cult just raided the GCPD and old Harvey traded in his six-shooter for the Snyder/Capullo Bat-mech suit that Gordon once wore.  I must say I was surprised at how much I enjoyed seeing this go down.  Harvey is having the time of his life blasting anything and everything that the Joker and Talon can throw at him.  But it’s the relationship with Batman and Dent that take center stage.  Even with a bullet in his head Harvey Dent can listen to reason and his old friend Batman seems to be the only person who can reach him.

Tomasi’s Joker is doing his best interpretation of Jigsaw from the Saw horror films, perfectly manipulating anyone and everyone just for a few sadistic laughs.  While this is a story about Dent and Batman, the Joker is offering a “director’s commentary” for the ages.  Seeing the Joker relish in his work is a wonderful thing to behold, his twisted jokes, the pure enjoyment as he watches the chaos through Talon’s POV.  It’s just a perfect interpretation and I have as much fun watching it go down as Mr. J does.

I have one nitpick in the book and that is seeing Batman perform brain surgery in the field, just a bit too far-fetched for my personal tastes.  I praised Tomasi for his ability to write a Batman that does not rely too much on the utility belt. While excelling at that just a few issues earlier I won’t let this take down my enjoyment of this issue. Because let’s be honest, even Joe DiMaggio swung and missed, on occasion.

The book has one of the purest Batman endings in most recent memory.  After Batman “cures” Dent.  We see a Dent offering help to those less fortunate, we see a Dent who is following his passion from behind bars, offering his services to those who need it most.  But it was a heartwarming cameo from Matches Malone that really brought a tear to my eye.

Once again Brad Walker is up to the task of this action-packed issue of Detective.  No one draws an angry snarling Two-Face better than Walker.  Perfectly on display is the pain and angst of a man caught between two minds. At times as I flip through the book, I catch vibes of Cain in Robocop 2.  Watching Dent channel his anger is always a pleasure to behold and he is thoroughly enjoying having all that firepower at his disposal.  The action in the book is top-notch as Batman and Talon pummel each other to see who is the last man standing in a wonderful fistfight.

Seeing The Joker sitting in front of his 80-inch tube tv is just the perfect comedic tone for this insane clown.  It is almost like it was ripped out of the 1970s — a brilliant nod to that era of comics.  Sitting on the floor right up in front of the TV in his amazing socks, this Joker looks like he is enjoying his Saturday morning cartoons.  Enjoying every bit of the destruction that he caused, what a thing for comic book readers to behold. Those curled up corners of his mouth, those black eyes, truly terrifying.  Walker might have just skipped over Neal Adams for my favorite Joker.  Yes, Walker’s Joker is that good!

Detective Comics #1024 is really great at multitasking.  On one hand, we get a splendid conclusion to a Harvey Dent/Batman arc; and on the other, we get The Joker on full display in his latest scheme for the soul of Gotham City.

Tomasi nails the relationship with Batman and Dent in this arc and it was a real pleasure to see unfold.  I thought the Waco/cult angle was a nice touch for Two-Face. While his redemption at the end ties this story up beautifully.   Some tie-in books can’t stand on their own and this is definitely one that can, and it does it with ease.

Tomasi wraps up one story while perfectly blending in elements of something greater.  A feat that can only be done by a writer of his caliber.  Walker and Tomasi are a one-two punch that gets me excited when I see their names on the cover, they complement each other so well.  Each excelling at high levels from the first page to the last.

It is a pleasure to read these issues of Detective. This is a book you need on your pull list this week! – Peter Verra