SYNOPSIS: Thirty years after Batman: The Killing Joke changed comics forever, Three Jokers reexamines the myth of who, or what, The Joker is and what is at the heart of his eternal battle with Batman. New York Times bestselling writer Geoff Johns and Jason Fabok, the writer/artist team that waged the “Darkseid War” in the pages of Justice League, reunite to tell the ultimate story of Batman and The Joker!  After years of anticipation starting in DC Universe: Rebirth #1, the epic miniseries you’ve been waiting for is here: find out why there are three Jokers, and what that means for the Dark Knight and the Clown Prince of Crime. It’s a mystery unlike any Batman has ever faced! 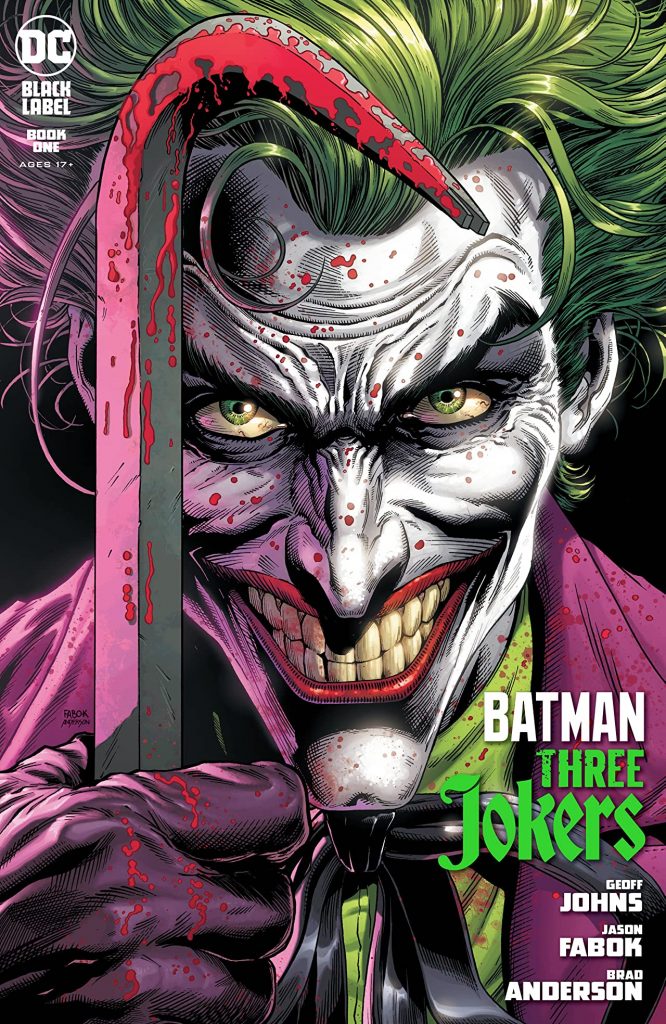 After years of high anticipation, DC Comics has released the first chapter of BATMAN: THREE JOKERS, feeding comic book fans who have been fasting for an epic story. I’ll tell you now: this first issue is filling.

I don’t want to spoil ANYTHING so I’ll just say the question asked above is a good summary. There are three murders, apparently committed by the Joker, at the same time. How can one, easily identifiable man, be in three spots at the same time?

Batman is on the case, but he isn’t alone. Through happenstance, he unites with Batgirl and Red Hood; two people who have experienced extreme horror at the hands of the Clown Prince of Crime. Together, can they make sense of this mystery?

Geoff Johns first planted the seeds of this “three Joker” concept during the Darkseid War at the end of the New 52 era. Fans have been clamoring for answers and Johns has been tight-lipped. I’m glad, as he gives us more than we knew we wanted in these pages, slowly unraveling an eerie mystery while subtly hinting at the character’s iconic history (a short reunion with one character imparticular). The writer is a master at comic book storytelling, and he brought his A-game here.

While we can all pat him on the back, the real star of this show is Jason Fabok. I’ve LONG loved this guy’s Batman work, but was floored at every panel here. It’s obvious he paid respect to Brian Bolland’s work on THE KILLING JOKE, but it never teeters toward copy. Fabok makes every panel his own, and it’s all gorgeous. We get sweeping images outside of Wayne Manor, inside the Batcave, around Gotham, and a familiar factory. His character work on everyone involved is some of the best in years. The artist has been nervous about the book, but he has no reason to. He didn’t just hit a home run, he smashed a grand slam.

I’m overly relieved to say BATMAN: THREE JOKERS has delivered beyond my expectations. I loved this first chapter from beginning to end. The nods to history, character interactions, and intriguing mystery have me hooked, while the art has made me drool. Calling it now; this is DC’s best book of the year.