SYNOPSIS: It’s Superman versus Batman as the deadly machinations of the Ultra-Humanite crash to their end! The Dark Knight has been transformed into a human atomic bomb, all in the name of wiping Superman from the face of the Earth! As Batman struggles against the urge to kill his friend, Superman must undo the damage done and help the other victims of the Ultra-Humanite’s experiments. It’s the thrilling conclusion to “Atomic” that will reverberate across the DC Universe for months to come! 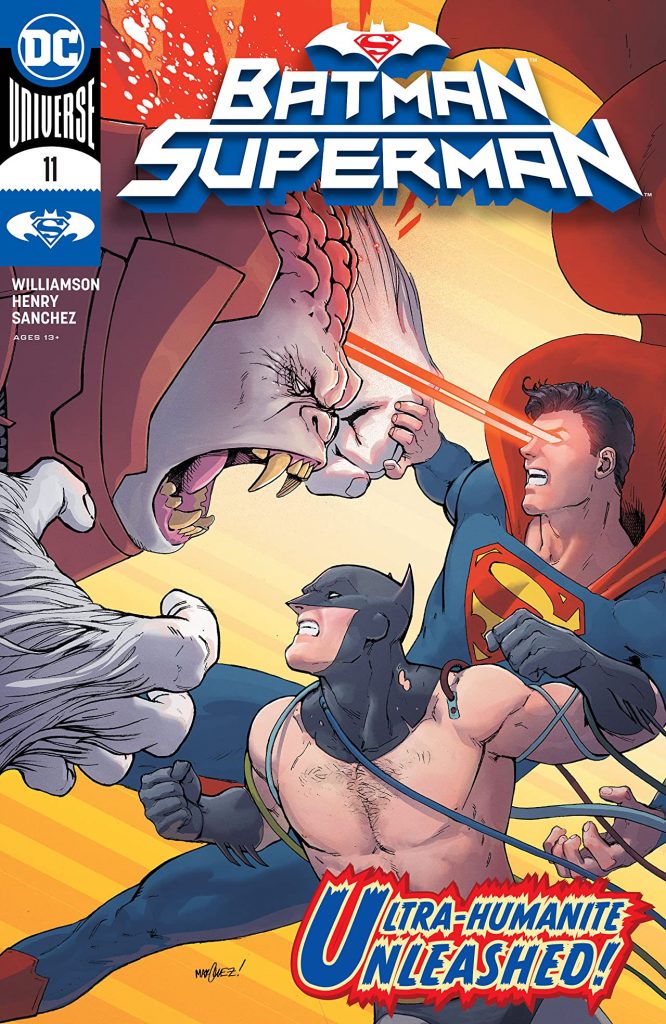 Batman/Superman #11 wraps the current storyline focusing on The Ultrahumanite and the death of The Atomic Skull. It has Batman, Superman, good artwork, and unfortunately, isn’t all that good.

Ultrahumanite has taken over Batman’s mind and body, turning him into a weaponized version of himself, much in the same way he had taken over Atomic Skull in the first part of the storyline. What does he hope to do with a mind-controlled Batman? Why the same thing that every villain wants to do with a mind-controlled Batman of course; he wants to use Batman to kill Superman.

Writer Joshua Williams rounds out this three-issue arc with a few interesting ideas and a whole lot of fighting. Most of the time that’s good enough for me. I’m not a hard sell when it comes to Bats and Supes team-up stories, however, I’ve read plenty of compromised Batman trying to kill Superman stories. In fact, I think I’ve had more than my fill of them. It’s a storytelling cheat, and not one that’s very effective most of the time it’s employed. Superman doesn’t die, and the relationship is left changed in some nominal way…until its back to normal.

The interesting bit that Williams has in this issue is the “why” behind Utrahumanite’s desire to kill Superman. It isn’t to take over the world really. It isn’t because Superman foiled some plot of his in the past. No, the reason here is actually based in some really solid characterization: Ultrahumanite is offended that someone as powerful as Superman would sink so low to pretend to be a frail human. This is an intriguing concept and Williams finds a way to root this team-up tale in current continuity with the fallout of Superman revealing his identity to the world. There is a self-awareness on the part of Ultrahumanite that isn’t seen too often in comic book villains. Its an acknowledgment of his own self-hatred and fear of frailty, turning his negative self-image into rage and murderous intent.

Almost everything else story-wise falls flat and the overall storyline is rendered kind of useless. The battle scenes are fun thanks to the artwork of Clayton Henry. Henry’s style has a linear quality that stretches out scenes and figures while still giving characters a “full” and broad appearance. There is a slightly cartoonish edge to the work despite a more lean and angular approach. There is a kinetic feel to the art which is well used with the pages upon pages of action. He also gets to draw an admittedly silly, but equally cool, scene of Bruce performing surgery on himself!

Overall, this is a passable read but not an awesome addition. I’m hoping this title can move away from Batman vs. Superman stories and find fresh ways to justify there combined presence in future issues. – Garret Grev

OPINION – The Status of Batman on Film Will Be Updated...