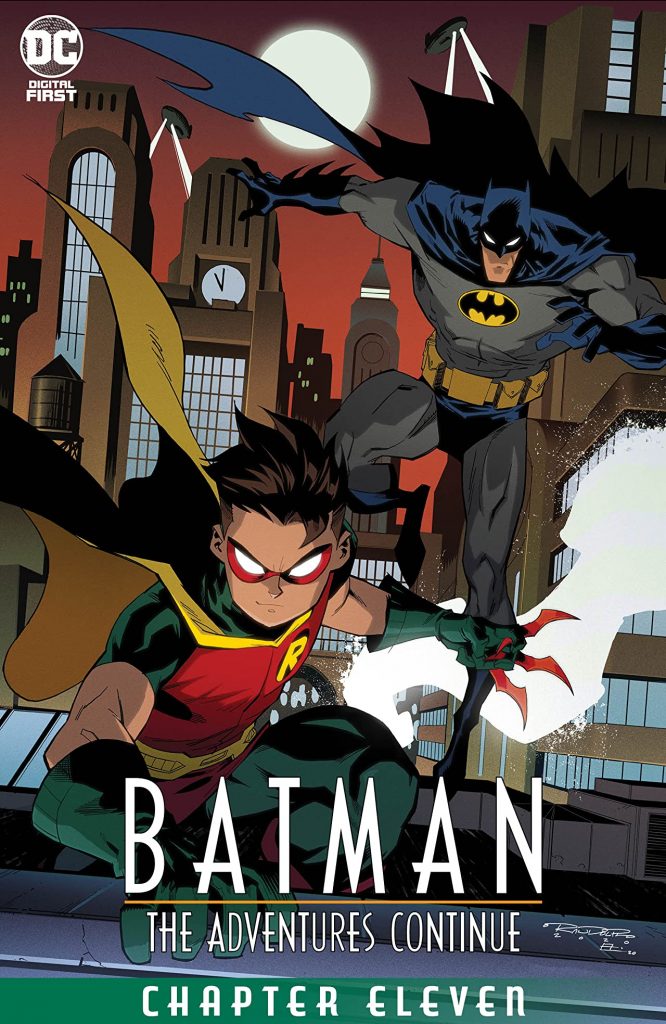 Here we are-the penultimate issue of Batman: The Adventures Continue!

Just when you think things should hit a fever pitch, Burnett and Dini instead go for the gut and kick things off with an emotional character scene. Batman visits Dr. Thompkins at her clinic (R.I.P. Denny O’Neil) to see if Jason has visited her. He hasn’t, the shocked Dr. Thompkins states, as we get treated to a flashback of how close she was with the wayward Robin.

While this scene is great at showing how much Leslie cares for all of the Bat-Family while disdaining what Bruce does, it doesn’t come close to establishing just how far gone Jason was as Robin. That story comes out as Alfred continues to elucidate Tim to his predecessor. As the astute butler tells it, Jason went “from boy wonder…to boy barbarian.”

What follows is a disturbing series of images rendered by Templeton and ably brought to life by the colors of Kubina. What starts with low-level crooks being beaten and bloodied escalates when Jason comes across the more notorious of Gotham’s rogues. Man-Bat gets his wing punctured by the Bat-Grapple, Penguin gets kicked out of a helicopter, and Clock King gets impaled by a clock hand.

While that is horrific enough, it goes even further in the next tale! Jason, as Robin, guns down Killer Croc. And when I say “guns down” I’m talking with a machine gun. It’s only due to his unique nature that Croc barely survives. This isn’t your standard weekday afternoon cartoon fare. The storytellers are pushing the boundaries here, which is an interesting juxtaposition when combined with the Timmverse art style.

As public opinion on The Batman and his associates starts to sway, the pressure is on to track the rogue Robin down. Batman turns to a familiar face-Sid the Squid-who viewers might remember from the episode, “The Man Who Killed Batman”. Sid lets loose the latest rumor-Jason is after The Joker.

The Joker and Harley are having…relationship troubles. Jason comes across the lone Harley and backhands her, drawing blood. This lets the Crown Prince move in for the coup de grace. Jason has a streak of white hair in the final panel, foreshadowing his future look.

This was another stellar entry. I was riveted the whole time. The problem I had with it (if you could call it that) was that I can’t see how they are going to pull off a satisfying conclusion within the confines of one digital issue. We still have to see the conclusion of Jason’s backstory, not to mention the resolution in the present day. I’ve since moved on from the notion that we will see stories featuring The Batman Who Laughs and Vampire Batman in this limited series. Hopefully, this was successful enough to warrant the creative team to return with a sequel. (I wouldn’t be opposed to an animated adaptation, either.)

So, if you haven’t gotten enough of the Harlequin of Hate this year, I highly recommend you give this a read. It’s darker than you would think, with beautiful art and coloring that would make perfect storyboards someday (hint-hint, DC)! – Javier E. Trujillo

THE BATMAN BOOK CLUB #55: “A Lonely Place of Dying”