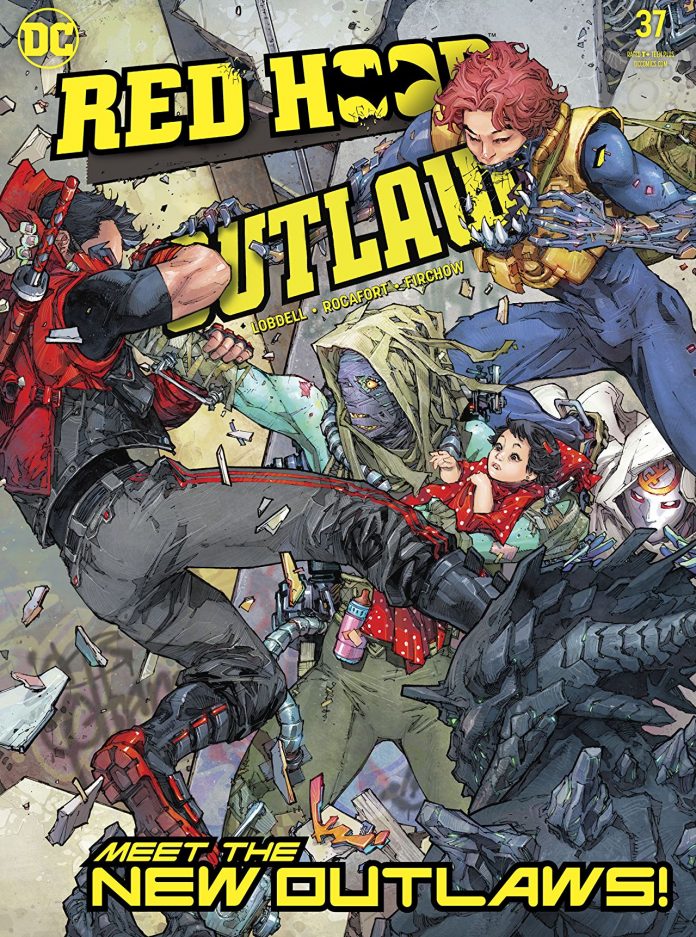 SYNOPSIS: Leave it to Red Hood to get Lex Luthor’s strangest offer of all: to train the next generation of super-villains! Hand-picked for their incredible talents, not to mention their potential to spread villainy and doom across the globe. As the only super-villain in the world to have trained under Batman himself, Red Hood is the ideal instructor. But has Jason Todd fallen so far that he’d take on the task of forging tomorrow’s Legion of Doom or Crime Syndicate—or is he trying to work from within to undermine Lex’s villainous machinations? Even if Red Hood’s heart is in the right place, he still has to butt heads with his powerful and dangerous new pupils. Grab some ammo and settle in for the beginning of the next generation of Outlaws!

Jason Todd has been a great many things across continuities-circus acrobat, street kid, Robin, dead guy, team leader, anti-hero, and even villain. Now comes his greatest challenge yet-teacher. It’s not a character path I would’ve expected him to take. After all, he’s no Dick Grayson when it comes to being a team player and mentor, but given that it’s the “Year of The Villain” certain characters may have to step outside their comfort zone.

The issue wastes no time introducing us to Jason’s class. First up is Babe in Arms, a bright, observant child, held and guarded by her armed mother. Next is Cloud 9, a young woman who can turn cloud-like. She’s followed by DNA, a “genetimorphic sentient strand of DNA” who can shapeshift into seemingly anything. Finally, we come to Devour, a romantic metal eater, who can also shapeshift his body and teleport the group.

This new class tests their boundaries immediately, with Jason offering up his teaching role to anyone who can take him down. Of course, these new upstarts don’t hold a candle to someone trained by the Batman, but they try and make a go of it. Naturally, Jason bests them all and advises they meet in the transport room in ten minutes.

We are treated to a flashback of how Jason wound up redeeming his offer from “Lex Lucifer” that would work a lot better if Jason had an inner monologue, instead of declaring his dialogue into the air. It makes the storytelling feel a bit dated.

Playing into that feeling is the art. Rocafort has the uncanny ability to feel both contemporary and retro. Some of his geometric shapes seem to have leaped off an old Trapper Keeper I used to have for school back in the day. Combined with Lobdell, I constantly felt like I was reading a comic from the early ‘90s. Rocafort’s art is very detailed and vibrantly brought to life by the colors of Steve Firchow. When dealing with a team of potential super-villains, one could give them a dark world to inhabit, but Rocafort and Firchow make things come to life and pop with neon brilliance.

My favorite part of the issue was seeing Artemis and Bizarro. I was just happy to see them included back into the title after their most recent appearance in the annual. The downside to their short scene is no real context is given to where they are or how they are attempting to get home. However, a plot thread is laid down, hopefully meaning we will see more of them very soon.

Lobdell throws this new generation of Outlaws directly into the fire by issue’s end. With only the faintest of introductions, will there be time to get to know them or will they meet their doom facing off against their first mission? At this point, I wouldn’t be surprised if one of them is expendable.

Red Hood: Outlaw #37 has some potential, but comes off feeling half-cooked to me. The appearance of Dr. Shay Veritas feels forced in, just so her creators can use her again. I think the time could’ve been better spent fleshing out the new villains, something next issue will hopefully accomplish. In the meantime, I’ll just continue to enjoy Rocafort’s unique visuals. – Javier E. Trujillo

The End of the Year/Holiday 2018 BOF Mailbag!