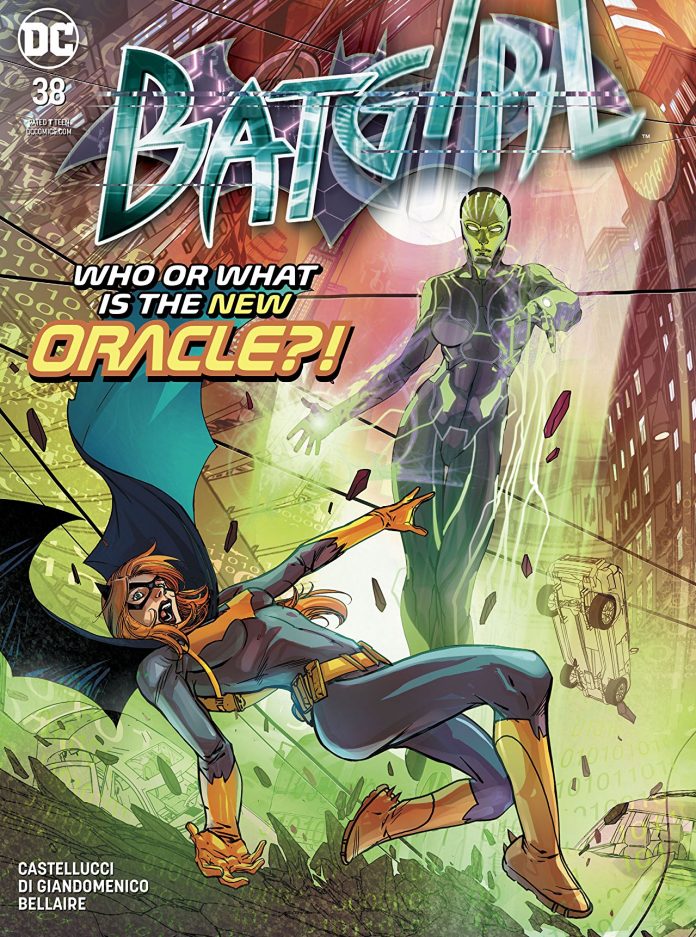 SYNOPSIS: New series writer Cecil Castellucci continues to take Batgirl in an exciting new direction! First up—the Terrible Trio is now a quartet?! After the reawakening of Oracle, the Trio has decided to team up with her and show Gotham City what they’re really made of. Meanwhile, Batgirl has her hands full with a real pest problem: Killer Moth! Can our hero exterminate his evil plans before it’s too late?

Once again, Joshua Middleton delivers an absolutely gorgeous variant cover. He’s been doing consistently great work on this series and I propose that DC hire him for… every cover? On every book from now on? Okay, that’s not realistic. I probably shouldn’t be making these decisions.

To start things off, Batgirl escapes her cliffhanger situation from the last issue, trapped in the rubble of a collapsed street courtesy of Killer Moth. Beaten, bruised and broke, she makes her way home to regroup and recover. The next day sees her back at work with Congresswoman Alejo, Jason Bard, and the gang, before duty calls once more, whisking our hero away to the action!

Meanwhile, Hologram Lex Luthor encourages the reawakened Oracle to find out who she used to be and unleash her full potential. The Terrible Trio, after failed attempts to shut her down, go along for the ride as her reluctant companions/chauffeurs, but always with saving their own hides as a top priority. At one point among these developments, Shark says “HELLA” and it’s quite jarring.

To close things out, Batgirl coordinates a rematch with Killer Moth and takes care of business. Oracle learns of her creator, Batgirl, just as Babs herself decides she needs to reactivate Oracle to learn more about this bad guy contest that Killer Moth has been hinting at. The stage is set for a collision between Batgirl and a dangerous new iteration of her own brainchild.

Okay, most important development this month: Batgirl has a new costume. It’s meant to look very DIY like her Batgirl of Burnside outfit, but even more piecemeal, exemplified by one yellow knee pad and some visible stitches, reminiscent of Michelle Pfeiffer’s Catwoman from Batman Returns. This new outfit shares some design elements with the Burnside costume, such as the short yellow gloves and a cowl that covers most of her head, but retains a grey, yellow and blue color scheme similar to her most recent outfit. That Sean Murphy-designed costume was cool for what it was but never seemed like something she would wear long-term. All in all, I like this new look. It has a classic design with some modern details that give it a more realistic, utilitarian look.

With these new gains, however, comes a tragic loss. We must bid farewell to that mysterious yellow backpack that Batgirl had been wearing, and it appears we’ll never know what kind of lunch it contained. Alas, it is now a secret known only to the gods. – Rob Veatch III

Review – RED HOOD AND THE OUTLAWS #25 by Justin Lee