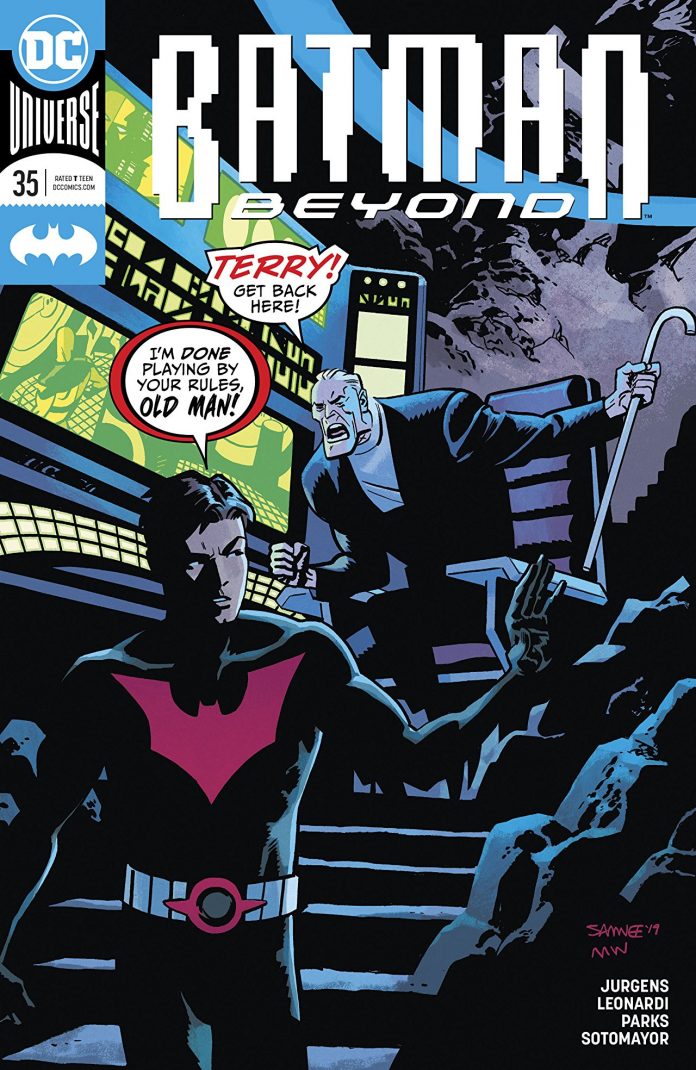 SYNOPSIS: “Lost Days” continues! Move over, Robin! Batman has a new partner, and it’s…the Splitt?! Bruce Wayne and Barbara Gordon join forces to try and stop this madness, but the original Batman may have to call in an old friend to save the day—and his young protégé—this time around.

Dan Jurgens’ tenure on Batman Beyond has been somewhat uneven. His story arcs tend to start fairly strong then fizzle out by the finale. Divide, Conquer, and Kill as a whole, however, is becoming a massive home run and this issue is quite possibly his best since he started writing for Beyond!

False Face-Terry is still running amok, the real Terry still has amnesia and he’s living on the streets, and Bruce and the gang are seemingly still trying to figure out the motive behind False Face. That’s pretty much where the complacency ends. Splitt is heavily featured again and we learn his wonderfully written and quite sympathetic backstory, which False Face attempts to exploit to further his own plans.

Melanie makes a meaningful appearance (read: not just the fleeting love interest) in what seems like forever. Upon my second reading, I can’t help but think that Bruce’s motivations with how he uses her feel just a little Machiavellian. We’re all used to Bruce/Batman thinking 10 steps ahead and knowing what’s going to happen long before it actually happens, so his actions, the outcome, and aftermath with Melanie seem questionable. “The ends justify the means.”

The coup-de-grace, however, is the shadowy figure who shows up in the Batcave, then finally in their full-color glory in a beautifully drawn and colored splash page at the end. I’m not even going to give hints as to who it is, but it should make for an incredibly fun conclusion to this story.

Rick Leonardi’s art has been growing on me in these last couple of issues. There may be a panel here and there where his dimensions get a little wonky, but overall, I’m enjoying his work much more than when he first took over in issue #31.

As I said at the beginning, this is one of the best issues on Jurgens’s run. He’s got all the pieces in place to give us an action-packed, bombastic finale to this arc, and I for one, am incredibly excited to see how he wraps up this particular tale of intrigue! – Matt Whaley