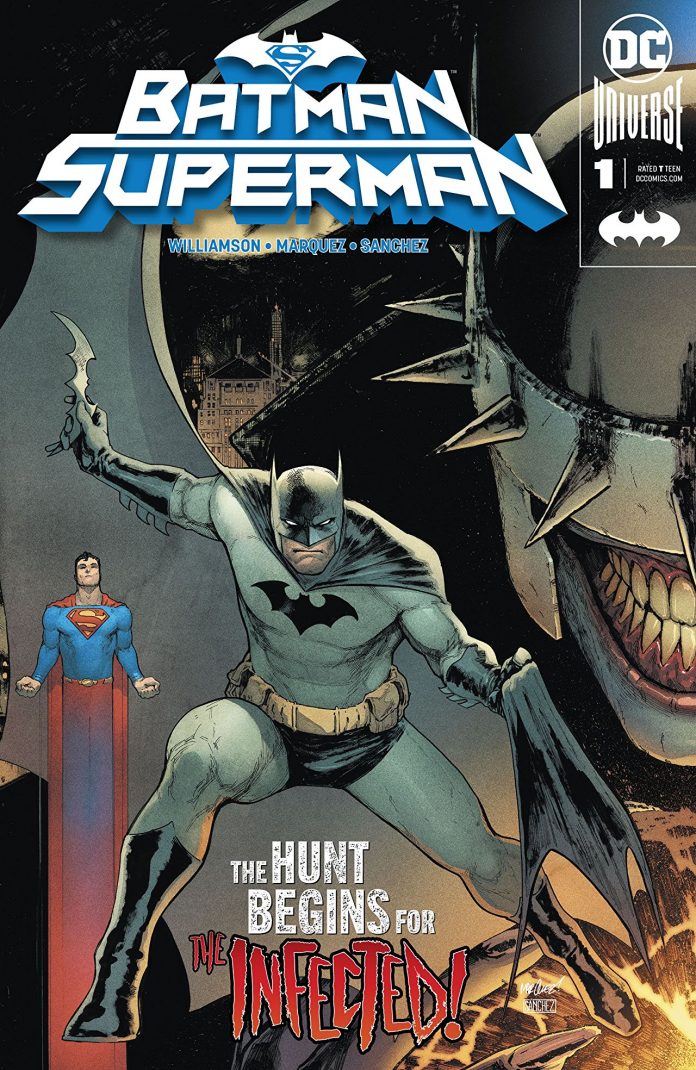 SYNOPSIS: Up in the sky, in the dark of the night, trust no one—for the Secret Six walk among us. Spinning out of the devastating events of the Batman Who Laughs, Superman and Batman are together once more in an all-new monthly series—and they’re facing a terrifying new threat that could strike from anywhere. The Dark Knight and The Man of Steel must journey into the depths of Gotham City to learn which of their fellow heroes has been transformed into the horrifying horseman of their most dangerous and deranged foe ever. Our heroes will need to fight to survive, but an even more dangerous question lurks in the shadows: Can Superman and Batman even trust each other?

Well, that’s how you kick off a new title!

Granted, I may be a bit biased. I love Batman. I love Superman. Sometimes I don’t know who I love more between the two, but I always love a good Batman and Superman story and that’s exactly what we find in the pages of Batman/Superman #1 from writer Joshua Williamson.

The things that this issue gets right aren’t exactly the newest or freshest ideas. We know these two heroes and we know their strengths, weaknesses, and their differences from one another. This is well-covered territory. However, when it’s done right it, these stories give us a deeper glimpse into the two characters by setting the two up to shine, not just through the eyes of the reader but through the eyes of themselves.

The main plot of this issue includes our heroes teaming up to search for a missing child but it’s clear that the stakes much be must higher if 2/3 of The Trinity are needed to take care of business. The story is presented with split narration between the two characters, and while the issue really takes place in Batman’s world, the narrative device allows both characters the spotlight and receive equal focus. The title could just as easily have been Superman Batman #1, but by placing Superman in Gotham and taking on a Batman-centric villain in The Batman Who Laughs, the contrasting dynamic between the heroes flourishes nicely.

The Batman Who Laughs gives us a chance to see how Superman would handle a Batman gone bad, a scenario we’ve typically seen in the reverse between the two. As the story progresses, that scenario is quickly expanded to cover not just a Batman gone bad, but the possibility that every main hero in the DC Universe has. There is a particularly strong twist derived from this premise at the end of the issue leading to a thrilling cliff hanger and an electric closing splash page.

The opening of the book may be the weakest segment, but I understand the logic. The Batman Who Laughs was born out of Dark Nights Metal, and while he was easily its most popular element, it was a storyline that was fairly dense and segmented from the occurrences in the main storylines being told at the time. That is to say, the casual fan may have missed it or lost their way after getting into it. A title like Batman Superman is sure to pull casual and new readers back in and many of them will need an introduction or refresher on who this character is. Functionally, it serves its purposes well. However, it is a bit confusing as to where or when this part of the story takes place and readers may find themselves rereading these pages trying to figure out exactly what is going on here. Outside of some out of place comments by Perry White and a trunkless Superman costume, there is little to show that this intro section is actually a look at The Batman Who Laughs in his alternate dark universe.

That is literally my only complaint on this book. Everything else will rock your socks off.

As good as the writing is, the art in this book is right there with it. David Marquez’s pencils and inks are absolutely beautiful, creating settings rich with atmosphere and commanding use of lighting and shadows. There is a meeting on top of GCPD with Gordon where you can almost feel the city night air of Gotham and one of the best renditions of James Gordon in recent memory. I was particularly impressed by his treatment and design of the lead characters costumes. Marquez is able to show the strength and physique of each character while presenting them is a (somewhat) more realistic fashion, with fabric that largely looks like fabric instead of body paint detailing their every muscle. It adds a bit of realism and touch of Alex Ross to the pencils that really worked for me, as did almost all of his use of texture.

Go buy this book, after a slightly awkward opening it takes flight and never lets up all while giving solid character work to these two powerhouses. The art is wonderful and I can’t wait for issue #2. – Garret Grev