SYNOPSIS: “The Garden of Mercy” part two of two! For the first time, the Justice League explores the planet of the Black Mercy’s origin. One flower is enough to incapacitate even the strongest hero, but with an entire planet full of them, the Justice League must steel their minds or else succumb to the withering effects of the great tree at the core. With Batman unable to cope, can Superman, Wonder Woman, the Flash, and Green Lantern survive the horrors of their souls? 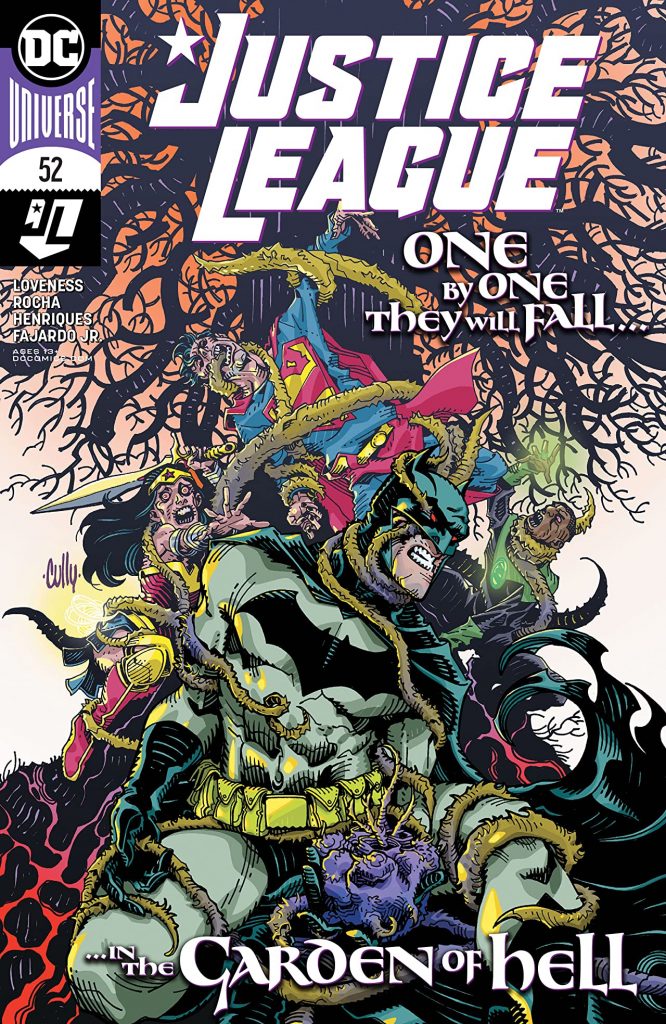 I’m not sure that Justice League #52 was everything I hoped it would be going into it and I’m beginning to look forward to the future when the title has a little more gravity in the larger DC universe.

Part 2 of “The Garden of Mercy” closes out Jeff Loveness’ (of Jimmy Kimmel Live! and Rick and Morty fame) run on the title. I gave Part 1 a very favorable review (which you can read HERE) and while this issue serves as a strong enough conclusion, the wear of rotating creative teams and short format storytelling is starting to show its impact on the title.

Let’s start with the issue itself, which is a fine one. The Justice League has been trapped on a planet of Black Mercy, each captured and infected by the hallucinogenic plant and shown a reality “better” than the one they exist in. Specifically, a reality where they are able to set their proverbial swords down and find peace instead of continuous battle. Of course, they are nothing more than plant food outside of that fake existence and not actually interested in living in a dream world, so…less than ideal for the league.

Even more than Justice League #51, this issue is a Batman story at its core, with The Caped Crusader fighting the Black Mercy and the guise it has adopted as Martha Wayne. Loveness does an interesting job portraying familiar themes; Batman is really at odds with Bruce Wayne’s happiness, Bruce’s life as Batman is not what his parents would have wanted for him, Batman keeps Bruce from being happy, etc. It’s not that the concepts are new, but using Martha and the Black Mercy as the vehicle to deliver them allows Loveness and artist Robson Rocha to create some terrifying and psychedelic images that add to the overall package.

Rocha’s work is a little wild on this one. There are panels that are absolutely incredible featuring ghostly images of Batman and Martha in a dreamlike and supernatural battle of shifting reality. His use of shadows, minimal backgrounds, and texture is fantastic in these sections. Equally strong as the action scenes where he is able to get a feel of tension and kinetic energy conveyed through his line work. Unfortunately, character designs are all over the place, with our heroes looking so different in various parts of the book that I had to double-check that the pencil duties weren’t split on the issue. It’s not horrible but its more than enough to take you out of the story.

Loveness does a nice job connecting using his tale to connect the Pre-Crisis Superman debut of the Black Mercy directly into Superman’s current continuity, which was really quite genius. However, he seemed to be hinting at larger implications to the multiverse, periods in DC history, and the fabric of reality in issue #51 than he followed through within this issue. Maybe those were seeds planted for future harvest (haha), but I was disappointed more wasn’t done on that front.

It could be that I’m expecting too much from these mini-arcs on the title. We’ve been programmed to expect EVERYTHING to tie into the NEXT BIG THING and there’s a simplicity in enjoying storylines for being themselves. It’s probably a good thing to give creators room to tell stand-alone stories in these books, but I have to admit that I’m ready for Justice League to start to matter a bit more as DC’s flagship team book. – Garret Grev