SYNOPSIS: A new Dragon Tattoo story comes to the screen starring Claire Foy (The Crown) as Lisbeth Salander, the fierce, outcast vigilante defender from the acclaimed Millennium book series created by Stieg Larsson, in The Girl in the Spider’s Web. A first-time adaptation of the recent global bestseller, the film is directed by Fede Alvarez, the director of 2016’s breakout thriller Don’t Breathe; the screenplay adaptation is by Jay Basu & Fede Alvarez and Steven Knight.

The girl with the dragon tattoo has lost her edge.

In The Girl in the Spider’s Web: A New Dragon Tattoo Story, Stieg Larsson’s main characters Lisbeth Salander and Mikael Blomkvist are resurrected by David Lagercrantz who has continued the Millennium series since Larsson’s death.

Director Fede Alvarez casts Claire Foy as Lisabeth and Swedish actor Sverrir Gudnason as Mikael, but they lack the edginess and intensity of Rooney Mara and Daniel Craig, stars of The Girl with the Dragon Tattoo (2011).

The film’s narrative suffers as a result.

Lisabeth still operates in Stockholm’s underground society of hackers. She has not seen Mikael recently, and he has fallen out of grace as a writer at his magazine. Lisabeth is hired by a Silicon Valley whiz, Frans Balder (Stephen Merchant), to help retrieve a top secret, potentially lethal program he developed for the NSA. It’s been stolen by a shadowy criminal organization called The Spider Society. Balder’s son, August (Christopher Convery), who is on the Asperger’s spectrum showing savant syndrome, holds the key to accessing the program. Lisabeth ends up as his protector, a job that’s much harder than it sounds.

Delving into The Spider Society will put Lisabeth on a collision course with her troubled past, including discovering that her sister Camilla (Sylvia Hoeks) is still alive. Camilla doesn’t share Lisabeth’s moral core and has more in common with their late, psychopathic father. Flashbacks that attempt to update any newcomers to the series actually just confuse the unfolding of the main story.

That’s one of my main beefs with the film. It’s unnecessarily complicated because of the constant flipping back and forth. 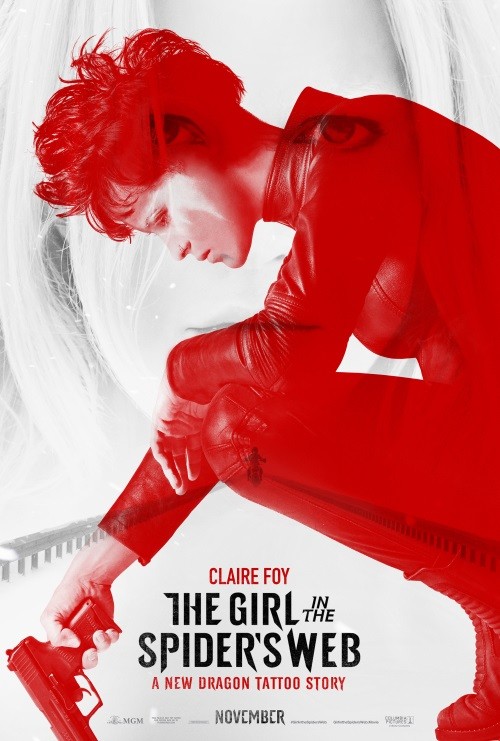 In fact, when a NSA operative, Edwin Needham (Lakeith Stanfield) shows up, it’s difficult to tell if he’s a good guy or a bad guy. Characters come and go without much design, and while the narrative finally attempts to link some of them together, the result is still perplexing.

If you saw the trailer, you saw the best scenes in the film, but that doesn’t mean they were particularly relevant to the plot. In fact, the primary trailer scene, which is also one of the first in the film, of Lisabeth stringing an abusive husband up by his feet and delivering some painful punishment, has nothing to do with the main story. Unfortunately, it’s more interesting than the main story.

Claire Foy is the third actress to play Lisabeth Salander, but she lacks the angular build of Rooney Mara or Noomi Rapace who starred in the Swedish versions. She’s obviously dedicated to the role, but she doesn’t convey the razor-sharp solitary suffering the characterization requires.

The film also suffers mightily from the absence of Daniel Craig who played Mikael in The Girl in the Dragon Tattoo. The baby-faced Mr. Gudnason cannot convey the world-weary cynicism and emotional discomfiture of the Blomkvist character.

The film is relentlessly dark and makes one long for the occasional levity provided by Christopher Plummer’s character in the 2011 film. Too many henchmen also dilute the power of the true villain. The end seems anticlimactic. Explosions and fires are no replacement for character development and a coherent plot.

The Girl in the Spider’s Web was filmed almost entirely in Sweden. Indeed, the mood of the film matches the endless twilight of a winter’s day in Stockholm perfectly. – Jo Hyde